Review: Aaron Sorkin’s new Netflix film ‘Chicago 7’ is like the ‘The Mid-West Wing’

Review: Aaron Sorkin’s new Netflix film ‘Chicago 7’ is like the ‘The Mid-West Wing’ 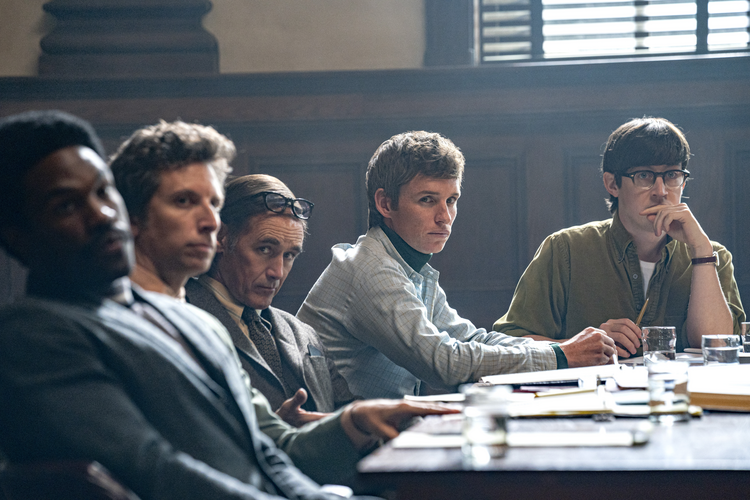 The trial of the Chicago 7—or Chicago 8, if one includes, as one should, Bobby Seale—is still a big deal if, in fact, a presidential administration’s prosecution of its political enemies is still a big deal. At the time, 1969-70, the media portrayed the “event” as a farcical face-off between the two extremes of American political culture, represented principally by the inept Judge Julius Hoffman, who was more interested in propriety than legality, and the radically theatrical Abbie Hoffman, who with his co-defendants was charged with conspiracy to incite rioting at the 1968 Democratic Convention.

The more bona-fide conspiracy, as the writer-director Aaron Sorkin makes clear at the outset of the new Netflix film “The Trial of the Chicago 7,” was the one between the incoming attorney general, John Mitchell, and his Justice Department lawyers, who cooked up a case against President Richard M. Nixon’s very select enemies list and prosecuted it accordingly.

That “Chicago 7” is turning up on Netflix at this precise moment is no accident, the moment being serious.

It is never a bad time to revisit the case. The filmmaker Brett Morgen did so in 2007 with the largely animated documentary “Chicago 10,” a title that also credited defense lawyers William Kunstler and Leonard Weinglass. HBO’s “Conspiracy: The Trial of the Chicago 8” (1987) and “The Chicago 8” (2011) both relied, like Morgen, on trial transcripts. Not so Sorkin, who tells us both more and less than we need to know and has taken “the most important trial of your lifetime”—as Mitchell (John Doman) describes it to the prosecutor Richard Schultz (Joseph Gordon-Levitt)—and shoehorned it into a conventional Sorkin-esque mold, one in which complicated real-life people have become narrative conventions in a movie full of character types and glib dialogue: “A Few Good Radicals,” perhaps, or an episode of “The Mid-West Wing.”

There is no reason why a dramatization of a historical event has to adhere rigidly to history, unless the license taken fails to work either dramatically or as agitprop. Sorkin is more interested in being entertaining than instructive; and the characterizations, despite being based on real people, feel clichéd. Sacha Baron Cohen is, for one thing, too old to be Abbie Hoffman, and his curious accent travels from Lowell, Mass., to London. Jeremy Strong plays Hoffman’s fellow Yippie defendant, Jerry Rubin, as a comedy sidekick.

There is no reason why a dramatization of a historical event has to adhere rigidly to history, unless the license taken fails to work either dramatically or as agitprop.

Tom Hayden is portrayed by Eddie Redmayne as some kind of privileged white political tourist, when he actually grew up the son of a violent alcoholic, was a parishioner at Father Charles Coughlin’s parish church and became a Freedom Rider in the early ’60s. Gordon-Levitt’s Schultz is supposed to be the conservative conscience among the leftie-oppressing Republicans; but this too is a fabrication, and a cheap one.

Frank Langella, who is a national treasure, is one of the few things that really works in “The Trial of the Chicago 7,” even if his Julius Hoffman is something of a fantasy figure. The way the film plays out, his exasperated judge is the addled, elderly errand boy for a system intent on making examples of an all-star lineup of revolutionaries, cockeyed and otherwise. Seale—whose lawyer, Charles Garry, was having emergency surgery and was unable to attend the trial—is denied permission by Hoffman to represent himself, and his righteous protestations so rankle the judge that he has Seale (Yahya Abdul-Mateen II) shackled and gagged for part of the trial.

It is a remarkable moment in the film; it remains a notorious moment in American jurisprudence. Some would call it emblematic of race relations in America. Sorkin allows the prosecutor Schultz to convince Judge Hoffman that having a trussed-up, handcuffed black man standing trial in an American courtroom might make for bad optics, and Hoffman relents. In actuality the outrage went on far longer than it does on screen.

In addition to Langella, there are two other performances that make “The Trial of the Chicago 7” worth watching. (A third would be Ben Shenkman’s Len Weinglass, if there were more of it.) One is delivered by Michael Keaton, who makes much of his small role as former Attorney General Ramsey Clark, whose testimony in a closed courtroom—explaining that the Johnson administration’s Justice Department had already investigated and declined to prosecute the defendants—is kept by Hoffman from the jury.

The other is given by the always reliable Mark Rylance, who as Kunstler seems to be in another movie, one with real emotions and power and an acknowledgement of the gravity of the moment that he and his co-stars are supposed to be in. That “Chicago 7” is turning up on Netflix at this precise moment is no accident, the moment being serious. The movie, unfortunately, is mostly not.