Review: Flannery O’Connor meets Quentin Tarantino in Netflix’s ‘The Devil All the Time’ 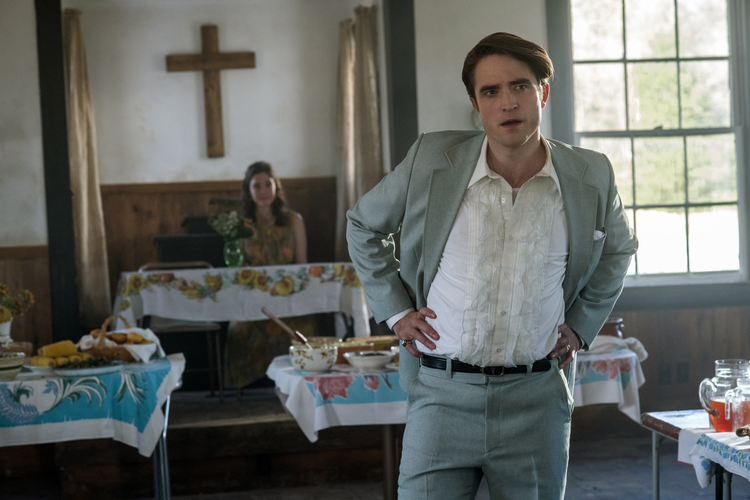 Robert Pattinson as Preston Teagardin in ‘The Devil All the Time’ (photo Cr. Glen Wilson/Netflix © 2020)

To qualify as Southern Gothic, a work of fiction usually involves not just geography but insanity, perversity, some kind of Faulknerian family legacy and at least a dash of religious zealotry. To call “The Devil All the Time” overqualified would be one way of describing it. Others would be “violent,” “dementia-ridden,” “melodramatic” and “profane.” But if you’re attracted by the idea of a film that probes the hair’s breadth between the ritual and the spiritual, the devotional and the obsessive, and the visionary and the mad, this particular movie might well haunt your dreams.

Directed by Antonio Campos from the celebrated debut novel by Donald Ray Pollock (who provides the film’s coolly damning narration), “The Devil All the Time” is a story of fathers and sons, serial killers, religious frauds and fundamentalist lunatics. According to the M.P.A.A., which gave the film an R rating, it contains “disturbing images” (as well as “sexual content, graphic nudity, and language”). But the really unsettling aspects of the story lie beyond the visual or the verbal.

“The Devil All the Time” is a story of fathers and sons, serial killers, religious frauds and fundamentalist lunatics.

The disturbances, so to speak, begin immediately. In the Solomon Islands during World War II, a group of American Marines comes upon a piece of scorched earth littered with bodies, one of which has been left flayed and crucified—but, to the soldiers’ shock, still alive. With no hesitation, one of the Marines, Willard Russell (Bill Skarsgard), draws his pistol and puts the tortured man out of his misery.

Willard is traumatized, not surprisingly, and will be for the rest of his short life. His trauma will be visited upon his son, Arvin (played as a boy by the touching Michael Banks Repeta and later by Tom Holland). It will inform the rest of the movie and in many instances a cast of frequently sideshow-worthy characters. They include Willard’s mother, Emma (Kristin Griffith), who promised God that if Willard returned from the war he would marry her poor, orphaned neighbor Helen Hatton (Mia Wasikowska). It doesn’t work. Charlotte (Haley Bennett), whom Willard does marry, is dying of cancer; and Willard, Arvin in tow, thinks he can save her by praying hard enough and making animal sacrifices on an altar in the woods. It also doesn’t work. Roy (Harry Melling), an itinerant preacher who uses spiders the way others use rattlesnakes, is bitten, has delusions and then kills his wife, thinking he can resurrect her. It definitely doesn’t work.

Almost everyone comes equipped with a religious device, none of them being a compass.

What also doesn’t always work is the way the film passes back and forth in time, between Ohio and West Virginia, and juggles a motley cast of characters that includes the married serial killers Carl and Sally Henderson (Jason Clarke, Riley Keough), whose murderous path intersects with the lives of the others. And Preston Teagardin (the top-billed star, Robert Pattinson), who is a sexual predator in preacher’s clothing (the ruffled shirts are a nice touch). It takes a bit of work to keep narrative- and time-lines distinct. In the third act of the film, though, as Arvin’s story has taken over the movie and the storylines converge, the pace becomes breathtaking and the events utterly unnerving.

But what that long-ago Solomon Islands scene sets up, even if we are only aware of it later, is the way iconography, talismans, ceremony and the fetishization of churchly trappings are going to supersede a genuine knowledge of God throughout the story. The symbols and metaphors may be obvious, but they are potent and dismaying. Is Willard unhinged because he killed a man? Or because he killed a stand-in for Christ on the cross? Preston is given sexual license among the young girls of the congregation because they are blinded by his holy disguise. It is arguable that Sally (“the bait”) and Carl (“the shooter”) practice their own kind of veneration and commemoration because what they are really after are the photographs they take of all the young men they pick up on the road and murder (albeit in grotesque sexual poses).

Almost everyone comes equipped with a religious device, none of them being a compass. And again, even though “The Devil All the Time” will be described as Southern Gothic, and it operates at a sometimes Tarantino-esque level of violence and a Flannery O’Connor-level knowledge of sin, its mayhem is committed in the mind and soul.