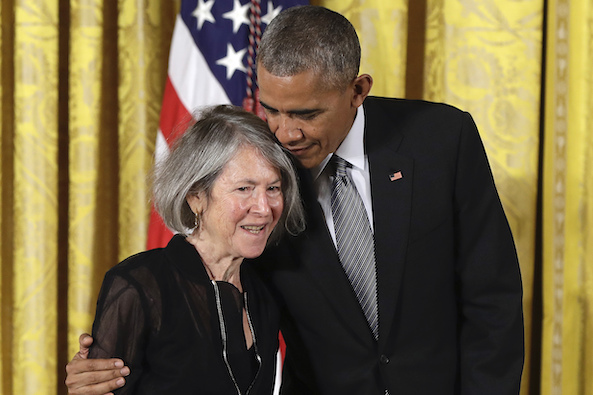 President Barack Obama embraces poet Louise Glück before awarding her the 2015 National Humanities Medal on Sept. 22, 2016. The 2020 Nobel Prize for literature has been awarded to Glück “for her unmistakable poetic voice that with austere beauty makes individual existence universal.” The prize was announced Oct. 8, 2020 in Stockholm. (AP Photo/Carolyn Kaster, File)

When news broke that Louise Glück had won this year’s Nobel Prize in Literature, American poets and readers of poetry rejoiced online. We felt like one of our own had been recognized; a poet who has moved us, a poet who has taught many writers in her roles at several universities. It felt like a banner day, a bright stillness in the chaos of 2020.

Only the 16th woman to receive the award (and the first American female poet to do so), Glück writes poems that seem deceptively simple. The citation from the Nobel committee praises “her unmistakable voice that with austere beauty makes individual existence universal.” For example, two of her oft-quoted lines are, “We look at the world once, in childhood./ The rest is memory.”

Last week on social media, my peers shared pictures of the books of hers they owned—often many, fanned out or stacked high—and described which one meant the most to them. Each had a different favorite, from the collection of The First Four Books of Poems (1995) to the Pulitzer Prize-winning The Wild Iris (1992), the mythical Averno (2006), A Village Life (2009; another Pulitzer winner) and her most recent, National Book Award–winning Faithful and Virtuous Night (2014).

The citation from the Nobel committee praises Louise Glück for “her unmistakable voice that with austere beauty makes individual existence universal.”

My own introduction to Glück’s collections was The Seven Ages (2001), which I read soon after it was published in one of my first graduate classes. I admired how Glück portrayed family conflict in a way that was somehow both personal and universal. “Finally, in middle age,/ I was tempted to return to childhood,” one poem, “Unpainted Door,” says, later concluding, “I remember my childhood as a long wish to be elsewhere.” As the Nobel committee says of her work, “The deceptively natural tone is striking. We encounter almost brutally straightforward images of painful family relations. It is candid and uncompromising, with no trace of poetic ornament.”

The book I return to again and again, though, is The Wild Iris, which takes place mostly in a garden. Flowers, such as the red poppy and the wild iris, feature as speakers, and a gardener and a deity each have monologues about their inability to communicate clearly to one another. In one of many poems named “Matins” (others are “Vespers”), the gardener says,

You want to know how I spend my time? I walk the front lawn, pretending
to be weeding. You ought to know
I’m never weeding, on my knees, pulling
clumps of clover from the flower beds: in fact
I’m looking for courage, for some evidence
my life will change, though
it takes forever, checking
each clump for the symbolic
leaf, and soon the summer is ending...
Or was the point always
to continue without a sign?

The first time I read this poem, looking out over a prairie in Lake Forest, Ill. during a writing residency, I couldn’t help but think of discernment: the ways in which we try to divine God’s messages as we make big decisions, a process that Ignatian spirituality, among others, holds sacred.

Later in the book, in “Sunset,” the deity says, “You have no faith in your own language./ So you invest/ authority in signs/ you cannot read with any accuracy.” That character and the gardener never dialogue in the book, and their separate pronouncements feel like an enactment of the struggle of the spiritual life; two beings whose territories cross only in the natural world, in the growing and dying of flowers and trees and in the rising and setting of the sun (matins and vespers).

Louise Glück’s work is most powerful when she turns to mythology or classical literature to illuminate contemporary life, or otherwise looks more closely at the ways we are connected in the human experience.

I will admit my initial surprise at the Nobel announcement, because Glück’s work is rarely explicitly political, as much of our best contemporary literature can be. In The Conversation, Nikolai Duffy notes that her poetry demonstrates a “preference for the muddiness of everyday life over explicit engagement with their political and social issues.”

However, her poetry is far from apolitical: Prioritizing a woman’s experience within family and romantic relationships as a topic for poetry was a radical act in the late 1960s, when she began publishing—and in some ways, it still is. At the beginning of Vita Nova (1999), Glück’s preface describes how changing perspective can be a revolutionary act:

In recent work, Glück meditates on death and on the aging body. In Faithful and Virtuous Night, her deceased mother says, “We read your books when they reach heaven./ Hardly a mention of us anymore, hardly a mention of your sister,” who died as an infant. Those other members of her family are reunited on the other side of the divide, waiting for her. “I write about you all the time,” she answers. “Every time I say ‘I,’ it refers to you.”

I have also seen several people post a beautiful broadside of the 2009 poem “Crossroads,” which begins, “My body, now that we will not be traveling together much longer/ I begin to feel a new tenderness toward you, very raw and unfamiliar,/ like what I remember of love when I was young.” Glück, whose grandparents were Russian and Hungarian Jews, integrates different stages of life in a way that acknowledges the human dignity of the person at any age.

Glück’s work is most powerful when she turns to mythology or classical literature to illuminate contemporary life, or otherwise looks more closely at the ways we are connected in the human experience. I think of “Midsummer” from The Wild Iris, in which the deity says, “You were not intended/ to be unique. You were/ my embodiment, all diversity,” a good description of the Incarnation itself.

Show Comments ()
Join the conversation: Login or create an account
Before you can comment, you need to update your profile to include your first and last name, as required in our comments policy. Then reload this page and you'll be set up for commenting. Update your profile
More: Poetry / Literature / Books

Lisa Ampleman, managing editor of The Cincinnati Review, is the author of two collections of poems, most recently Romances. Her poems and prose have appeared in the journals Poetry, Image and Notre Dame Review.