Review: ‘Personal History of David Copperfield’ takes a micro approach to a classic 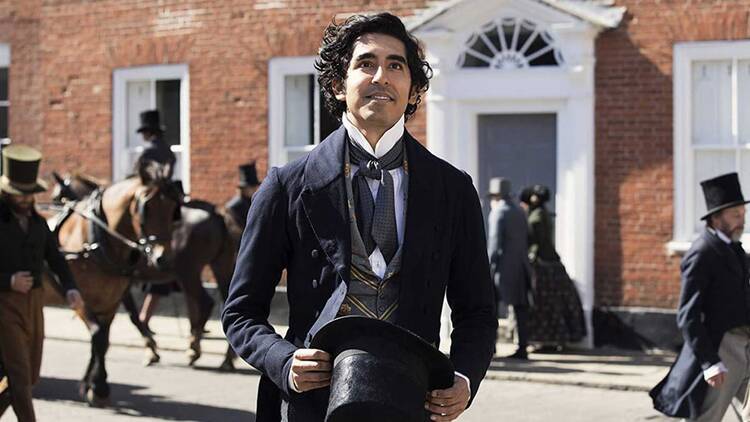 The original title of Charles Dickens’s favorite novel (among his own) was “The Personal History, Adventures, Experience and Observation of David Copperfield the Younger of Blunderstone Rookery (Which He Never Meant to Publish on Any Account).” So at the risk of overthinking it, director Armando Iannucci’s “The Personal History of David Copperfield” may be meant as a signifier of things to come—a more faithful adaptation, in its way, than the sweeping overview you might expect. And, at the same time, nothing you expect.

“Copperfield” on the page or on the screen is a moral fable, the story of a boy growing into a moral man.

Along with “I am Ishmael” and “Stately plump Buck Mulligan...” the novel David Copperfield has one of the more famous openers in literature: “I am born.” Iannucci’s David (Dev Patel) is, in fact, present at his own birth, narrating the natal goings-on from a position just over the shoulder of the kindly Peggotty (Daisy May Cooper) and his mother (Morfydd Clark, who in a gesture of Freudian/Iannuccian perversity also plays David’s first love, Dora). The bookending conceit of Simon Blackwell’s script is that the adult David has become a successful writer of fiction and is giving a reading at a music-box theater in London. Therefore, all the film’s first-person intrusions, dream sequences and narrative what-ifs make sense. Not that it matters all that much.

“Copperfield” on the page or on the screen is a moral fable, the story of a boy growing into a moral man despite the calamities surrounding his birth, his childhood, the abuse of his loathsome stepfather, Murdstone (Darren Boyd), and the oppression from Murdstone’s sister, Jane (Gwendoline Christie). His apprenticeship/slavery at the bottling plant follows. So does his salvation and education via his fearsome yet loving aunt Betsey Trotwood (Tilda Swinton) and her mad lodger, Mr. Dick (Hugh Laurie). He receives quite irregular instruction from Mr. Micawber (Peter Capaldi), a life lesson from his friend/betrayer Steerforth (Aneurin Barnard), venom from Uriah Heep (Ben Wishaw) and love from Agnes (Rosalind Eleazar).

What David learns is that the shame he feels about his lowly origins is the thing he ought not to be ashamed about.

As he traverses the Dickensian world and its often Bruegelesque population, what David learns is that the shame he feels about his lowly origins, as he navigates and circulates among the more well-to-do, is the thing he ought not to be ashamed about, especially since the poor people who have been his friends conduct themselves with much more dignity and charity.

Iannucci, as a writer and/or director, has made some of the funniest and bitingly political screen content of the last decade or more, including “The Death of Stalin” (2017), “In the Loop” (2009) and the sitcom “Veep” (on which he collaborated with Blackwell). He is clearly at home with sprawling casts of characters and comfortable allowing them to chew the scenery when the mood comes over them. Swinton, as is her wont, fairly devours her portion, as do Laurie and Wishaw and Benedict Wong as the alcoholic Mr. Wickfield, who loses his business until an epic confrontation with Heep and all the principals that feels, à la Iannucci, like the scene that precedes the curtain call at a community theater production.

“Personal History of David Copperfield” takes a micro rather than macro approach to a classic.

This brings up what is both right and wrong about this particular “Personal History of David Copperfield,” which takes a micro rather than macro approach to a classic. Individual scenes are treated with detailed care, with an obsessive attention to minutiae, while any acknowledgement of the novel’s pageantry is swept under the 19th-century carpeting. In a nutshell, it feels like a stage version with really sophisticated special effects. (It is worth noting that one of those effects portrays David as dyslexic, with letters swirling on the pages he reads. Dickens is credited with one of the earliest descriptions of the ailment before it was medically defined, albeit in Bleak House rather than Copperfield.)

‘The Death of Stalin’: Laughing in the face of evil
John Anderson

HBO’s ‘Veep’ bows out in character, after years of watching reality catch up to it
Brandon Sanchez

Amid the Dickensian moralizing of the story and stories themselves, Iannucci tosses one conundrum directly at his audience. No will fail to notice that David Copperfield, one of the more celebrated figures in English literature, is played by Dev Patel, an actor of Indian descent. What one might not discern from the advertising is that all the casting is color blind—Steerforth, for instance, is played by a Welsh actor while his mother’s portrayer is Nigerian (Nikki Amuka-Bird). Wickfield is Asian; his daughter, Agnes, is black. Swinton is Scottish—and so is Capaldi and Iannucci.

It may be that, in addition to challenging the less-flexible viewer about his or her expectations about who should play whom, the director is casting as his most loveable characters natives of places once oppressed by British colonial rule. But, as I said, there is always a risk of overthinking things.