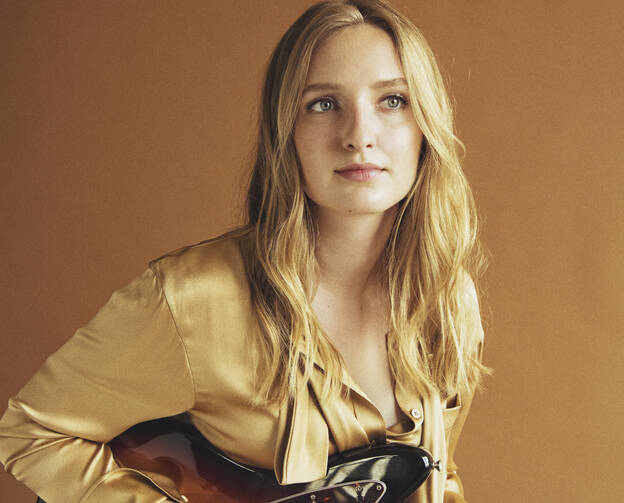 Music is a spiritual practice in itself, quite apart from its maker’s religious affiliation or profile. As a fan, student and player, I can find transcendence in bossa nova chord progressions, throbbing shoegaze guitars, girl-group harmonies, sweeping film scores. I hear David Bowie’s “Sound and Vision” as a kind of prayer and Cannonball Adderley’s “Mercy, Mercy, Mercy” as a joyful/mournful meditation. (I have played both songs with a church band I lead in Brooklyn.)

So when I first heard Madison Cunningham, the stunning singer/songwriter whose album “Who Are You Now” was nominated for the 2020 Americana Grammy (she lost to blues legend Keb’ Mo’), I didn’t immediately key into her background—she grew up playing in a praise band at Calvary Chapel, an evangelical church in Orange County, Calif.—though that has since deepened my appreciation. What I heard instead were gorgeously constructed pop songs, driven by gritty but precise electric guitar lines and lit by an expressive, supple voice in the vein of Lucinda Williams or Fiona Apple.

The singer-songwriter is light years away from the praise music she grew up playing with her dad.

After many more listens—including her earlier record, “Authenticity,” and a few EPs, all of which I recommend without reservation—I clocked many other influences and affinities. The aching ballad “Like You Do,” for instance, has the off-kilter lilt of mid-period Radiohead, with her head voice lifting dreamily into the vicinity of Jeff Buckley’s angelic countertenor. Her harmonic sensibility has some of the neoclassical ambition of Rufus Wainwright or Andrew Bird, as well as the expansive, unclassifiable vocabulary of Joni Mitchell.

Mitchell, it turns out, is also a touchstone for Cunningham’s remarkably mature lyrics (she’s just 24), which refract complicated relationships through larger insights about the world, and vice versa. “I hope you find a weakness that you’re stronger than,” she throws down in “Plain Letters.” And in the bluesy rocker “Trouble Found Me,” she turns her own vulnerability back on someone who has taken advantage of her—“You give me the disease, now you’re selling me the cure”—and transforms a confession into wisdom: “My affections are too soft/ To put a spell on me isn’t hard/ Good intentions feed the wolves and sharks.”

Joni Mitchell is a touchstone for Cunningham’s remarkably mature lyrics.

In the witty “L.A. (Looking Alive),” a tunefully prickly provocation about her adopted city, she looks askance at a town where “there’s bound to be something to let you down,” and where folks “turn themselves blonde when they get that sick feeling they’re aging.” She concludes with a wise-beyond-her-years kiss-off to the business she is only just entering:

How quickly you forget that just anyone can fill your seat

Doesn’t it feel good to laugh at yourself

This places her only about an hour north of Orange County, but seemingly light years away from the praise music she grew up playing there with her dad, Scott Cunningham, who is still the director of worship ministry at Calvary Chapel. In a recent interview he told me that Madi, as he calls her, was always musically precocious, harmonizing with the radio and picking up his guitar at a young age, and that when she turned to writing songs for his eponymous band, “She didn’t even really know what she was doing in terms of theory, but she was changing keys from the verse to the chorus. Her ear was always real strong.”

Times have changed in the Christian music world, Mr. Cunningham said. Thirty years ago there was a thriving contemporary Christian music scene offering young people the equivalent of knock-off brands—clean, Christ-centered versions of the pop and rock music their parents wanted them to avoid, and offering musical artists a variety of approaches outside of straight-up church praise songs. But that ’80s/’90s bubble has burst. There really isn’t a place now in the Christian music business, he said, for singer/songwriters who want to write introspective, let alone secular music—the kind his daughter had increasingly begun to write. Christian bands like Switchfoot and Twenty One Pilots are on major labels now, and their audiences reach well beyond the faithful.

Cunningham constructs gorgeous pop songs in the vein of Lucinda Williams or Fiona Apple. And she is just 24.

Scott said he could see clearly where his daughter’s outsized talents would lead her and that church music wouldn’t be able to contain her. This places her in a lineage with the likes of Aretha Franklin or Al Green, who crossed over from gospel to pop without ever leaving their roots behind entirely.

Another crossover artist may be even closer to home. In the 1980s, Leslie Phillips was a big-haired, Southern California-based pop star on the rise on the Christian music scene. But, feeling constrained by that scene and its politics, she changed her name to Sam Phillips, followed her guitar-based singer/songwriter muse and never looked back.

I can’t be sure that Madison Cunningham knows or feels connected to Phillips’s story. But among a series of brilliant cover versions she has posted online, in which she has tipped her hand to many of her influences (most of the aforementioned artists but also Tom Waits, Simon & Garfunkel, Gillian Welch, Brian Wilson and more), I took special notice of her cover of Phillips’s sad, sweet “Sister Rosetta Goes Before Us.” The song, made famous on the Allison Krauss and Robert Plant album “Raising Sand,” is itself a tribute to the gospel/rock pioneer Sister Rosetta Tharpe, and a statement of heartbroken faith (“Looking for the lamb that’s hidden in the cross/ The finder’s lost”).

Intentionally or not, it places Cunningham in a tradition I recognize. Like her and so many others, I was raised in faith and still practice it, heartbreak and doubt notwithstanding, and music has been a chief lifeline. She could be talking about my own life and faith when she concludes the breathtakingly panoramic memoir “Song in My Head” with a statement as resigned as it is resolute: “It’s a voice that I can’t refuse/ Maybe I don’t have a right to choose when it calls my name.”