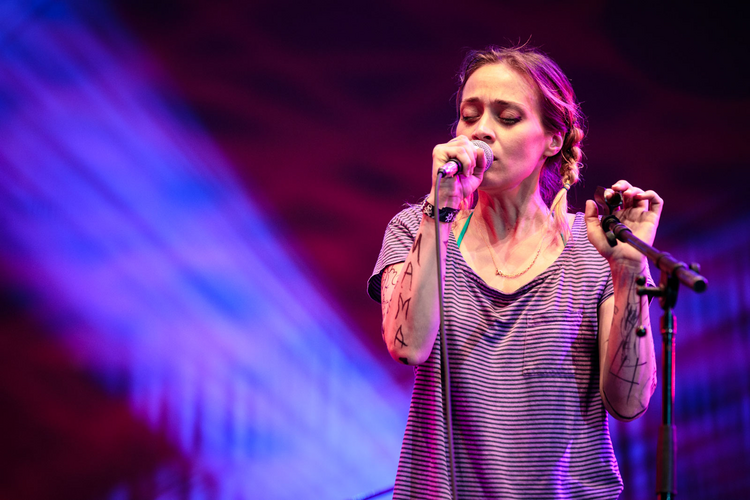 In pop music history the 1990s may be best known for the ascendance of grunge and hip-hop. But it was also an unlikely boom time for piano-based singer/songwriters: Tori Amos, Rufus Wainwright, Ben Folds, Sarah MacLachlan. High in these ranks was Fiona Apple, whose debut album, “Tidal,” kicked off not with piano but with a clatter of percussion and a spoken-sung taunt: “I tell you how I feel, but you don’t care.”

Her stunning new record, “Fetch the Bolt Cutters,” also begins with percussion and a confessional, first-person lyric, delivered with the incantatory intensity that is one of Apple’s signatures: “I’ve waited many years/ Every print I left upon the track/ Has led me here.” As ever, she seizes—demands—full attention from the jump, like a performer commanding a stage. And for 52 minutes and 13 tracks, she never leaves it. To a degree unmatched by her previous four albums, “Fetch the Bolt Cutters” feels like a sustained performance, dense with emotion and observation, filigreed with crafty detail.

“Fetch the Bolt Cutters” feels like a sustained performance, dense with emotion and observation.

It also never quite relaxes from that tense, coiled, rackety head space. If Apple’s music has never been exactly easy to put on in the background—as with Broadway cast albums or a lot of hip-hop, I find I need to listen closely to fully enjoy it—it amply rewards the trouble. And now that we’re all in an indefinite pandemic lockdown, all-or-nothing music like this may have arrived at precisely the right moment.

Apple has never shied from sonic or formal ambition before, but here she has broken her songcraft down to its molecular level. Many of the songs here sound like schoolyard chants or nursery rhymes that have grown into homemade chorales, like the devilishly catchy “Relay,” which contains this uncomfortable pearl of insight: “Evil is a relay sport/ Where the one who’s burnt turns to pass the torch.” Though we hear some of her distinctively chiming or churning piano figures, “Fetch” is dominated, almost to a fault, by percussion and vocals.

Apple has never shied from sonic or formal ambition before, but here she has broken her songcraft down to its molecular level.

What comes across, as ever but more than ever, is Apple’s unbiddable individuality—the kind that often gets dismissively coded in women as “feisty” (or worse), but which is usually admired in men as principled stubbornness, an inability to suffer fools. When she defiantly intones, in “Under the Table,” “Kick me under the table all you want/ I won’t shut up,” she is both conjuring a recognizable dinner-party awkwardness and laying down a marker, a line she won’t cross—and that we had better not either. Lest this all sound impossibly earnest, she also utters a priceless line that could have been written by Mae West: “Cookie, don’t push me.”

Elsewhere her lyrics reach beyond her usual frankness to new levels of concision and narrative bite. The traffic-stopping “For Her” is in many ways the album’s showpiece; in a Broadway musical it would be the 11 o’clock number. Using a swarm of sing-songy multitracked vocals, Apple outlines the perfidy of a Weinstein-like Hollywood rake who has been “treating his wife like less than a guest” and who is known for “never showing weakness unless it’s awards season.” Then she unnervingly shifts gears from third-person sympathy for his other victims to a blistering confrontation over her own assault. It’s a #MeToo testimony with a vengeance, and it is as bracing, enraging and sad as it sounds.

R.I.P. John Prine, oracle of the broken and the beautiful
James T. Keane

Apple has earned just comparisons to Joni Mitchell or Nina Simone, female geniuses as abundant in craft as in personal drama. A better analogy may be to Tom Waits, whose early work groomed him for the role of latter-day Tin Pan Alley songsmith, much as Fiona’s earlier pianistic tunes, often orchestrated by outside hands, seemed to call back lovingly to earlier eras.

But one day, Waits (encouraged by his wife and co-writer, Kathleen Brennan) made a breakthrough to his signature sound, detuning his piano, banging on brake drums and raving like a demented carnival barker. Apple has found her own way to a similar atavistic essentialism: to music as ritual, possibly even of the healing kind. There are worse ways to spend a quarantine than to sing along with her: “I need to run up that hill/ I will, I will, I will, I will, I will.”