Dante is remembered most for his depiction of hell. This sculptor wants us to remember heaven, too. 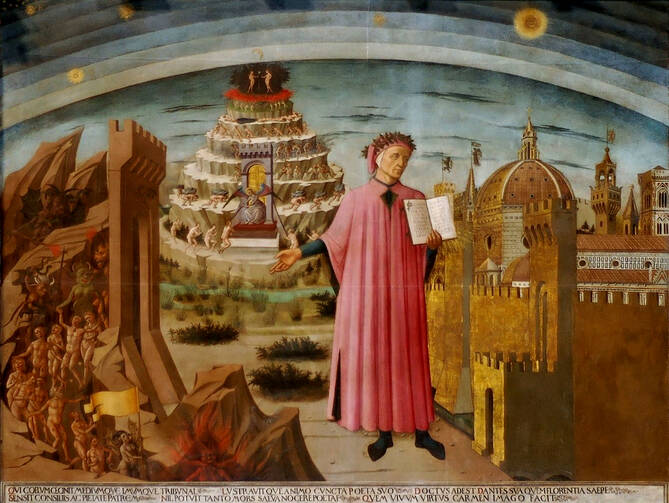 VATICAN CITY (RNS) — In preparation for the 700 anniversary of the death of medieval poet Dante Alighieri, a Canadian artist is creating a sculptural tribute to his “Divine Comedy” that would be the first sculptural rendition of the entire poem.

“In our culture Dante is becoming lost,” said sculptor Timothy Schmalz in an interview with Religion News Service on Monday (July 20).

Not only is Dante less and less required reading, Schmalz said, but his “Divine Comedy” is often misrepresented by putting the focus only on the first part — the descriptions of hell and its fiery punishments.

The Italian poet captivated generations by telling his imaginary journey through hell, purgatory and heaven. His use of popular Italian dialect in his writing, instead of the more high-brow Latin, earned him a title as the “Father of the Italian Language.”

“Dante is often presented in a very secular way,” Schmalz said, noting the obsession that universities, artists and writers have had with the Inferno, ignoring the rest of poem.

According to Schmalz, limiting the poem’s scope to the Inferno means “not giving the proper representation of Dante and also the Christian ideas that are in the ‘Divine Comedy.’

“As a Catholic sculptor I have been very angry about this for many years,” he said.

An example of the fascination Dante’s Inferno has had on artists throughout history is the famous “Thinker” by the French sculptor Auguste Rodin. The popular image was originally meant to portray Dante as the “Poet,” and a miniature version of it can be found atop Rodin’s massive representation of “The Gates of Hell.”

“Because I am a Christian sculptor I will right this wrong,” Schmalz said. “I will do what has never been done before in the history of sculpture, which is to create a sculpture for each canto of the ‘Divine Comedy.’”

There are 100 cantos in the poem, which have previously been represented in etchings and drawings by the likes of Sandro Botticelli, Gustave Doré and William Blake, but Schmalz would be the first to represent the full poem through sculpture.

“I realized why it hasn’t been done before,” he said. “It’s so much work.”

The “Divine Comedy” sculptures are not the first time the Canadian artist has undertaken a project of intimidating scope.

“That gave me courage to work on 100 cantos,” he said, adding that the COVID-19 pandemic has given him the time to create the artwork while “locked away” in his studio.

Schmalz notes the similarity to Dante, who wrote the “Divine Comedy” while in exile from his native city of Florence.

“I am sculpting it while all the world is in social isolations, in a sense, in exile,” Schmalz said. “I often wonder that if Dante never was in exile, the ‘Divine Comedy’ — one of the greatest works of Christian literature – would never have existed.”

The work is expected to be completed by March 2021 and there is no fixed venue for the exhibit, though it will likely be in Italy.

Shmalz has a vision for the project that he describes as an “open air book” — a garden where the bronze sculptures, styled to look like pages, will lead the viewer through Dante’s masterpiece, as they “read the poem with their eyes and turn the pages with their feet,” from the burning torments of hell to the celestial imagery of heaven.

The artist said he believes such an artwork could serve as a “visual ambassador” that will rekindle interest in the Italian poet 700 years after his death.

Review: To hell and back
Nick Ripatrazone

“It was an epic poem and it demands an epic representation,” Schmalz said, adding that he hopes the statues will keep the artist alive and relevant 300 years into the future.