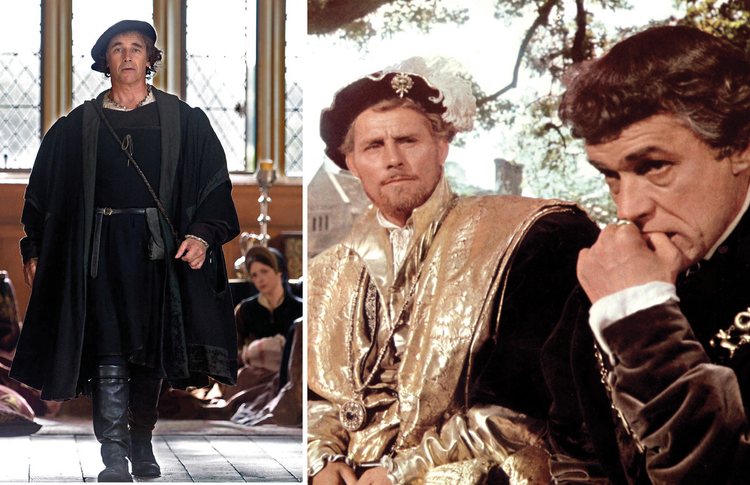 Mark Rylance, far left, played Thomas Cromwell in the BBC production of “Wolf Hall” (2015). Paul Scofield, near left, won an Oscar for his portrayal of St.

How could Mantel, who won Booker Prizes for both Wolf Hall and its sequel, Bring Up the Bodies, manage to weave so seductive and poetic a spell out of 500-year-old shards of court records, gossip, Tudor-era chronicles and scandals, royal intrigue, sex, love, sinners—and at least one saint? Partly through a quasi-stream-of-consciousness technique that puts us inside the head of the historically problematic Cromwell, who at the end of the third book has become Lord Privy Seal to King Henry VIII and ultimately loses his head. Partly, it was through that old gambit of making the ancient feel contemporary. And partly by casting against type—at least according to any Catholic tradition.

Mantel’s portrait of More is of a self-serving whiner with a death wish. But what must always be remembered is that she is creating fiction.

According to the Mantel take on history, one of Cromwell’s more loathsome nemeses is Thomas More, a saint of the Catholic Church (he was canonized relatively recently, in 1935, by Pope Pius XI, as a martyr) and one of the premier statesmen of his age. High school graduates of a certain vintage will know him best for Utopia, a word of his own coinage and the title of his 1516 fiction about an imaginary and ideal society. A defender of the pope, he was a nuisance to Henry Tudor, opposing his divorce from the first of his six wives, Catherine of Aragon, and refusing to recognize Henry as head of the Church of England—refusing, for that matter, to recognize the Church of England. He was anti-Luther, anti-Calvin and anti-Tyndale (as in William, translator of the Bible into English, although sometimes “heretical” English). He was also, according to Mantel, a torturer of Catholic apostates.

One of Cromwell’s plaints against More, whom he dislikes on a very basic level, regards what he views as his opponent’s hypocrisy: Within the realm that Mantel portrays, mere torture—never mind burnings, beheadings and hangings of various kinds—was a commonplace, to use the contemporary parlance. “He’s bent more than his share over a wheel,” Cromwell says of More, who is dispatched in 1535 at the end of Wolf Hall but never really goes away.

One of Cromwell’s plaints against More, whom he dislikes on a very basic level, regards what he views as his opponent’s hypocrisy.

St. Thomas More himself denied using torture, or even corporal punishment, save on a couple of occasions—so the subject must have come up. The Tudor historian John Guy has said that Mantel relied heavily on the accounts by the chronicler John Foxe, who “loathed More,” according to Guy, implying that as an Elizabethan, Foxe was more interested in Protestant propaganda than in enhancing More’s legacy.

Historical accounts aside, though, what must always be remembered is that Mantel is creating fiction. Novels. Her portrait of More (as opposed to the one we know by Hans Holbein, with its determined, clear-eyed, hawk-like visage) is of a self-serving whiner with a death wish. But, of course, this depiction is inside the head of Cromwell, whom Mantel intends as her hero and who carries several stones in his heart.

One of those rocks is Thomas Wolsey, Cromwell’s mentor, the onetime primate of England and papal legate. Wolsey was made a cardinal in 1515 by Pope Leo X but could not secure an annulment for Henry VIII from Leo’s successor, Pope Clement VII, who declared Henry’s subsequent marriage to Anne Boleyn invalid, thus setting in motion the English Reformation. It also sealed the fate of Cardinal Wolsey (who died en route to London from his archbishopric in York to answer charges of treason, a customary prelude to Henry’s cutting off one’s head). Thomas More was Wolsey’s successor as lord chancellor of England, which was, in and of itself, enough to cultivate enmity in Cromwell. (Again, I am addressing here the fictional Cromwell; in his own portrait by Holbein, the genuine article looks like he is suffering an acute intestinal ailment.)

Despite being a monumental figure in English history, Cromwell also represents something very American.

But there are other reasons for their adversarial relationship, one being temperament. Cromwell, often to an admirably consistent degree, was an utter pragmatist. More, of course, went to his death in defense of the Catholic Church and what he believed to be God’s will.

On a purely earthly level, there are two overarching reasons why Cromwell is a hero and More not, at least according to the chemistry in the Mantel books. One we will get to in a moment, but the other is this: People are perverse. They reflexively mistrust history, never mind news, sometimes because what they have been led to believe turns out not to be true but also because a revisionist take on almost anything pretends to be the secret history we have not been told and as such will inevitably find an audience. (See: vaccines, almost everything about food and the theory that Shakespeare didn’t write the plays).

And despite their relative obscurity—among even a literate population that might never have read Utopia and gets its Tudor history from the entertaining Lucy Worsley via the BBC—both Cromwell and More have a public persona, thanks to movies and television. (These personas, dangerously, become the defining portrayal of almost anyone in any field. Think of Pope Julius II, and you think of Rex Harrison. It’s inevitable).

The story of More’s showdown with Henry was the basis for “A Man for All Seasons,” the play by Robert Bolt that premiered in 1960 on London’s West End with Paul Scofield as More. Scofield would go on to reprise the role on Broadway and in the Fred Zinneman film, winning the Best Actor Oscar for a movie that won a Best Picture award in 1966. Scofield—handsome, yes, but also possessed of an elevated dignity and an innate eloquence that befit the role, and the cause—defined More for generations of film lovers. Leo McKern, decidedly more earthy, did something quite different for the image of Cromwell.

Cromwell was a persecutor of Catholics, a champion of the Reformation and the chief accomplice to the homicidal maniac that was Henry VIII.

But Cromwell got his shot, as Lin-Manuel Miranda might say. The charismatic Mark Rylance, one of the better actors around, played Cromwell in the “Wolf Hall” shown in the United States on PBS’s “Masterpiece” (which was actually an adaptation of the first two Cromwell books) and made him as fatalistic and romantic a figure as he was in the novels. Rylance, as is his wont, provided a window on Cromwell’s interior life and portrayed him as a hero despite himself. Cromwell was, after all, a persecutor of Catholics, a champion of the Reformation and not just an apologist for but the chief accomplice to the homicidal maniac that was Henry VIII.

Which brings us to the other reason Cromwell works a la Mantel. And it has to do with our times versus that of the Tudors—or even a Paul Scofield. The events of recent years have made us a more egalitarian society, philosophically if not practically, and Mantel’s Cromwell is the model of the self-made man. The son of a brutal, abusive blacksmith, Cromwell scrapped and schemed his way up the rickety ladder of success in a barely post-medieval world; he knows the law as well as anyone.

A Man in Full: ‘Wolf Hall’ and the emergence of Thomas Cromwell
Maurice Timothy Reidy

Though he is of low birth, he becomes the second most powerful figure in the monarchy and is therefore loathed by the nobles around him, not just because he is their better but because he is an affront to their presumed superiority-by-birth. He keeps both a literal and figurative knife in his shirt that is ready to cut where it needs to in order to keep Thomas Cromwell in his place of privilege—not the place to which he was born but which he has earned through intelligence, guile and ruthlessness.

Because the reader is inside Cromwell’s head, the reader knows the depths of his love for his family and his faithful allies, and for the motivations that sometimes lead him to charitable acts that gain him nothing. But he is a fearsome creature, and despite being a monumental figure in English history, he also represents something very American. If readers prefer Cromwell to More, it is not just because of Mantel’s verbal magic. It is because she has tapped into their inner small-d democrat.