A Man in Full: ‘Wolf Hall’ and the emergence of Thomas Cromwell 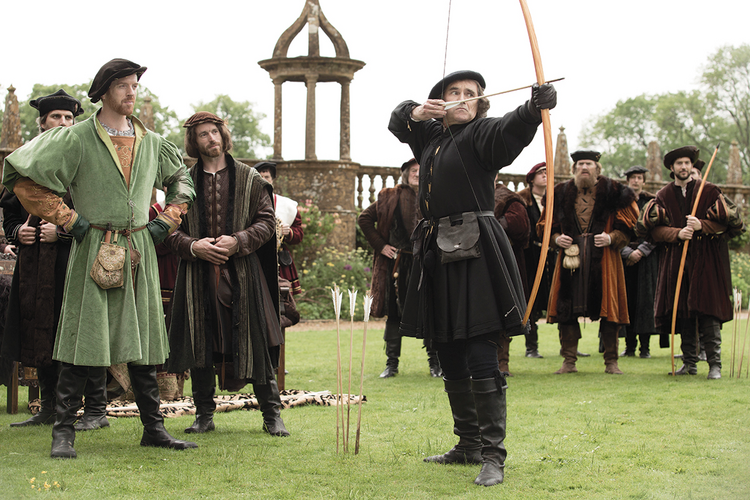 Thomas Cromwell may have been a conniving, loathsome character in Robert Bolt’s “A Man for All Seasons,” but the advisor to King Henry VIII was granted redemption by Hilary Mantel in her novels Wolf Hall and Bringing Up the Bodies. (A third novel, The Mirror and the Light, is in the works.) Cromwell is the unlikely hero of these stories, his famous Hans Holbein portrait fully brought to life. Now Cromwell has received perhaps the greatest honor a British historical figure can be granted: a starring role in a Masterpiece drama. In a rare cultural coincidence, a stage version is also now playing in New York.

Imported from England on the heels of the sixth season of “Downton Abbey,” Wolf Hall (starting in April on PBS) is a six-part study of the mysterious and brilliant Cromwell, played here by the equally brilliant Mark Rylance. That Cromwell’s elevation comes largely at the expense of Sir Thomas More is no small matter. More (Anton Lesser) is portrayed here as a pious and slippery fellow, a sign perhaps of Mantel’s own distaste for the church and her saints. (For a more accurate take on More, see Eamon Duffy’s review of “Wolf Hall” in The Tablet, Jan. 29.) But it is hard not to be won over by “Wolf Hall,” especially with the cast on hand. Jonathan Pryce as Cardinal Wolsey! Sargent Brody as Henry VIII! If you are looking to banish Showtime’s “The Tudors” from your pop-historical memory, here is your chance.

Cromwell is a man of few words, but his words are sharp and well chosen. He is the son of a blacksmith, a fact routinely noted by his detractors, but he has studied to become a lawyer and makes his way into the employ of Cardinal Wolsey. He is fiercely loyal to Wolsey even when others abandon him. (The story is familiar: Henry wants to annul his marriage, but Wolsey can’t obtain the proper approval from Rome.) Yet Cromwell is not a martyr either. He stays true to the cardinal up until the very moment a more powerful patron seeks his services.

In Mantel’s books Cromwell possesses a charisma that would seem difficult to translate on screen. He is a whirlwind of activity but not a man who woos women or makes great speeches. As played by Rylance, however, you can see why young students want to study with him and live on his estate. Cromwell is an unusually successful businessman, someone who gets things done. He walks with purpose, and even the way he writes a letter seems imbued with strength and meaning. He does not seem scared of anything.

“Wolf Hall” is, in many ways, an apology for the burgeoning English state. Where else but England could the son of a blacksmith become an advisor to the king? Not France surely, where Henry complains that the king can tax his subjects to kingdom come. (Well, at least until 1789.) King Henry must go through Parliament to fund his wars. But the democratic impulse that Parliament represents, faint though it may be, is what allows a man like Cromwell to flourish. As one character remarks over drinks by the fire, evaluating the prospect of a Queen Anne Boleyn, “A world where Anne can be queen is a world where Cromwell can be....”

The series also suggests that England was correct to part ways with Rome. In a private conversation with the king, Cromwell offers a damning indictment of monastic life. The monks raise money for the poor and then spend it on themselves, and force their would-be students to serve as their staff. His words, of course, are exactly what the young king wants to hear. Dissolution looms.

These religious controversies emerge from natural human drama. When Cromwell receives a package in the mail, his wife eyes him warily as he opens up a Bible. It is William Tyndale’s English translation of Scripture, a document that, if found in Cromwell’s possession, could lead to imprisonment or worse. Mantel cannot resist a dig at Rome: “Read it and see how you’re misled. No mention of nuns, monks, relics. No mention of popes,” Cromwell says. But he is also a careful man, and when he meets with Thomas More for dinner, he does not admit to reading Tyndale. When he hears, at one point, that Tyndale is in Hamburg, he does not want to acknowledge it, knowing that he is a fugitive. Cromwell is torn between the demands of the state and his own conscience. “Wolf Hall” is in part the story of his own carefully calibrated attempts to reconcile those two impulses.

It is difficult not to contrast “Wolf Hall” with “A Man for All Seasons.” They are almost diametrically opposed takes on the same historical events. But what unites them is a love for language. In the film Paul Scoffield’s Thomas More was granted line after line of smoothly polished dialogue. He may not have often seemed very human, but boy, was he eloquent. (“Why Richard, it profits a man nothing to give his soul for the whole world...but for Wales?”) Cromwell shares a flare for bons mots. “Are her teeth good?” Cromwell’s maid asks after he visits with Anne Boleyn. “When she sinks her teeth into me I’ll let you know,” Cromwell snaps. When one of Wolsey’s aides prays to God for justice for the wronged cardinal, Cromwell answers, “No need to trouble God. I’ll take it in hand.”

What form justice will take is unclear at the end of the first two installments of “Wolf Hall.” (The final four were not made available to the press.) Aside from historical intrigue, “Wolf Hall” offers something else worth contemplating. In one of the book’s most telling bits of dialogue, replayed here, the Duke of Norfolk complains, “Cromwell, why are you such a person?” The actor, Bernard Hill, spits out that last word in disgust. “It is not as if you can afford to be,” he says. “Wolf Hall” is at its heart the celebration of a single individual. You may not always agree with Thomas Cromwell, but it is impossible to deny his right to exist.

Maurice Timothy Reidy is an executive editor of America.

@mtreidy
Show Comments (
2
)
Comments are automatically closed two weeks after an article's initial publication. See our comments policy for more.
Bill Mazzella
6 years 1 month ago
It is only in our times that the hierarchy has become free of the dictates of the State. (Except in China and a few other places.) John XXIII mentioned this in his opening speech to the Council, indicating that that freedom should help the prelates do things more in service to others. More, Cromwell and Wolsey still dominate the scene. Henry does not have the aura that each of them has. Unless one finds stupidity and grossness charming. More is not the angel many Catholics think he is. Nor is Cromwell the hero many of the separated brethren think he is.Wosley is praised by no one. How fortunate are we to live in freer times. Except for those in many Eastern countries. Pope Francis through us a curve with his actions in Chile which he has to deal with at some time. Otherwise, he exemplifies the freedom of the Children of God and knows that our mark is in service to others not beheading people. The problem with More and with others, even today, is the edict of a pope is more important than the edict of the gospel. Our freedom does not mean that we do not have interesting people as in Cromwell's time. It is just that they are able to operate in a better climate.
Nicholas Clifford
6 years ago
Fascinating review of Wolf Hall, the latest in those engaging costume dramas from the BBC that we have come to know and love. I haven’t watched them yet (they’re on my DVR), but I’ve been through both of Mantel’s Cromwell books and look forward to the third (even though I know the ending). I’m a historian, though not of Tudor England (about 6000 miles away in fact). And I see from the press that some eminent historians of the period are sharpening their knives against Mantel and her views of history (though I hope she may not meet the end of Anne Boleyn, or indeed of Cromwell himself). But three points are worth remembering. First, she is not a historian (any more than was Tolstoy when he wrote War and Peace). She is a novelist -- and a very good one indeed -- and novelists play by different rules from us historians. Second, even if we dismiss the questions of historical accuracy, and stay in the realm of the literary, we must remember that everything is seen through the eyes of Thomas Cromwell -- not through the eyes of his underlings, or Thomas More, or Henry VIII or Wolsey or anyone else. What particular axes does Cromwell have to grind as he tells us his story? Is he, as the literary folk say, a reliable narrator? Or must we read him using that favorite phrase of the lit crits, the hermeneutics of suspicion? And third, in real life it is of course not Cromwell himself giving us the story, but Mantel through Cromwell. And is she herself a reliable narrator? Or is she playing tricks on us, her readers? I know many readers of historical novels regard historians as spoilsports, always coming in and saying, “But it wasn’t that way at all, and here’s why. . . .” And I know most of us don’t depend on Shakespeare to give us historically accurate portraits of Henry IV, Henry V, poor old Richard III, or even Antony and Cleopatra. But none of us (I hope) use that to denigrate Shakespeare. Or Tolstoy, or Mantel for that matter. Still, films and novels are usually easier to absorb than the historian’s history (look at the recent flap over whether LBJ was mistreated in “Selma”). And that’s one of the reasons we keep our antennae up and look for trouble. The hermeneutics of suspicion, indeed. Just plain common sense, in fact.