‘Flannery’ profiles one of literature’s miracles 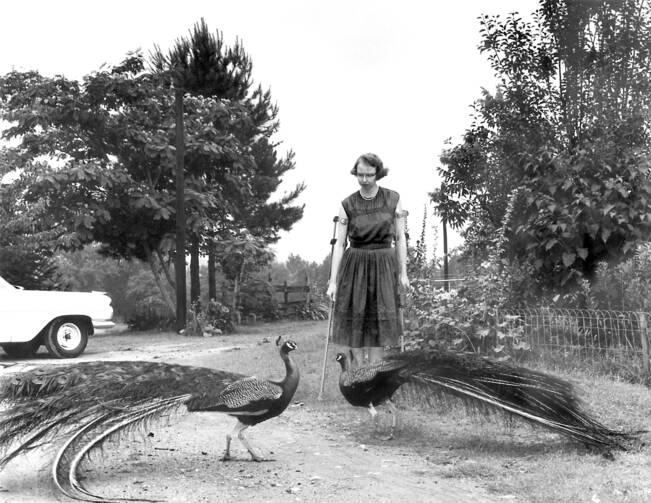 In his introduction to The Complete Stories of Flannery O’Connor (1971), the editor and publisher Robert Giroux recalls the long-distance mutual-admiration society between O’Connor and his old friend and writer Thomas Merton, who found in O’Connor’s southern gothic, freak-populated, frequently poker-faced prose the presence of God, and the story of Man.

“When Flannery died,” Giroux wrote, “Merton was not exaggerating his estimate of her worth when he said he would not compare her with such good writers as Hemingway, Porter and Sartre but rather with ‘someone like Sophocles…. I write her name with honor, for all the truth and all the craft with which she shows man’s fall and his dishonor.’”

“Flannery” is an apologia for O’Connor but, like any good defense, it takes the position that she doesn’t need one.

O’Connor is as well-remembered as a Catholic writer as a Southern one, and both aspects of her literary personality are explored in “Flannery,” a new documentary written, produced and directed by Elizabeth Coffman and Mark Bosco, S.J. It is certainly a treat for fans of O’Connor, who died of lupus at the age of 39 in 1964. Since then, her work has suffered dismissal and banishment by the overly woke. When even the title of one of your stories (“The Artificial Nigger”) is enough to start a protest march, you become problematic, never mind that the sentiment inside those stories is as cognizant of Southern sin as Faulkner’s, and its treatment as tart as Twain’s. Academia is the ventilator of literature. Without it, it gasps.

But O’Connor has never been easy, and she was not easy on her readers or herself, something the film acknowledges. In the preface to the second edition of her novel Wise Blood, she wrote that the book was “a comic novel about a Christian malgré lui” (“despite himself”), and said it had been written by “an author congenitally innocent of theory, but one with certain preoccupations. That belief in Christ is to some a matter of life and death has been a stumbling block for readers who would prefer to think it a matter of no great consequence.”

O’Connor has never been easy, and she was not easy on her readers or herself.

It was of great consequence to Flannery O’Connor, a critical element in her writing and is an essential ingredient in this film.

Many documentaries don’t need to be—meaning, they don’t need to be documentaries. Often, their DNA is journalistic; and they would more naturally exist as magazine articles or even as books. The pictures are ornamentation and/or an excuse to make an issue into a film and get it in front of more people. But other stories are broadened, deepened and elevated by the evocation of time, place and atmosphere that only archival photos and personal artifacts can provide. “Flannery” is one of them—Coffman and Bosco show from the outset that they know how to use a room, or a hat, or any offhand detail to summon up an entire psychology. Much like a Flannery O’Connor short story.

She was a creature, in many ways, of her time and place, and evidence of that runs through her letters and quoted remarks.

That said, it would put a prospective “Flannery” audience at an advantage to have some knowledge of O’Connor’s work. This includes the two novels, the 1952 Wise Blood (made into a film by John Huston) and The Violent Bear It Away (1960). But more important. the 32 short stories, which bear titles that might be more familiar than the tales themselves—“A Good Man Is Hard to Find,” “Everything Rises Must Converge” and “The Life You Save Might Be Your Own” among them. “The Displaced Person,” though written in 1955, should be required reading for all Americans right now. It not only lacerates a persistent American know-nothing, anti-immigrant, racist worldview, but also tracks it to its source, which is ignorance.

“Flannery” is an apologia for O’Connor but, like any good defense, it takes the position that she doesn’t need one. She was a creature, in many ways, of her time and place, Milledgeville, Ga., and evidence of that runs through her letters and quoted remarks (though not, I would say, her work, which records, without endorsing, Southern racism). The writer famously declined to meet James Baldwin when the latter was visiting Georgia in 1959, but Hilton Als, the New Yorker writer and a specialist on culture and race, offers a valid explanation: Such a meeting would have been sensational, a political and racial event that would ruin her ability to exist as she had been doing, not only as an observer of her small, prismatic community but as a member of it. She did not say she could never meet Baldwin. She just couldn’t do it in Georgia.

Narrated by Mary Steenburgen, “Flannery” features interviews with Als, the poet-essayist Mary Karr, Alice Walker, Tommy Lee Jones, Conan O’Brien and, perhaps most enlightening, the now-late Sally Fitzgerald (the editor and widow of another close O’Connor friend, the poet and translator Robert Fitzgerald). The documentary places its subject, partly by describing her spiritual practices, prayer book and worldview, among the great Catholic writers, a list that would range from Merton to J. R. R. Tolkien, from Graham Greene to J. F. Powers to Muriel Spark.

Where are the Catholic writers now? And is a Flannery O’Connor possible now? This is not something “Flannery” gets into; one wishes it had. In an article in 2011 for the art website The Millions, the cultural critic Robert Fay posited that it was changes in the Mass that changed the landscape of Catholic writing, removing the mystery and ritual that had inspired even such unlikely examples as James Joyce. It would have led “Flannery” down a path of no return, of course, and contradicted what seems the point of the film, which is that O’Connor was, for all her influences and intentions and hardships and isolation, one of literature’s miracles.

“Flannery” is being shown on demand by Film Forum.