Netflix’s ‘Gentefied’ is the best American TV show about gentrification 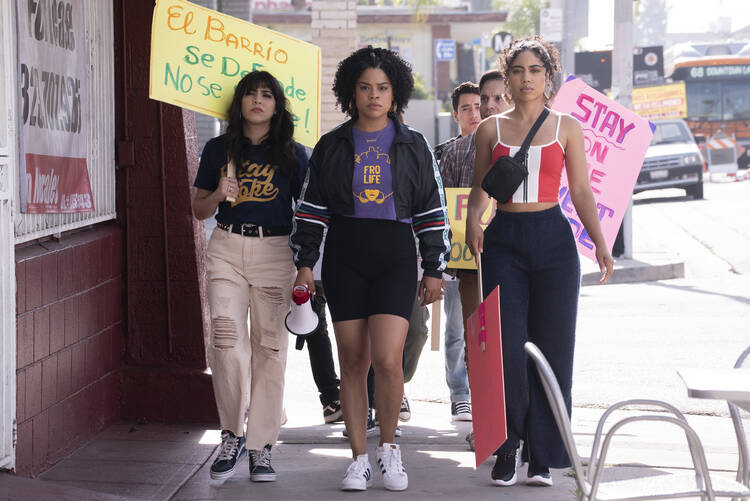 “Gentefied,” another addition to Netflix’s ever expanding TV-for-bingeing menu, covers a lot of ground. Let’s start with the name: “Gentefied” is a play on the English word gentrified and the Spanish word gente, meaning people. It’s a Spanglish word then, appropriate for a Spanglish show.

In interviews, the show’s (refreshingly diverse and still all-Latino) cast defined “Gentefication” as when a neighborhood is gentrified not by wealthy outsiders but by newly affluent members of the same community. Whether that makes the ensuing displacement better or worse is a question not easily answered. It certainly makes it more complicated. But this much is clear: “Gentefied” is the best American television show about the issue of gentrification, tackling an important issue with nuance and compassion.

“Gentefied” tackles an important issue with nuance and compassion.

Set in East L.A.’s iconic Boyle Heights neighborhood, where the 1968 Chicano walkouts began, “Gentefied” could be about any number of gentrifying neighborhoods across the country: Pilsen in Chicago, the Mission in San Francisco, Brooklyn in New York. First and foremost a comedy-drama, the show does what discussions of housing policy rarely achieve by humanizing the issue. “Gentefied” is laser-focused on its characters and the deeply personal choices before them. What the solution to the economic problems of gentrification might be, the arguments about rent control or zoning, are left unanswered. Instead we watch, with heartbreaking specificity, what rising rents and hipster outsiders do to longstanding communities from the perspective of the people who live there. This is the show’s own ideological statement: implicitly arguing for the importance of recognizing people, in all their imperfections, as the true protagonists of any economic trend.

The main people the show follows are the Morales cousins: three Mexican-American young adults, all pursuing very different dreams, while still doing their best to help their grandfather save his taco shop from rising rents. Their stories feel utterly real and the questions they confront are very relevant. Ana Morales, who dreams of being a professional artist, must grapple with how much to appeal to the tastes (and wallets) of richer, whiter consumers. Erik Morales is torn between his loyalty to family and his desire to start his own. And Chris Morales, an assistant chef at a fancy, expensive restaurant, will debate with his grandfather the most important of questions: What exactly constitutes a taco? (There is a lot of taco discussion in this show; it will make you crave some).

Beyond these plot lines, “Gentefied” shows us the realities of life in one of the richest cities in the richest country in the world. Restaurant owners threaten to call ICE to keep their immigrant workforce in check. Cash bail and a biased criminal justice system push entire families to the financial brink. In one particularly moving episode, we see a father and his son living together in their van, with equal attention given to the father desperately trying to make ends meet and the son’s struggle to confess his feelings to his crush, presented as an epic and hilarious mariachi telenovela.

My favorite part of “Gentefied” is its breakthrough in positive Latino representation. The show lets the country see us as we see ourselves. It is genuinely moving to see an actor previously known for playing a murderous cartel leader on “Narcos” now play a funny and compassionate neighborhood taquero, taking care of his small business and three grandchildren. At a time when Latinos have been stigmatized and brutalized by our politics, with our Americanness under question, this sort of positive, human representation could not be more welcome.

Similarly, the Covid-19 pandemic has made the issues of housing and racial inequalities all the more pressing. Millions of Americans have missed their rent payments since the pandemic began. Latinos have been disproportionately affected by both the disease itself and its economic fallout, with the latest job report showing Latinos have the highest unemployment rate in the United States. One can easily imagine the fictional Morales family being among those affected.

The show’s first season ends on a cliffhanger that leaves the Morales family and their restaurant in an existential crisis. (Netflix has confirmed a second season is in the works). Yet the events of the past few months may have made the situation faced by the real-life working families of East Los Angeles even more dire—and made the show more relevant than ever.