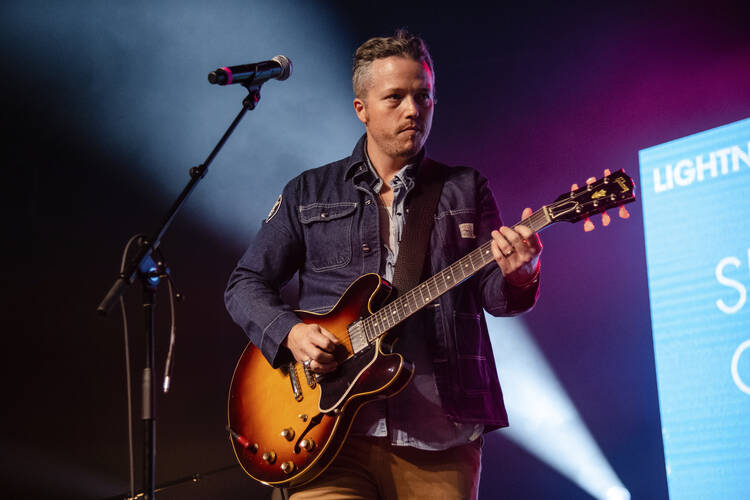 Jason Isbell performs at the To Nashville, With Love Benefit Concert at Marathon Music Works on Monday, March 9, 2020, in Nashville, TN. (Photo by Amy Harris/Invision/AP)

Something is going on in Jason Isbell’s music, and it requires our attention—our full attention.

Isbell, a singer-songwriter from northern Alabama who makes music at the intersection of country and rock, released his latest album, “Reunions,” on May 15. It’s the fourth studio album he has produced with his band, The 400 Unit, and this record—like nearly all of Isbell’s recent work—has something new to say to us, if we are willing to listen closely.

Like many artists, Isbell’s music and personal journey are intertwined. Now 41, he struggled both personally and professionally during his early career. In 2007, he was kicked out of his band, the Drive-By Truckers, and battled alcohol and drug abuse for many years. Things changed in 2012. He got sober and married singer-songwriter Amanda Shires, with whom he now has a 4-year-old daughter.

Something is going on in Jason Isbell’s music, and it requires our attention—our full attention.

Isbell’s 2013 solo album “Southeastern,” which he finished on his wedding day, chronicles past brokenness with breathtakingly poignant lyrics. In “Live Oak,” a haunting track from the collection, the main character’s troubled past is so intensely present that it takes a physical form:

But Isbell punctuates his recognition of past sins with notes of hope throughout the album. “I sobered up/ and I swore off that stuff/ forever this time,” he sings in the beautiful lead-off track, “Cover Me Up.” That line still draws cheers from fans at Isbell’s shows, as he approaches a decade’s worth of sobriety.

Since “Southeastern,” Isbell has released a Grammy-winning solo album (“Something More Than Free” in 2015) and two albums with his band, The 400 Unit: another Grammy winner in “The Nashville Sound” (2017) and now “Reunions,” adding up to four stellar albums in an eight-year span.

“Reunions,” especially compared to “Southeastern,” is less of an open window into Isbell’s personal life (though there are exceptions, like “It Gets Easier,” a rocking tune about the daily struggles of sobriety). But the songwriting does not suffer from this transition. As he recently said in an interview with The New York Times, he has slowly been trying to remove himself from his work, though it is certainly difficult. “It’s what separates pros from beginners,” he said. “Can you write about something other than yourself and not be vague, broad and clichéd?”

“Reunions,” especially compared to “Southeastern,” is less of an open window into Isbell’s personal life. But the songwriting does not suffer from this transition.

Well, Isbell can, and he shows off his skill in “Reunions.” The second track on the album, “Dreamsicle,” could almost read as a short story—about the scars that a troubled adolescence can leave behind, even if the effects are not recognized until years later. “Only Children,” my favorite track of the 10-song album, is perhaps Isbell’s best writing on “Reunions.” It details a childhood friendship from the point of view of a narrator who now understands the beautiful naivete of the whole thing. And then in the song’s bridge, we learn that the narrator’s companion has died:

“Heaven’s wasted on the dead.”
That’s what your mama said
While the hearse was idling in the parking lot

These three lines are a perfect illustration of Isbell’s lyrical gift. He starts with a curious sentiment, one that almost strikes you as funny. But he doesn’t leave it floating in the air; he brings it into a setting so crystal clear that you can practically smell fumes coming from the funeral car’s tailpipe.

“Only Children” does have an autobiographical element, as the song was inspired by a childhood companion of Isbell’s who died several years ago. But the universality for which Isbell is striving also comes through. Who can’t resonate with that funeral scene? “Reunions” is chock full of these lyrical gems.

But his music is not only important because of what it says. It also invites us to reevaluate how we listen.

Isbell's music is not only important because of what it says. It also invites us to reevaluate how we listen.

Isbell’s music dares us to practice intentional, engaged listening precisely because that is what Isbell himself is bringing to it. In an extensive interview with GQ in April, he explained: “I feel like the whole process of growing as a human, as a man, as an adult, as a husband or a father, a musician or an artist, all those things come back to awareness. And you know, how many different perspectives can I be aware of and how many different stories can I really pay attention to?” In a recent podcast interview, he phrased this idea more concretely: “All the things that I consider to be sort of magical and mystical about the [songwriting] process are constant…. I think I walk to the grocery store with the same level of mysticism as I write a song. It’s all process.”

Isbell is not overtly religious (he was raised Christian), but he speaks like his life is one extended Ignatian Examen. He constantly notices some new level of depth in the mundane. And it allows him to tackle even the most trampled topics of songwriting with fresh eyes.

For example, “Running With Our Eyes Closed,” is a love song, which Isbell says lends itself naturally to cliché. But he gives us this:

Love feels like running with our eyes closed. Tell me if you have ever heard a love song quite like that before. It evokes a visceral reaction, rings true in some deep part of us—if we are willing to tangle with Isbell’s lyrics in our hearts and minds, to take a chance that they might whisper something to us about our own broken, beautiful lives.

If we’re willing to bring nothing but our awareness.