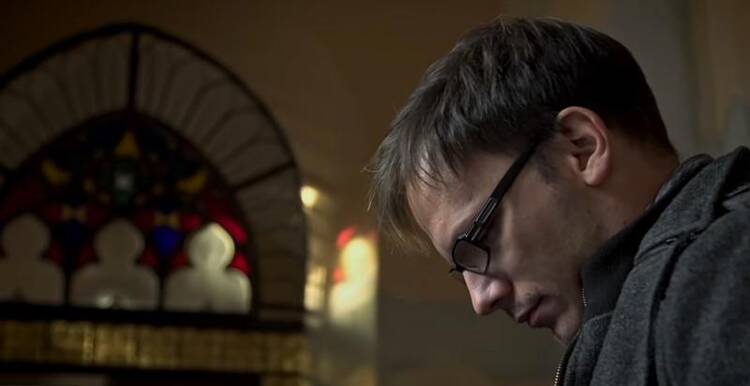 This is a screen grab from a scene in the documentary "Hide and Seek," which debuted on YouTube May 16, 2020. It accused the Polish church of continuing to cover up sexual abuse by Catholic clergy. (CNS photo/YouTube)

WARSAW, Poland (CNS) -- The centenary of the birth of St. John Paul II coincided with a new film, "Hide and Seek," screened on YouTube May 16. It accused the Polish church of continuing to cover up sexual abuse by Catholic clergy.

The same day, Archbishop Wojciech Polak, primate of Poland and the bishops' delegate for child protection, said he would ask the Vatican to initiate proceedings against Bishop Edward Janiak of Kalisz for failing to discipline a priest incriminated by the film.

Archbishop Polak said the film showed required child protection standards were still not being observed in the Polish church.

"I thank the victims who talked about the harm they suffered, and I urge everyone with knowledge about the sexual abuse of a minor to remember they are obliged in conscience and by law" to notify authorities, Archbishop Polak said.

"I am also asking priests, nuns, parents and educators not to follow the false logic of concern for the church in concealing the perpetrators of sexual offenses."

"Just Don't Tell Anyone," an earlier film by the same directors, Marek and Tomasz Sekielski, made similar allegations in May 2019 and attracted 23 million YouTube viewers.

Shortly after its release, the Polish bishops' administrative council met in emergency session and later admitted the church failed to act against clerical sexual abuse.

"There are no words to express our shame at the sexual scandals clergy have participated in. They are a source of great evil and demand total condemnation, as well as severe consequences for the criminals and for those who concealed such acts," the bishops said.

Earlier that same month, the Vatican announced Pope Francis had revised and clarified norms and procedures for holding bishops and religious superiors accountable in protecting minors as well as in protecting members of religious orders and seminarians from abuse. The norms made heads of dioceses responsible for alerting the proper Vatican authorities of all forms of suspected abuse, including the possession, distribution or creation of pornography involving a minor.

If asked to resign, Bishop Janiak would be first Polish prelate to lose his post over sexual abuse.