A quirky St. Francis from a giant of Italian cinema 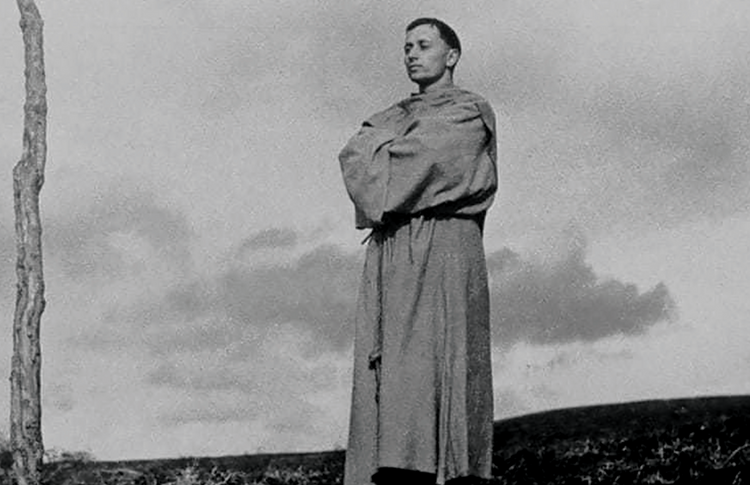 “The Flowers of St. Francis” is a film teeming with images both somber and exhilarating, but one of the more memorable ones comes early on, as St. Francis and his “flowers”—the 12 monks who share a stone hut near St. Mary of the Angels in Assisi—scamper through a downpour of biblical proportions. Free of shoes, free of doubt, giddy with their devotion to Jesus, they are totally soaked and entitled to be miserable. But Francis is joyful when they are thrown out of that same hut by a farmer with a donkey because, “It’s the first time Providence has made us useful to others.” One can almost taste the mud. The sense of delirious faith is equally palpable.

One of the complaints lodged against “The Flowers of St. Francis” when it first appeared was that it “lacked realism,” which is true—you can hardly believe the monks live through the downpour, or up to the standards they set for themselves. Other reviews were even harsher—the French critic Marcel Oms famously called “Flowers” a “monument to stupidity,” and the film made significantly less than $20,000 when it was released in Italy in 1950 (it arrived in the United States in 1952).

Encountering “The Flowers of St. Francis,” which turns 70 this year, will be an odd experience for most first-timers.

But both critics and consumers might have given the director the benefit of the doubt, given that he was that giant of Italian neorealism, Roberto Rossellini—a filmmaker who reimagined cinema itself in the aftermath of World War II, often enough using the ruins of war-ravaged Italy as his backdrop. If the film seemed fanciful, it was hardly a directorial error. And clearer heads leveled their own judgments: Pier Paolo Pasolini, a self-described “Catholic Marxist,” said the film was “among the most beautiful in Italian cinema”; Francois Truffaut called it “the most beautiful film in the world”; Martin Scorsese, in his 1999 documentary “My Voyage to Italy” (a title that echoes Rossellini’s own “Journey to Italy”), devotes an enormous amount of time to both Rossellini and “Flowers.” In 1995, the film was included in a survey of “some important films” that has since become known as “the Vatican’s best-of list.”

That said, encountering “The Flowers of St. Francis,” which turns 70 this year, will be an odd experience for most first-timers. Based on the 14th century “Little Flowers of St. Francis” and “The Life of Brother Juniper,” the film has only one professional actor, Aldo Fabrizi, who plays Nicolaio, a warlord laying siege to nearby Viterbo. (In an extended set piece, Nicolai, who seems to be channeling the early film comedian Edgar “Slow Burn” Kennedy, tries—and fails—to work up enough outrage to have the doe-eyed Brother Juniper executed.) In keeping with the neorealist ethic, the rest of the cast (uncredited) were not only nonprofessionals but members of the monastery at Nocere Inferiore, including Nazario Gerardi, who plays Francis as straight man to a group of monks whose mischief is usually inadvertent and occasionally bizarre. Juniper, or Ginepro (Fra’ Severino Pisacane), in an attempt to satisfy a brother who is coming off a fast and craves pigs’ feet, chases a live pig and amputates its leg. “Listen!” Juniper says of the screaming pig. “He’s thanking the Lord, too!” The swineherd is not amused. But in the face of Juniper’s innocence, he donates the rest of the pig to the apostles-to-be.

While neither Rossellini nor his screenwriter— Federico Fellini—were conventionally Catholic, both incorporated Catholic themes and morality in their work.

This is not realism, neo or otherwise. But while neither Rossellini nor his screenwriter— Federico Fellini—were conventionally Catholic, both incorporated Catholic themes and morality in their work. Rossellini made some sobering films (“Rome, Open City,” “Paisan,” “Germany Year Zero”); but “Flowers,” he said, was to focus on “the merrier aspect of the Franciscan experience,” on “the playfulness,” the “freedom that the spirit finds in poverty” and in an “absolute detachment from material things.” Rossellini said he wanted to capture “the perfume of the most primitive Franciscanism” as portrayed in The Little Flowers book, which was “the most accomplished form of the Christian ideal.”

Unlike The Little Flowers, which consisted of 78 chapters, “The Flowers of St. Francis” is made up of nine, plus a prologue (the mud and rain episode), which is included in the current Criterion Collection version but was deleted in some earlier renditions. (The film is also available to stream on the Criterion Channel.) This seems unthinkable, but so does St. Francis’ encounter with a leper, which is a chapter fraught with horror, mercy, faith and charity, and is easily the most disorienting episode in the film.

In that soggy opening, Francis is asked, “Why do men follow you?” His answer: Because God could find no creature more humble, no sinner more vile, and his mission would ensure that “men would see that every virtue and good comes from Him.” It may be a film nerd’s projection, but Gerardi bears a striking resemblance to Maria Falconetti, who played the title saint in Carl Th. Dreyer’s 1928 silent film “The Passion of Joan of Arc,” another film on that 1995 Vatican list celebrating the centenary of cinema. But it might just be the similar way the both actors cast their eyes toward heaven.

Juniper is the impish member of the clan (recall the mutilated pig); he’s a bit mad rather than feeble-minded like Brother Giovanni the Simpleton, who leaves his wife and family to follow Francis (who frowns on it). Juniper is so devoted to the ideals of Francis and Christ that he keeps giving away his tunic (the subject of an entire chapter), returning naked, and finally has to be commanded by Francis to remain clothed. In another episode, he decides to make enough food for two weeks so the brothers can go out and preach. He is not Julia Child, or even Guy Fieri; the food prep owes a lot to the era of silent comedy. But Juniper does embody the joy Rossellini wanted to convey in his portrayal of the religious; Francis, by contrast, represents self-sacrifice and contradictions.

In an episode about “perfect happiness,” Francis and a brother approach a well-to-do home to preach, are rejected, rejected again, cursed and finally beaten into the outdoors, where Francis concludes that perfect happiness lies in the fact “that we have done all this for the love of Christ.” It’s a sentiment echoed in the film’s closing moments, when the brothers—about to be dispatched in 12 different directions to preach the Gospel throughout a land that would eventually become Italy—prepare to leave Assisi. En route to the future, they are gifted by the townsfolk with food and supplies—which they promptly give away to those more needy, and go on their way held aloft by faith and the spirit of God. They are humble. And we, as Rossellini intended, are humbled.