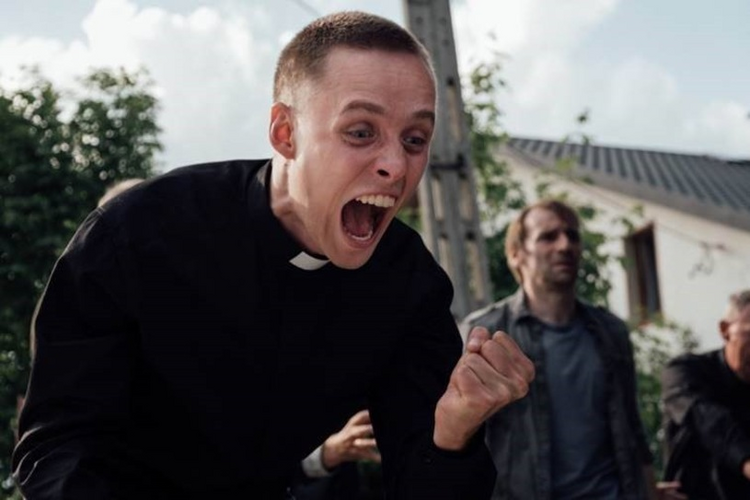 Two lines of dialogue at the start of the ferocious “Corpus Christi” come back and haunt the entire movie. “Each of us is a priest of Christ,” Father Tomasz (Lukasz Simlat) tells his congregation, the inmates of a Polish correctional facility for “youthful offenders.” Few of them seem young and none seem a likely candidate for rehabilitation, with the possible exception of Daniel (Bartosz Bielenia), a young man with a calling but little hope. “No seminary will accept a convict like you,” Tomasz tells him. It is not exactly the Catholic version of a Catch-22, but the redemption Daniel hopes to find in Christ is indeed the same one being denied by his church.

“Corpus Christi” presents us with something of a chewable paradox: Is the church, the conduit of salvation, denying Daniel salvation?

“Corpus Christi” is not a critique of Catholicism, though; it may not even be a deliberately Catholic film. There seems right now to be pan-global fascination with the conundrums of the priesthood among the makers of popular culture (see “Fleabag,” to cite one recent example), and “CC” fits the fashion. At the same time, the film’s director, Jan Komasa, presents us with something of a chewable paradox: Is the church, the conduit of salvation, denying Daniel salvation? Like several of his predecessors in Polish-Catholic cinema—Krzysztof Kieslowski (“The Decalogue”), for instance, or Pawel Pawlikowski (“Ida”)—Komasa puts faith in a contemporary frame, asking anew what we believe and why we believe it.

The film is also about the amorphous nature of earthly redemption. How will it come? What shape will it take? Poland’s entry for the Oscar this year, “Corpus Christi” is not just an allegory of faith, but also something of a thriller: Will Daniel be found out? To explain: When he’s paroled to work in a sawmill owned by the mayor of a small village (Leszek Lichota), he decides to go AWOL, passing through the tiny town where, through a series of circumstances and some outright lying, he is mistaken for a priest. When the local pastor suffers a collapse, Daniel is drafted into full-time duty. Which he embraces heart and soul.

The film is also about the amorphous nature of earthly redemption. How will it come? What shape will it take?

In fact, Daniel—who renames himself “Father Tomasz”—has a gift for the ministry. After a few missteps that are rigorously scrutinized by the jaundiced sexton Lidia (Aleksandra Konieczna), he says a muscular Mass (modeled on his mentor’s delivery back at “juvie”) and exults in his blessing of the parishioners, heaving holy water in the air like a human geyser and delivering sermons that invigorate a spiritually damaged community. As indicated by an oft-visited, roadside memorial of flowers and photographs, seven local people were recently killed in a car crash. “Where’s the seventh victim?” asks Daniel, looking at the six posted pictures. That man was the killer, the grieving survivors tell him. He was drunk. He killed them on purpose. Their grief is crazed; the widow has been not just ostracized, but terrorized.

Daniel makes it his mission to save them from themselves, including Lidia, whose son died in that crash, and Lidia’s daughter, Marta (Eliza Rycembel), who knows more than she is telling about the crash, and with whom Daniel will have a head-on romantic collision.

Daniel/Tomasz also has to save himself, which is no mean feat, his new mission being founded on a lie and as such— in a movie about salvation—must come tumbling down. Or does it? As much as we can see from the start that Daniel will find the opportunity to serve in the position for which he seems to have such a natural aptitude, so do we expect him to be found out. But it is to the credit of writer Mateusz Pacewicz—and Komasa, and the utterly convincing Belenia, whose face could have inspired Goya—that little which happens is what we expect, or necessarily want, but the film will resonate persistently. 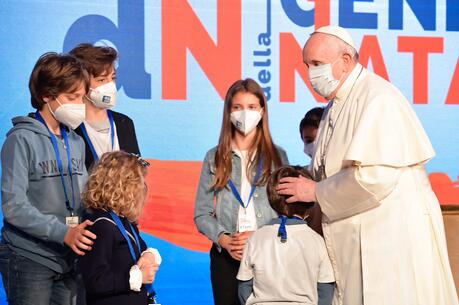 Pope Francis: Countries with declining birthrates are ‘rich in resources but poor in hope’
The pope encouraged all government efforts for helping families’ real needs, saying, “if families are not the focus of the present, there will be no future.”
Carol Glatz - Catholic News Service May 14, 2021