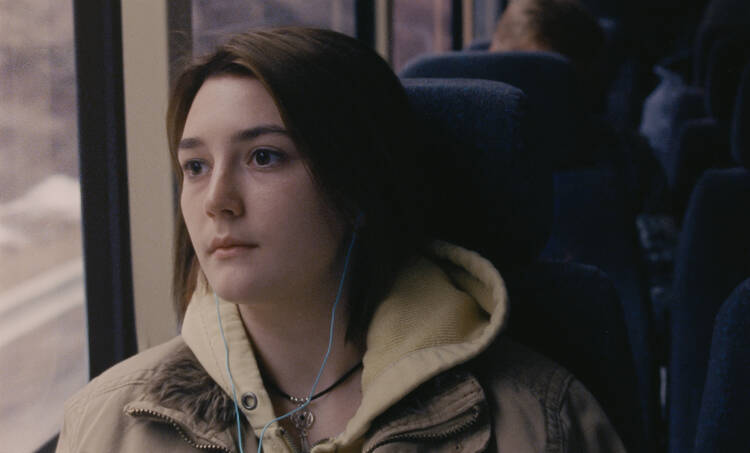 I suppose America asked me to review “Never Rarely Sometimes Always” because I am pro-life but critical of the mainstream pro-life movement. I especially reject pro-lifers who demonize women and make excuses for men, and who refuse to understand why abortion feels like the only choice for some women. Things are slowly changing, but much of pro-life culture is still propaganda. I abhor propaganda, even when I agree with the message it delivers. If I’m watching a movie, I want a work of art, not a wheelbarrow for dumping a message at my feet.

“Never Rarely Sometimes Always,” written and directed by Eliza Hittman, is no wheelbarrow. It is a deft, delicate and sometimes searingly painful and realistic portrayal of two teenage cousins, Autumn (Sidney Flanigan) and Skylar (Talia Ryder), who travel from their rural Pennsylvania town to New York City, where Autumn can get an abortion without parental consent. For a longish film, it is short on plot and dialogue, relying heavily and successfully on glances, murmurs and laconic comments. The script and acting are superb, flawless. This film never tells, only shows, and it does it so well.

“Never Rarely Sometimes Always” never tells, only shows, and it does it so well.

The movie astonished me over and over with its avid eye for revelatory details. I’ve been to that crisis pregnancy center, with its shabby, donated furniture and dreary floral motifs, and I’ve seen that unprofessional volunteer secretary who smiles and wipes her nose. The counselor who meets with Autumn is so kind but so clueless. “Are you abortion-minded?” she earnestly asks, and I winced. I have heard that phrase before, and I know how clunkily it lands on the ears of a teenage girl in need of real help.

But the realistic details aren’t all damning. The throng of protesters outside the clinic aren’t aggressive fanatics screaming threats and waving bloody posters; they are normal folk, including a few Franciscan friars wearing puffer jackets over their grey robes, carrying a banner of Our Lady of Guadalupe as they sing and pray the rosary. The film even briefly shows a live sonogram of a second-trimester baby, and it gives you a good, long listen at a healthy fetal heartbeat—two things I never expected to see in a pro-abortion movie.

But yes, I call it a pro-abortion movie. It does have an agenda, and it deliberately uses its sophisticated, hyper-realistic style to disarm the viewer, making us believe Hittman is simply recording facts as they are in real life. But the facts are carefully curated here. Hittman may not deliver her message with a wheelbarrow, but she does deliver it, mainly through the specific details she chooses not to showcase.

The film does have an agenda, and it deliberately uses its sophisticated, hyper-realistic style to disarm the viewer,

What does “Never Rarely Sometimes Always” show? A world where every single man is some kind of predator. The girls work for a tyrant and a fetishistic pervert; the stepdad is a beer-swilling lout who must be helped on with his jacket and who insults even the dog for being a “easy.” A businessman on the subway exposes himself, and the one helpful boy they meet is nakedly hoping to be repaid with sex. This is a man’s world indeed, and the girls, at their tender age, are fully resigned to it. Autumn receives a pamphlet called “The father's responsibility” and her eyes bulge with disbelief. Early on, one cousin says, “Don’t you ever just wish you were a dude?” and the other answers, “All the time.”

This world is real for some women. I’m not saying it’s not real. But in real life, facts do not all neatly line up and point to a single idea. In this movie, they do. But Hittman does it so subtly, we don’t immediately realize what we are being shown.

In one poignant scene, Autumn comes upon her not-unwilling cousin making out with that helpful boy against a pillar. Autumn, hidden, grasps Skylar’s hand, echoing a previous scene where the clinic worker grasps Autumn’s hand as she prepares for the abortion. Women must help each other, as men do what men do. In the excruciating moments that give the film its title, we watch Autumn’s face slowly change, redden and crumple as a routine questionnaire finally reveals some information about the boy who impregnated her. This is the reality that brings Autumn to the clinic. Of course she’s “abortion minded.” What other choice is there?

In real life, facts do not all neatly line up and point to a single idea. In this movie, they do.

Up until the point when Autumn actually undergoes the abortion, Hittman shows us everything, even incidental, world-building details like a stray extension cord dragged across the dingy bedroom carpet. We witness Autumn icing her nose and then forcing a safety pin through it, then stanching the welling blood. The camera blandly watches Autumn reach between her thighs to urinate into a cup. it lingers over a bloody pad as her cervix begins to open. We even see forceps grasping the laminaria stick they will insert in her. We see details, details, details, unflinchingly, throughout. But the one detail at the center of the plot, the abortion itself, we do not see.

This is ostensibly because Autumn is unconscious, and we only see what she sees, but the real reason is that abortion is not actually the center of the film. It is not truly ever questioned as a choice.

The clinic worker gently, insistently asks Autumn if she is there by her own free choice. But the film itself never allows the viewer a choice about what to think. For all its deft crafting of real-life detail, it never admits any reality besides abortion as saving grace. It does not take the risk of showing pro-lifers as competent or helpful, and it does not take the risk of showing abortion providers as anything else. They are uniformly professional, compassionate and honest, and abortion is silent, painless and streamlined.

For all its deft crafting of real-life detail, the film never admits any reality besides abortion as saving grace.

\In this world, Autumn’s true suffering stems from two sources: men and bureaucracy. The film seems to shrug at the problem of men. What can one do? But girls like Autumn (and eventually Skylar, who is heartbreakingly impervious to learning anything from their trip) will always need abortion to be cheaper, faster, easier and closer to home. That is what they need. This message lands neatly at our feet.

After a 10-minute procedure, Autumn sips some water and rests, and then she is done. She tells her curious cousin the abortionists were “nice enough,” and as they eat fries together, she smiles for the first time in the movie. They head for home, relieved, and the movie ends.

It all looks and feels so real, until you start to think about what they did not show.

What ‘Jojo Rabbit’ could learn from Mel Brooks
Simcha Fisher

Natural Family Planning can be hard and expensive to use. Can new tech help?
Simcha Fisher

The film insisted we consider Autumn as a real person, and so I found myself wondering what would happen when their bus reaches Pennsylvania. Will her stepfather beat her for running off? Probably. Will her employer prosecute her for theft? Certainly. Will she find a boyfriend who agrees to wear condoms more than “sometimes”? Doubtful. What will she do? Just keep going to New York for abortions until she is old enough to sign the forms herself? Are we supposed to imagine the taciturn and self-reliant Autumn will keep her follow-up appointment and phone a stranger for help in discerning safe relationships for the future? Having been trained by the film to insist on verité, I rejected this possibility.

I loved the style of this movie. I loved the acting and the cinematography. I loved how Autumn is a wounded girl, not a murderer or a selfish wench or a slut. But I hated the dishonesty that unflinchingly told the truth about every ordeal, except the one it all hinges on.

In the end, I felt like I had sat through a one hour and 40-minute-long public service announcement: realistic enough to make us understand it is about real people just like us, pointed enough to drive home a single answer to our problem. Call this number and get help. Watch this movie and see why we need better abortion access.

And that, dear readers, is not a real film. That’s propaganda.