‘Dana H.’: She was abducted, but she did not lose her faith. 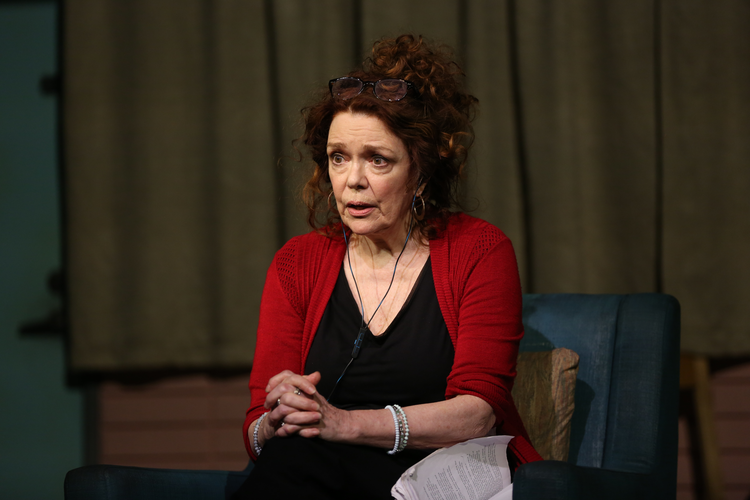 In ‘Dana H.,’ Deirdre O’Connell lip-syncs to a recorded account of Higginbotham’s abduction by a disturbed client some 25 years ago (photo: Carol Rosegg).

Dana Higginbotham is both here and not here. A hospice chaplain from Florida, she is the subject of “Dana H.,” an extraordinary new play by her son, Lucas Hnath, now at the Vineyard Theatre in Union Square in New York. And though her actual voice can be heard throughout the play, she is not onstage; instead an actor, Deirdre O’Connell, lip-syncs to a recorded account of Higginbotham’s abduction by a disturbed client some 25 years ago.

That may sound like an odd device, but Hnath—author of the plays “A Doll’s House, Part 2” and “The Christians”—knows exactly what he is doing, and the show’s mix of harrowing verisimilitude and eerie remove is remarkably potent.

Dana Higginbotham is the subject of an extraordinary new play by her son, Lucas Hnath.

This double vision might also have been inspired by his mother’s layered spirituality. For, as Higginbotham says in the show and told me in a recent interview, she often feels set apart—in the world but not of it, to use a scriptural formulation.

“People refer to that a lot of times in casual ways—you know, ‘when bad things happen to good people.’ But that’s usually things like a chronic illness or death, things that are to be expected in the term of life. The totally unexpected takes you a bit off center from where you were, and maybe even makes you more realistic. Everyone else seems to be a bit naïve.” Sometimes, she told me, she will be “sitting with my hospice team, the nurses, the social workers, the managers, and the talk they talk—it’s like they don’t even see this world.”

As Higginbotham told me in a recent interview, she often feels set apart—in the world but not of it.

Higginbotham’s ability to see through surface reality to a deeper truth feels subtly but strongly linked to her hospice practice, in which she helps people prepare to leave this world for another. It is a connection Hnath’s play makes explicit, as the abduction story is bookended by her descriptions of her ministry to dying patients and their families.

“When a person is in their final hours of life, and sometimes even before those final hours, pretty much everyone has pulled away from them and they’re just waiting,” said Higginbotham. “They’re isolated. This is a recurring theme in my life, right?”

Indeed it was her isolation, after a divorce and a consequent job loss, that made her an easy target for her abductor. It was not always so. Raised in Pittsburgh in a Presbyterian household, she dreamed equally of being an actress and being an evangelist along the lines of the popular faith healer Kathryn Kuhlman. She did theater in college, then went into radio and music production, which took her to Miami. There she had Lucas with her first husband, a recording engineer, and opened her own recording and rehearsal studio. But she soon reached a crossroads.

“I had been involved in witchcraft,” she said matter-of-factly—a tendency toward the dark arts she attributes, in the show, to her mother telling her she was evil from the age of 3. In Florida, with a young child, she said, “There came a point when things just started going wrong. My business burned down, and it would just seem like I was being chased by the demon. I didn’t want any influence of that over Lucas; I never wanted that to touch him. So I renounced all of that and turned my life over to the Lord.”

Not long after, she was finally able to realize her pastoral ambitions at Reformed Theological Seminary in Orlando, which accepted women in ministry, however grudgingly. “Men were given permission to leave the room when it was my turn to preach,” she recalled drily. She later did street evangelism with her second husband and Lucas, and eventually found her way to a chaplaincy at a psychiatric hospital, where she has served patients of all denominations, “even atheists,” she said.

The long episode with Jim—which involved myriad violent crimes, including many inflicted on her, as well as the near-complete indifference of law enforcement to her plight—didn’t shake Higginbotham’s faith so much as reorient it.

The long episode with Jim—which involved myriad violent crimes—didn’t shake Higginbotham’s faith so much as reorient it.

“I would compare it to going through a loss of innocence,” she said. She admitted that her faith practice was not much help during the worst of it. “I was pretty much in trauma the whole time. It was constant: Don’t look in the mirror, somebody’s following us, and looking down at the knife” held by her abductor. In her own experience and that of her patients, intense pain can block access to prayer: “I mean, you can’t even pray when you have a toothache. How was I going to pray?”

But as she reflected on this horrific chapter and what it revealed to her about the way the world really works, I had to wonder: Where does God fit into it? It’s the theodicy question, basically: What kind of God would make or allow a world where this could happen?

“It’s that damn free will,” she said. “He didn’t make this world—we did.” But while she doesn’t think God could create or intend suffering, she does “firmly believe that ‘all things work together for good for those who are called according to his purpose.’ Because he does love us. And I do believe that though life is kind of a dark place, there are moments where he has worked [things] together for good.”

In her own life, she can point to “empathetic witnesses” who have helped her at various points through her own dark periods—a high school drama teacher who steered her away from suicide, for instance—and whom she feels God placed there for her. And while she is content with being a hospice chaplain, there is another way she would like to apply her own experience.

“My burning desire is to be out there doing either speaking or trauma counseling, working with moral distress in P.T.S.D. victims,” she said, referring to a condition afflicting veterans and health care professionals who have faced dilemmas where they “know the right thing to do, but there are reasons they aren’t allowed to do it.” Her experience as a helpless hostage to a violent man gives her the ability, she said, to “sit face to face with some of our patients who are veterans, and they get that I get that. That is the healing key right there: Someone else gets it.”

This is also what theater can do. Of O’Connell, the performer brilliantly embodying her onstage, Higginbotham said, “I think that she may actually come as close as possible to going through what I went through to some degree.” As for her son’s play, which she has seen twice now, she said the experience of viewing it, as both its subject and its literal voice, “wasn’t like watching a show. But it was a good thing. It was very validating.”