How Playwrights Horizons is shining a spotlight on God off Broadway 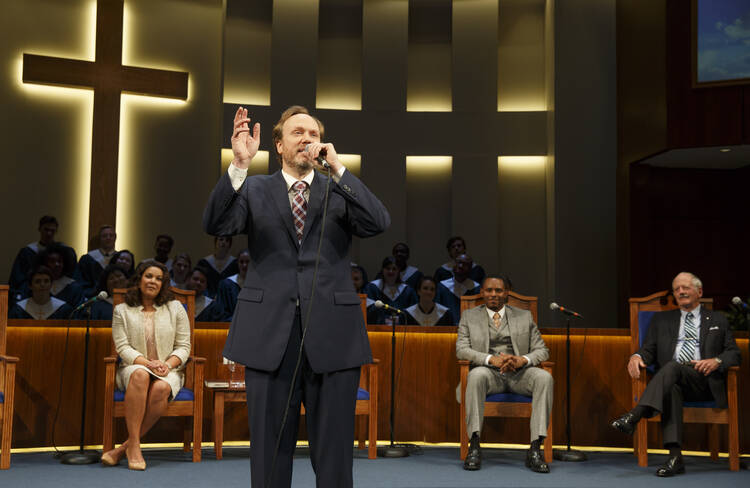 “The Christians” at Playwrights Horizons pondered the theology of hell and the authority of scripture (photo: Joan Marcus).

Off-Broadway isn’t a distinct neighborhood in New York City; it refers simply to any Manhattan theater with a middling budget size and seat capacity. But the theater company Playwrights Horizons is literally on 42nd Street, a few blocks west of Times Square and the heart of Broadway’s commercial theater district. And in more than just geography Playwrights Horizons has long epitomized Off-Broadway, producing new plays by the likes of Christopher Durang, Annie Baker and Lynn Nottage that have had as much national impact as anything originating on Broadway, if Pulitzer Prizes and regional productions are any guide.

Playwrights Horizons has been a place where New York theatergoers can get an above-average dose of plays on spiritual themes.

Playwrights Horizons has also been a place where New York theatergoers can get an above-average dose of plays on spiritual, even religious themes. It was there that I went for my first review for this magazine—10 years ago—of Evan Smith’s “The Savannah Disputation,” in which a young evangelical Christian argues with her Catholic neighbors, and eventually their priest, that they are not true Christians at all. It is where Lucas Hnath’s Socratic-debate-as-church-service “The Christians” pondered the theology of hell and the authority of scripture; where Heidi Schreck’s “Grand Concourse” put a Bronx nun in the crosshairs of a crisis of faith; and where more recently the musical “A Strange Loop” climaxed with a disturbing gospel-style refrain in the vein of a black-church altar call, “AIDS Is God’s Punishment.”

The play currently running on its mainstage, “Heroes of the Fourth Turning,” is a meaty, up-to-the-minute portrait of red-state Catholics, written by Will Arbery, the son of two esteemed academics at Wyoming Catholic College. It has garnered ecstatic praise from mainstream critics as well as from Rod Dreher at The American Conservative. (The New York Times recently noted that R. R. Reno and Sohrab Ahmari were spotted at a recent performance.)

The play currently running on its mainstage, “Heroes of the Fourth Turning,” is a meaty, up-to-the-minute portrait of red-state Catholics, written by Will Arbery.

It would not be fair to say that religion is a dominant strain at Playwrights Horizons, which stages all new work on a wide variety of themes, or that it is the only New York theater with God on its mind (“Doubt” originated at Manhattan Theatre Club, for instance; “Sons of the Prophet” at Roundabout Theatre Company). But it’s an unmistakable throughline of the theater’s programming, and it can be traced to artistic director Tim Sanford, who has had the job since 1996 (and just announced that he will leave the post in mid-2021).

Though he is not a religious person himself, Mr. Sanford explained in a recent interview, his father was a Methodist minister who originally felt called to ministry after being a “staunch pacifist” during World War II. Much of his father’s pastoral career was in the cause of ecumenicism, Mr. Sanford said, and in what he called “a very strong wrestling match with the right wing of the Christian party.”

In his experience, the contemporary theater is full of folks like him: adrift from organized religion but still seeking meaning and community.

“It's pretty easy to wriggle out of Christian influence when you’re in a super progressive church,” Mr. Sanford said. Some influence sticks nevertheless. “If you asked the people in our field what their parents did, I would guess that ministers and therapists probably enjoy a fairly high percentage in churning out secularized, no longer practicing, but still metaphysically and spiritually inclined people.”

That squares with my own experience and observations, of both myself and others. I have often thought of theater as my church, for reasons that seem fundamental to both practices (ritual, communion, iconography), and know plenty of like-minded critics and artists. As Mr. Sanford put it, “I do think it is baked into theater—the radical empathy of assuming that it’s possible, or that it's at least a project worthy of attempt, to inhabit another person. To get inside of them. That’s kind of a metaphysical notion to begin with.”

In Sanford’s experience, the contemporary theater is full of folks like him: adrift from organized religion but still seeking meaning and community.

Unsurprisingly, Mr. Sanford’s studies included heavy doses of theater, literary criticism and philosophy, particularly Henri Bergson, who had a “view of time that was not linear, it was volumetric. He thought of time as being something that fills up the vessel of the person. Time doesn’t go away; it’s not discrete, it's interpenetrating.” Bergson’s thinking informed Sanford’s dissertation on Proust, Pinter and Beckett, and it still informs the way he thinks about playmaking. “Theater is the only art form that uses human beings as its clay. And I think when you’re working on a play with actors, it’s inside of them somewhere, and the change that is effected on them is cumulative.” The plays he has programmed over the years, he said, also live inside him somewhere—and in their audiences:

“The other common thread between a play and a religious service is its repeatability. You go to church no matter how you’re feeling because you understand that it’s cumulative. You might have a moment of redemptive insight, even just five seconds. Well, that gets added to your self, right? And that's why you do a play.”

While you could tick off Playwrights Horizons’ programming by theme or genre—post-apocalyptic sci-fi (“Mr. Burns, a post-electric play”), transgender family comedy (“Hir”), grief meditation (“The Treasurer” or “A Life”)—Mr. Sanford insists that he doesn’t program plays by topic, even if he admits that he is drawn to some more than others.

Their Eyes Were Watching God: Two new plays set out in search of the divine
Rob Weinert-Kendt

“I felt called after the Trump election to try and do something, and I did plays that were topical in certain ways,” he said, citing Robert O’Hara’s “Mankind,” about a post-female dystopia, and Lindsey Ferrentino’s “This Flat Earth,” about a school shooting. Topical doesn’t mean preachy, he emphasized. “I think the best way to really answer back to the world is to write a good play, not to turn a pamphlet into a play.” He cited Cleanth Brooks’s concept of the “heresy of the paraphrase,” by which he meant “that art is not paraphrase-able, or if it is—if its goal is to give you a message or something you can boil it down to—it can’t possibly be a good play.”

Not every play at his theater has cleared this bar, in my opinion, but its batting average is high. And if the work at Playwrights Horizons, including comedies and musicals, seems to have in common a certain seriousness of intent, Mr. Sanford said, “That’s more a reflection of my belief that theater really calls us to examine who we are and what we believe.”

*Correction: an earlier version of this article incorrectly identified Mr. Sanford's dissertation as a masters thesis.