Stephen Adly Guirgis on God, Broadway and writing for women of color 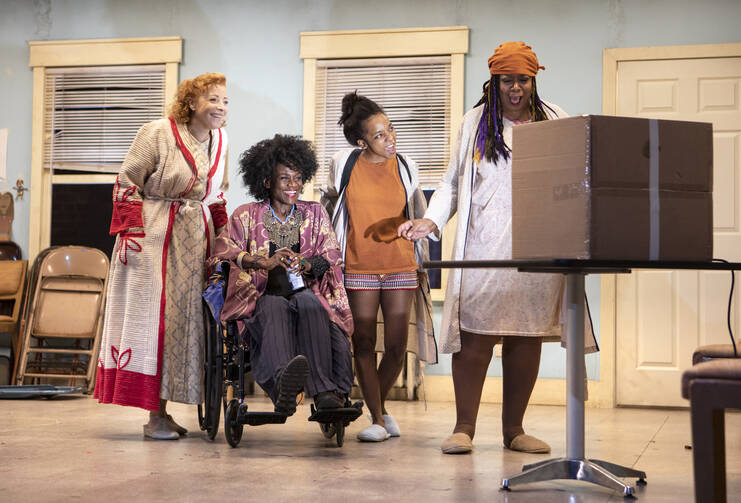 “Look, man, I want to believe in God, and I often do,” the playwright Stephen Adly Guirgis tells me, sitting at a desk in the cluttered, Upper West Side Manhattan apartment he has lived in more or less his whole life, and from which since the mid-1990s he has written a spate of brilliant, profane, deeply human stage plays, including the Pulitzer winner “Between Riverside and Crazy.”

This revealing, self-deprecating quote about his occasionally aspirational religious faith—which comes up as we discuss the thorny question of euthanasia raised by a scene in his newest play, “Halfway Bitches Go Straight to Heaven,” at the Atlantic Theater—could be a line of dialogue from one of his plays, or even serve as a mission statement for the not-quite-lapsed-Catholic dramatist. That’s because all of his characters, from the junkies of “The ________ With the Hat” to the convicts of “Jesus Hopped the ‘A’ Train” to the damaged women of “Halfway Bitches,” are driven, or dogged by a sense of a larger purpose from which they inevitably fall short. Whether that larger purpose takes the form of familial loyalty, scheming self-interest or an overarching call to eternal justice, Guirgis’s characters have motivations and beliefs beyond their own immediate, often craven needs. The messy collisions among these characters and their clashing worldviews are the grist of his drama.

All of his characters are driven, or dogged by a sense of a larger purpose from which they inevitably fall short.

This is certainly true of the New Testament characters Guirgis reimagined for his 2005 play “The Last Days of Judas Iscariot,” his most overtly religious work, which took the form of a trial of Jesus’ friend and betrayer (and which inspired the book A Jesuit Off-Broadway, by James Martin, S.J., editor at large of America, who has become a sort of chaplain to Guirgis and the troupe he started with a group of actors, LAByrinth Theater Company). That play was inspired by another thorny question: Was Judas really beyond redemption, not for his betrayal but for his suicide? “The guy felt so bad, he hung himself,” as Guirgis puts it. “And that was the big crime, not the betrayal—it was the despair.”

If Guirgis has been tempted to despair, he has had his share of reasons. His close friend and LAByrinth co-founder, Philip Seymour Hoffman, died of a drug overdose five years ago after years of struggling with addiction. Guirgis admits he still harbors anger toward those who drank and partied with Hoffman in his last years, but he is philosophical about assigning blame.

“There was a close friend of mine who had been doing drugs with him nightly, and when Phil died and people learned about this friend, they really came down on him,” Guirgis says. “In my mind, even though obviously it wasn’t a good thing, it was like: Whoa, but that’s what junkies do.”

If Guirgis has been tempted to despair, he has had his share of reasons. His close friend Philip Seymour Hoffman died of a drug overdose five years ago.

That is why, for instance, in “Halfway Bitches,” a transgender hustler named Venus is portrayed both sympathetically—for the abuse she suffers, and the care she doles out to other marginalized folks in the halfway house of the play’s title—and harshly, for continuing to use drugs in a place where many need encouragement to stay sober, not temptation to stray. “I try to have sympathy for, or empathy for even the worst type of characters,” says Guirgis. “Maybe that’s a way of looking for empathy or forgiveness for myself.”

The new play boasts his largest cast—18 characters, plus a live goat—and arguably his most ambitious social canvas. It is populated mostly with poor women of color, hashing through tough, intersectional dilemmas of race, class and sex, but it is running at an Off-Broadway theater where most tickets are $81.50—a steal compared to Broadway prices, but steep for the class of people depicted in the play itself. I have to ask him: What is his connection to the world of this play? And what makes it more than poverty porn, or what he calls “a poor people parade so rich people can feel better”?

He cites his background as an H.I.V. educator and conflict resolution specialist, work that took him to homeless shelters, prisons, schools and hospitals, and adds that “what put me into this world now is, there’s a shelter around the corner from here and I walk my dog by it every day.” He often sees its residents sitting on nearby park benches, and has noted sourly how “people in the neighborhood dealt with them, which was by making them invisible.”

The play he began to write about that shelter started off as a small downtown workshop, but soon ballooned into a major Off-Broadway production, in part as a means to revivify the LAByrinth company, which has faltered and fractured since Hoffman’s death.

If that writing process sounds like a leap of faith, that is not far off the mark. In fact, he says, prayer may be his most valuable writing hack.

“I was asked to write a play, and it wasn’t a good time for me to write a play,” Guirgis says almost plaintively, still looking equal parts shell-shocked and grateful for having written it anyway. He looks up at two cork boards with index cards bearing names of scenes from the play, some of them long since cut. “I don’t usually use things like this—this is more like what I might do for film and TV,” he says, confessing that while he usually is “guided by something that’s going on inside of me,” he wasn’t as sure in this case. “Instead of knowing why I was writing, I had to trust that it would be revealed, and to keep going.”

If that writing process sounds like a leap of faith, that is not far off the mark. In fact, he says, prayer may be his most valuable writing hack. “When I attempt to explain prayer, I usually say that I have great difficulty writing, and the last thing I do that works—it doesn’t work right away, but if I repeat, repeat, repeat—is prayer. In essence the act of prayer is a sublimation of the ego, an acknowledgement of powerlessness. Like, I can’t do this alone. I need help.”

With God on His Side
James T. Keane

Did he ever find his personal reason for writing “Halfway Bitches”? As usual, now that it’s done, he sees himself in many of its characters. But it’s more than that. “There's a young woman in the cast who says, ‘I think I know what this play’s about—it’s about how people don't care about black bodies,’” Guirgis says. To him, though, the point is more universal: “It’s that often people just don’t care about other people at all.”

This finally may be the curse that haunts both Guirgis and his restless characters: For all their faults, they can’t help but care. While he has no illusions that a single play can change minds or lives, he says, “If someone sees this play and it’s a little more difficult for them to pass a homeless person on the street, then that’s a little contribution.”