A beloved London neighborhood is the star of ‘The Street’ 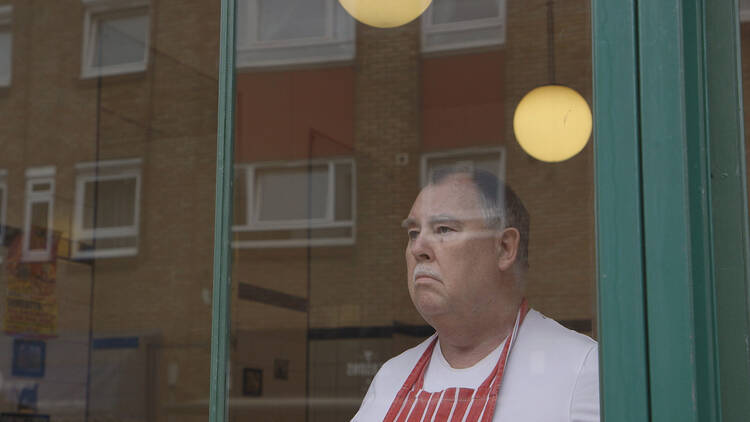 Unless you live somewhere like New York City or Los Angeles or a high-rent part of central London, it is unlikely that you would be able to watch a film in a cinema that is about a five-minute walk from the location depicted in the movie. And the location would most likely be no more than the setting for the narrative rather than the narrative itself. Even though a well-told story can make the location into a quasi-character—in the way that Dickens sometimes did with his version of London, or crime novelist Ian Rankin does with the city of Edinburgh—it is seldom that the place itself is the narrative and the central character.

Zed Nelson’s remarkable little documentary “The Street” (2019) achieves that. It is set in and about Hoxton, in inner North London’s Borough of Hackney, and has been showing at the Rio, Hackney, a recently restored independent Art Deco cinema.

Filmed over four years, the film is about the change that has come to Hoxton, the city’s latest chic, hipsterish district.

Filmed over four years, it’s about the change that has come to Hoxton, now thought of by almost everyone across London as the latest chic, hipsterish district. It is already a destination from Thursdays (which, we’re told, are the new Fridays) right across the weekend for the young and trendy. Local families, some tracing many generations of residency, are getting priced out. Nelson’s film therefore explores questions of gentrification, change and the loss of traditional local community and values in this and every city, laying them before his audience without verbal editorial or commentary.

What he filmed is its own commentary. To succeed as a documentary, the film must let the topic and characters speak for themselves. It succeeds. We meet an array of locals and their locale—shopkeepers and residents, the pubs, a man who could sell you any piece of carpet you wanted, a much-beloved bakery, the funeral directors and one of East London’s increasingly rare pie-and-mash shops.

We meet an array of locals and their locale—shopkeepers and residents, the pubs, a much-beloved bakery.

“The Street” is an intimate portrait. Nelson is primarily a photographer and, throughout his film, he favors composed, quasi-still shots, with hardly a camera tilt or pan. The effect is a series of tightly-focused vignettes that combine to capture the effects on the locals of the galloping gentrification of their neighborhood. The director’s voice is heard maybe three times at most, posing a question to one of the street’s characters. The gap between working-class and newcomers is plain to see; every now and again, there is a punctuation mark in the form of a short depth-of-field shot of the new skyscrapers in the financial district, looming over the Victorian streets where the younger, upwardly mobile professionals want to make their new homes. It is global capitalism and neoliberalism as a menacing, unstoppable force.

It would have been easy to present the new residents as the bad guys, but that is not the film’s aim.

But it is presented delicately. It’s not traditional versus incomer, without nuance. It would have been easy to present the new residents as the bad guys, wantonly destroying a community spirit that had built up since at least Victorian times, but that is not the film’s aim. The developers and owners of fancy upmarket craft beer shops, gourmet cafes and art galleries are not portrayed particularly sympathetically, nor is the sharp-suited, fit young real estate salesman who almost casually quotes a starting price of £2.25 million for a small apartment in one of the new residential blocks. They are not presented simplistically as the villains here. However, we are invited to ponder if they are as much entitled to be counted as bonafide denizens of Hoxton as those they are driving out.

The camera shocks us as a small shop or business we had just visited suddenly has shut for good.

Those locals themselves do not escape Nelson’s probing camera. Resistance to change is not celebrated without qualification; for example, at no time do we witness dialogue between old and new, and we wonder if maybe the locals should be less regressive. We hear racist comments on the lips of some of these locals. One shop owner decries the incomers and all the changes, as he frowns out of his café window at his street’s daily changes. Delivered almost as a coup de grace, his clinching argument: “and they’re French!”

Maybe things can’t always stay the same, and maybe change is inevitable; the film invites us to consider this for ourselves. It could be that the liberal capitalist system, which creates conditions for rapid change without respecting persons and livelihoods, community and traditions, is really to blame. At one point, like a thunderbolt, Nelson replays the BBC radio report of then-Prime Minister David Cameron’s fateful announcement of a referendum on Brexit. The resulting disaster already unfolding, the movie suggests, will hit us all; those cranes and new tower-blocks and the Victorian terraced streets and local traders will all suffer. Will this East End rise from the ashes once again, as after the wartime blitz? Will the mythical plucky Cockney prevail against all apparent odds?

‘The Cave’ Review: An oasis of hope amid Syria’s bloodshed
John Anderson

The most compelling feature of “The Street” is its narrative power, carried along over four or so years. The camera shocks us as a small shop or business we had just visited, and even got to know a little, suddenly has shut for good. After several such moments, the audience wonders, fearfully, what’s next? In parallel, we get to know several residents, some of them elderly and in poor health. They emerge as collateral damage; a homeless man living under a nearby bridge finds his rudimentary shelter destroyed by fire yet in his spoken response manages to quote Stendhal. Will they survive? The film holds the tension and so will this review.

“The Street” is a little gem, as are Hoxton Street and its people, but it is no exercise in nostalgia. It is about community, cities and our future. As cities everywhere expand inexorably, and in this difficult, fractured moment in our history, this film is an important interrogation that gives us no easy answers.