Skip to main content
Signs Of the TimesNovember 9, 2015 issue

‘Brexit’ begins with a whimper 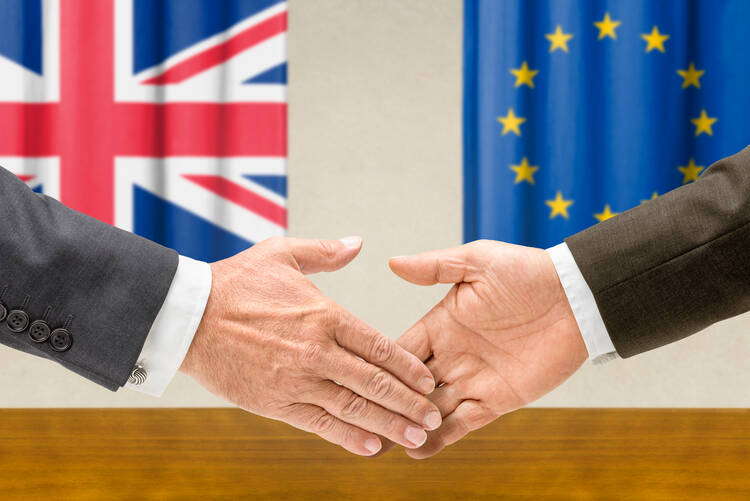 The shot, meant to be heard round Europe, was muffled. The opening salvoes have now been fired in the campaign for another referendum to be held in Britain, but they were far from deafening.

We have had recent experience of a constitutional referendum, on independence for Scotland, when all were astonished at the level of voter engagement and turnout. This time the proposed referendum is about whether the United Kingdom should remain in the European Union or leave it: the so-called Brexit. This vote will be a straightforward binary choice; so for each option an official campaign grouping was recently formed, and each began to make an initial pitch to a so-far unimpressed electorate. It feels dull already.

Opinions are as strong as interest is weak. Some British views on Europe are so entrenched that even a multi-megaton explosion would not shift them. One gets the sense that for quite a few of us, the European question is deeply connected to the problem, as some see it, of immigration. Syllogistically expressed, it goes like this: Unrestricted (as some have convinced themselves) immigration is bad; immigrants come from, or at least through, Europe; therefore Europe is bad. There has been a surge of good will, as elsewhere in Western Europe, toward the great numbers of refugees in recent months, but how long that benevolence might last is less certain. Furthermore, not everybody shares it.

The lack of interest most likely is linked to the lack of a date for the referendum. We don’t really have a year yet for the vote, let alone a month or a day. We do know that it will happen in the lifetime of this Parliament, because Prime Minister Cameron’s ruling Conservatives made this a clear electoral promise. The best we can project for now is that it will take place before the end of 2017.

Advance warning: This could all get very confusing. In these early days of the campaign, it appears that yes means the wish for Britain to leave the European Union, whereas no expresses the desire for it to remain. But both sides in the campaign would like to use the word yes if they can because, amazingly, they have found that the word sounds more positive in publicity than no. The risk is that yes could be understood by some voters to mean “yes to Europe” rather than “no to Europe”—if you are still following me. And vice versa. Or perhaps not.

The “no” side, advocating continuing British membership in the European Union, announced themselves with a campaign title that immediately caused hilarity. The abbreviation for Britain Stronger in Europe is B.S.E.—the same acronym used for bovine spongiform encephalitis, or mad cow disease, which hit Britain some years back with tragic consequences for a number of people here.

At the time, some latent xenophobia or at least anti-European sentiment got aroused, as there were allegations that only beef imported from Europe carried the infection. This was then countered by bans by many European countries on beef exported from Britain. Those advocating Brexit have formed into two groups, “Vote Leave” and “Leave. EU.” Each group won endorsement from the U.K. Independence Party leader, Nigel Farage, whose party failed to gain a predicted significant number of seats at the most recent U.K. general election, despite taking a large share of the popular vote.

It is too early to tell what will become the main battle lines in the campaign. The voting public’s perception of Europe remains unenthusiastic at best. Next to nobody nowadays remembers the genesis of the European Union, which began from a desire to avoid any repetition of the 20th century’s two catastrophic wars. That simply does not matter to Europeans anymore. The threat to peace and stability is perceived to come from elsewhere; intra-European armed conflict is unimaginable.

Still less is there any awareness of the roots in Catholic social doctrine, like the notions of solidarity and subsidiarity that animated such early 1950s advocates of a united Europe as Robert Schuman, who was deeply influenced by Leo XIII and Pius XII. Not only are such values almost invisible in what the European Union has become, but neither do they speak much to today’s thoroughly secularized society. Perhaps if these less extrinsic values were now heard again, European neuralgia and ennui might dissipate, and the looming, lengthy debate might provide inspiration.