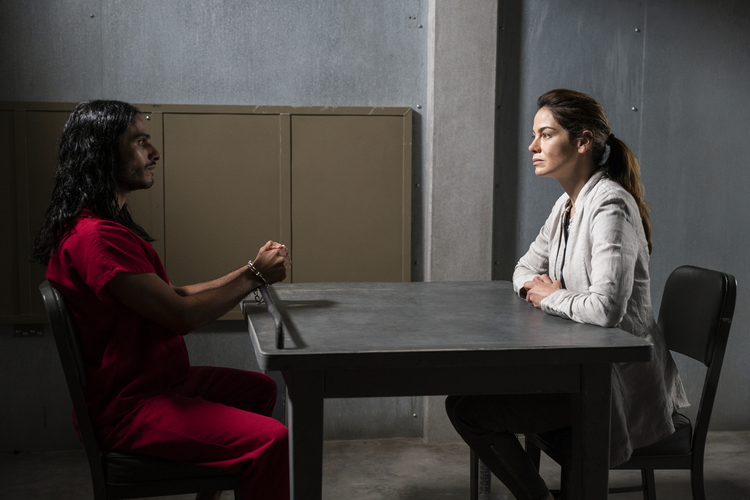 This review contains spoilers for season one of “Messiah.”

If Jesus Christ were to return to initiate an apocalypse in the Year of Our Lord 2019, how would we receive him? “Messiah” may have a prophetic vision.

In “Messiah” the titular Christ figure, Al-Masih (played by Mehdi Dehbi), inspires hope among the faithful by performing what appear to be miracles and prophesying about an inevitable Judgment Day. He also rouses suspicion among the skeptical, particularly the C.I.A. agent Eva Geller (Michelle Monaghan), who believes that Al-Masih is not the divine prophet he claims to be. The agnostic’s doubt is what drives the show’s fundamental question: Is Al-Masih really the Messiah the world has been waiting for, or is he actually a false shepherd leading his flock astray?

Is Al-Masih really the Messiah the world has been waiting for, or is he actually a false shepherd leading his flock astray?

First, it seems prudent to address some of the controversy that has surrounded “Messiah” since its release. Some religious groups have expressed concern that the show’s premise veers too closely to sacred territory, arguing that it’s in poor taste for a mainstream Netflix show to fictionalize the second coming of Christ. Others were worried that the drama’s suspenseful tone in conjunction with its portrayal of Muslim characters would unwittingly promote Islamophobia.

I confess that I am not as familiar with the role of Jesus (or ‘Isa) in Islam as I am with his place within the Judeo-Christian tradition, so I can’t unequivocally say whether these criticisms of “Messiah” are justified or not. I did, however, reach out to several academics with specializations in Christianity and Islam who graciously shared their insights with me.

One such specialist was Wilhelmus Valkenberg, a professor of religion and culture at the Catholic University of America whose expertise lies in Christian-Muslim relations, comparative theology and interreligious dialogue. In an email, Mr. Valkenberg explained a few of the basics to Jesus’ unique presence in Islam. For instance, Muslims regard Jesus as a prophet—not the Son of God—who was born of a virgin and ascended to heaven after his people rejected his message. Jesus is still referred to as the Word in the Quran—although Muslims mean this in the sense that Jesus serves as a carrier for the word of God, not that he is divinely one with God, as Christians believe. Finally, although the Quran does not explicitly state what Jesus’ role is after his ascension, Mr. Valkenberg says, “there is a tradition that says that Jesus the Messiah will come back and usher in the end of times.” On these fronts, “Messiah” is fairly faithful to Islamic tradition.

I also spoke with Mansur Shaheen, a Kashmiri-American writer based in Washington, D.C., who has written about Muslim representation in entertainment media. Mr. Mansur expressed appreciation for the show’s nuanced depiction of Middle Eastern Muslims, praising “Messiah” for not only portraying morally complex, yet sympathetic Muslim characters but also for addressing our society’s tendency to blame religion when conflict arises.

So, beyond its initial controversy, does the show have any substance? Is there a deeper meditation on faith to be found in “Messiah” besides its realistic investigation into Al-Masih’s legitimacy? Well, yes, but you may have to look past the show’s hook to get there.

I have to confess: The first time I watched it, I disliked “Messiah.” It quickly became apparent to me a few episodes into the series that the show wasn’t going to give any definitive answers to Al-Masih’s messianic claims. It is more or less up to the viewer to decide whether the Iranian spiritual leader is actually the Messiah, a delusional charlatan or, more sinisterly, Al-Masih ad-Dajjal, an evil false prophet in Islamic eschatology, similar to the Antichrist.

I understand why “Messiah” left its central question unanswered. After all, it’s a shrewd business tactic: a prolonged mystery gives Netflix an incentive to renew the show for another season, and ambiguous endings prompt unappeased fans to continue theorizing online, giving the show a longer half-life in public consciousness than it may otherwise deserve. But I wasn’t satisfied by the season’s conclusion. In fact, it almost felt as if “Messiah” had cheated me in some way, as if I had been led on a wild goose chase for 10 episodes only to realize that I had been running in circles.

And yet, from a metafictional perspective, the show’s insistence on allowing the viewer to choose what they believe about Al-Masih’s character makes the very act of watching “Messiah” a kind of exercise of faith. You are not isolated from the ongoing challenge of acceptance or rejection that the show’s ensemble experiences throughout the series; you are also a part of the narrative. You decide what you believe and to what extent you believe it.

The show’s insistence on allowing the viewer to choose what they believe about Al-Masih’s character makes the very act of watching “Messiah” a kind of exercise of faith.

Yes, this creative decision is as pretentious as it sounds. Who would have guessed that a show about faith would invite you to wrestle with your own faith in a hypothetical context?

But if you can ignore the show’s desultory obsession with Al-Masih’s identity—admittingly hard to do given Netflix’s aggressive marketing campaign geared toward solving the mystery—the more interesting, polished aspects of “Messiah” begin to shine. What ultimately makes “Messiah” a compelling series is not Al-Masih himself but how the other characters respond in faith when their conception of reality is tested.

Take the subplot of Jibril Hassan (Sayyid El Alami) and Samer (Farès Landoulsi), two Palestinian refugees who follow Al-Masih to Jerusalem after he allegedly brings a sandstorm to Damascus that pacifies ISIS terrorists. When Al-Masih leaves the traumatized asylum seekers at the Israeli border to go where God calls him next, the two friends are confronted with a crisis of faith: retreat back into the desert or trust that God will deliver them if they stay.

What ultimately makes “Messiah” a compelling series is not Al-Masih himself but how the other characters respond in faith when their conception of reality is tested.

For Samer, the more educated of the pair, doubt sets in rather quickly. The dire situation of Samer and his fellow refugees makes him resent Al-Masih, who purportedly abandoned the group to fend for themselves at a hostile outpost. Deciding that his chances for asylum are hopeless, Samer leaves Jibril for the safety of a refugee settlement in Syria, where he eventually becomes radicalized by fundamentalist terrorists, who prey on his vulnerability and despondency.

What’s it like to play Pope Francis? An interview with Jonathan Pryce on ‘The Two Popes’
Jesuitical

Samer’s progression into religious extremism is tragic, but the show makes it clear that his transformation was not random or predestined. Through a heartbreaking combination of hopelessness, trauma, adversity and lack of faith, Samer becomes susceptible to hatred and then chooses to worship it.

On the other side of the spectrum, there is Jibril, who holds on tightly to the belief that Al-Masih has set him on God’s path. Jibril never loses sight of his conviction, even when he is tortured by Israeli operatives and left to die in the desert. As a result, Jibril’s trust in God moves him to act righteously; he reminds the world of the refugees’ humanity by demonstrating a courageous performance of nonviolent resistance at the border, thereby completing the pacifistic action that Al-Masih started. Consequently, Jibril becomes a spiritual leader in his own right, using his faith to continue advocating for justice.

Jibril’s trust in God moves him to act righteously.

Jibril and Samer’s story is only one of several threads that make up a rich, intricate tapestry of responses to the call of faith in “Messiah.” In the end, it doesn’t matter whether Al-Masih is the Messiah or not; it is what his followers choose to do with their faith that gives his ministry relevance.

@izzysenechal
Show Comments ()
Join the conversation: Login or create an account
Before you can comment, you need to update your profile to include your first and last name, as required in our comments policy. Then reload this page and you'll be set up for commenting. Update your profile
Show Comments ()
Comments are automatically closed two weeks after an article's initial publication. See our comments policy for more.