‘I Lost My Body,’ up for best animated Oscar, is a moving meditation on grief 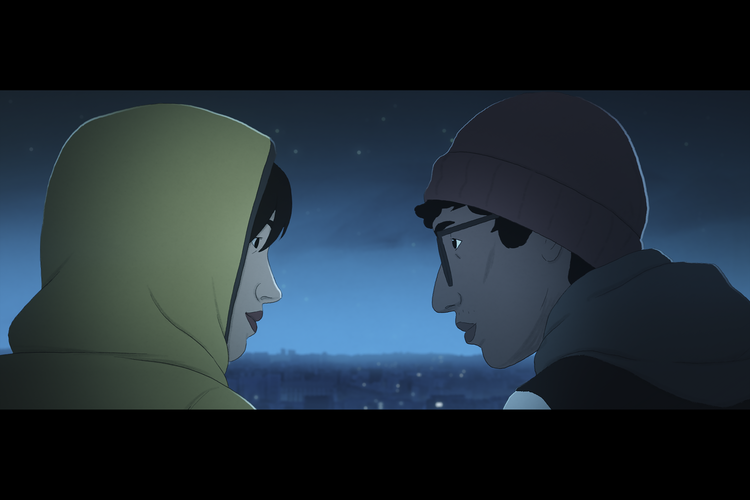 “I Lost My Body,” which is nominated for best animated feature at this Sunday’s Academy Awards, might be the freshest film experience of 2019, both in story and style. Tracing the harrowing journey of a severed hand through the streets of Paris, the film is a meditation on how mourning is a complicated expression of both loss and hope.

The French film follows Naoufel (voiced by Hakim Faris), a young French misfit who dreams of becoming an astronaut and a pianist but is struggling to make ends meet as a pizza delivery driver. After landing an apprenticeship with a carpenter to get closer to his love interest, Gabrielle (Victoire Du Bois), Naoufel loses his hand in an accident. His severed hand comes to life through unexplained supernatural means and goes on a journey through Paris to find its body as the film cuts back through Naoufel’s memories of loss and love. Though this sounds like the premise of a horror film or Tim Burton dark comedy, the film turns out to be a contemplative, romantic, adventurous fairy tale.

Lacking any internal sense of control, he is desperate to defy fate. Naoufel’s life has felt like a crash course headed toward disaster, and he hopes that being drastically spontaneous will help him escape. Maybe he can learn to be like a fly, always moving just fast enough to escape being swatted. (Other than fate, a recurring fly is the closest thing the film has to a villain.)

This Netflix-distributed movie stands out against the other Oscar nominees in the Animated Feature Film category—for starters, it’s rated TV-MA in a category dominated by the goofy, kid-friendly heartwarmers that Pixar and Dreamworks are known for. The film wants to be taken seriously, as if to say to the Academy: I belong in the Best Picture category, not Animated Feature Film.

Certain animation techniques recreate the effects of a live-action film. The film mimics the effect of a camera through depth of field, frames where raindrops seem to collide with the “lens” and an imitation of a long exposure shot tracing the stars’ movement in the sky.

“I Lost My Body” is not for the squeamish. But if viewers are willing to take a deeper look at the unsettling images from this adult cousin of “Toy Story” (to which it pays homage in one scene), they will find a morbid beauty and some of the most visually striking images of the year. For example, the animation solves the puzzle of how to make a disembodied hand emote just like a face.

Light is one of the most important and possibly most difficult techniques to get right in an animated film, yet some of the most powerful scenes in “I Lost My Body” are amplified by its lighting. One chill-inducing scene involves the hand warding off some subway rats with a lighter, recalling, at a smaller scale, a torch warding off life-threatening wolves.

Though the film is not explicitly religious, the protagonist’s difficulty reconciling loss with a cosmic plan resonates as an exploration of the problem of evil. Why would a loving God allow suffering to happen?

Your Catholic guide to the 2020 Oscars
Jesuitical

A painful tension fills the scenes leading up to disaster, which is teased throughout the film, and even when the nonlinear structure of the film gives away some of the plot, the film tricks the viewer into thinking maybe he’ll make it out. This amplifies the tension between Naoufel’s dreams and fate, which Naoufel laments throughout. That the loss of his parents was inevitable and seemingly intended is difficult to accept. Greta Gerwig’s “Little Women” gives death a similarly nonlinear treatment, and one line from Jo March might as well have been spoken by Naoufel: “God hasn’t met my will.”

The film uses color to express hope through suffering. Against the muted tones of the streets of Paris, a few vibrant symbols of hope stand out: a red crane on the skyline; a young woman’s fluorescent pink and green headphones in the crowd; a red “record” button against the tan play buttons on a tape recorder. Multiple scenes in the film teach Naoufel (or his hand) how to take a leap of faith in the direction of that colorful hope, and sometimes that leap is a literal one. Before the climax of the film, Naoufel sits in his bed, listening to a tape recorder he had as a kid that happened to be recording during his parent’s car crash. He must choose either to keep pressing rewind on the past or hit “record” and move forward.

The film masterfully weaves together a sense of both brokenness and wholeness, distance and togetherness. This is especially true in the final scene. After taking a leap of faith, Naoufel looks out on the horizon. A far-off building with the words “JE SUIS LA” (I am here) in graffiti from an earlier scene is placed where Naoufel’s missing hand would be in the frame. It is a satisfying wrap-up to the isolation Naoufel experiences throughout the film. The hope of reunification with loved ones after death sits on the horizon, out of reach only for the moment.

@sikemeaymseay@americamedia.org
Show Comments ()
Join the conversation: Login or create an account
Before you can comment, you need to update your profile to include your first and last name, as required in our comments policy. Then reload this page and you'll be set up for commenting. Update your profile
Show Comments ()
Comments are automatically closed two weeks after an article's initial publication. See our comments policy for more.