Greta Gerwig shows us ‘Little Women’ like never before 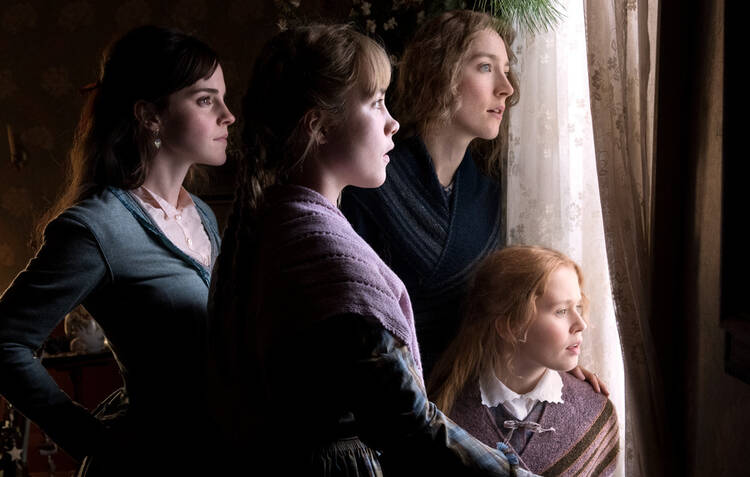 Greta Gerwig loves the book Little Women. You know this in your bones when you watch her new film adaptation of Louisa May Alcott’s classic 19th century novel.To accomplish the Herculean effort of creating a “Little Women” that is both a wildly innovative take for modern audiences and deeply true to the beloved characters, you have to love this story. Luckily for us, Gerwig does, and her exploration of the four March sisters’ tale is nothing short of a masterpiece.

Little Women is having a bit of a moment. When it was announced that Gerwig, the writer and director of “Lady Bird,” would be releasing yet another movie adaptation of the novel (new versions were released in 2017 and 2018) I admit to wondering if yet another new “Little Women” was necessary. Oh me of little faith! This star-studded production succeeds where others have failed.

The cast sparkles with Saoirse Ronan (Jo), Timothée Chalamet (Laurie) and Florence Pugh (Amy) stealing the show. The whole production is infused with a vibrant energy—save for Emma Watson’s ho-hum depiction of oldest sister Meg March. The music and cinematography are stunning and the attention to detail with every costume and set is meticulous. The film manages to be both breathtakingly new yet as cozy as your favorite afghan. Each frame is composed like a painting and yet the cast’s interactions of rough housing, bickering and hair tousling are so natural and intimate that it is like watching a pile of Beth’s kittens or memories of your cousins on Christmas morning.

Gerwig’s “Little Women” is not a rehash of previous adaptations, but neither is it a clumsy, heavy-handed modernization. Even my fellow Little Women purists will agree that the tale is in capable hands. It features creative storytelling and even a different ending for Jo, but every liberty taken with the story is thoughtful. Despite (and even because of) controversial directorial choices, the whole production is anchored in a deep respect for the original text and author. Far from ruining a beloved story, all of the brave changes work to draw out the complexities present in the novel and in Louisa May Alcott’s life experiences.

Viewers will immediately notice that the story is relayed out of order. We are thrown smackdab into bustling New York City with Jo’s attempts at making a living as a writer. We meet each of the four sisters not as children piled around Marmee but as grown women leading separate lives. Amy is in Europe, Meg is already married, and Beth is still in the nest. The story is then told through flashbacks—a bold move on Gerwig’s part that pays off beautifully. Jumping around in the story allows this film to highlight themes that are unexplored in other adaptations without ignoring the classic and nostalgic scenes of the March sisters’ childhood. This unusual style of storytelling feels like a mystery that is slowly being revealed, a tapestry that is being woven together for the viewer.

Gerwig’s “Little Women” is not a rehash of previous adaptations, but neither is it a clumsy, heavy-handed modernization.

By beginning near the end, this adaptation also achieves what no other Little Women film has in brilliantly solving what I like to call “The Amy Problem.” By introducing Laurie with grown up Amy first,Gerwig presents the youngest March sister not as the annoying, selfish child who is always second to Jo, but as the strong and fascinating woman she becomes. Amy’s commitment to speak with brutal honesty is necessary for Laurie to develop from self-centered boy to man. We can finally see their romance as a relationship of mutual respect and not a consolation prize. While other adaptations failed to develop Amy beyond girlhood (leading to confusion and dissatisfaction for viewers when Laurie marries her), Florence Pugh and Timothée Chalamet are given the time to do justice to Amy and Laurie’s relationship.

Gerwig’s “Little Women” transcends a coming-of-age story and dives into the experience of womanhood. It asks: what does it mean to be a woman, a sister, an artist, a mother, a wife? Rather than inserting heavy-handed and anachronistic 21st century feminism into a period piece, this film draws out the 19th century woman’s challenges already present in the text and Louisa May Alcott’s life in a way that will resonate with modern audiences. While a significant portion of the dialogue is word-for-word from the book, Gerwig’s March sisters remind the viewer of the very real difficulties young women without fortunes faced in 19th-century New England. But rather than becoming mouthpieces for Gerwig or 21st century women, one gets the sense that Gerwig’s little women are speaking for Louisa May Alcott herself.

And now for the most controversial change: the ending. Gerwig elegantly conflates the end of Jo’s story with Alcott’s real life experiences. By drawing on the pressure Alcott faced from readers and publishers to wrap up Jo’s story with a nuptial bow, Gerwig presents Jo/Louisa fighting for her characters in her editor’s office and finally agreeing to write the ending he expects.

The viewer gets to watch the “under the umbrella” scene of Professor Bhaer’s proposal to Jo with the sense that it is only happening to the Jo in the book, not in her real life. We then watch Jo (or perhaps Alcott herself) eagerly observing the printing of Little Women while the final picnic scene in her book plays out at Plumfield. While this new ending lacks a satisfying romantic finish, it forces the viewer to consider whether Jo’s marriage to Bhaer was satisfying to begin with.

Louisa May Alcott’s experience as a woman and author is emphasized and brought to the viewer’s attention at the very first moment of the film with her quote: “I had lots of troubles; so I write jolly tales.” Lovers of the novel may hate the ending, but Gerwig has clearly done her homework and studied Alcott’s letters: She is revealing what was very likely the ending Alcott would have preferred.

But despite the unconventional ending, the film elevates rather than dismisses the domestic realm. Marmee’s wise guidance and the home she has built is presented with beauty and awe. There is a lovely moment when Laurie is introduced to the family’s home life and the lonely orphan watches the joyful domestic chaos with longing and wonder. He is like a weary pilgrim who has finally come home. On the day of her wedding, maternal and domestically-inclined Meg reminds Jo that “just because my dreams aren’t the same as yours doesn’t make them unimportant.” And when Jo assumes that her book about their lives will not be of interest because it centers on women’s home life, Amy reflects that sharing stories about domestic life reveal that those experiences matter.

By adapting this women-centered story into an unforgettable film, Greta Gerwig does what Jo’s character and what Louisa May Alcott herself accomplished: sharing a story about women that reminds the world of the depth of women’s lives and their extraordinary and unique experiences. By uncovering what was always there, Gerwig helps us see the March sisters as if for the first time.

Haley Stewart is a beekeeper’s wife, mother of four, speaker and author of The Grace of Enough: Pursuing Less and Living More in a Throwaway Culture. She blogs at Carrots for Michaelmas and co-hosts the Fountains of Carrots Podcast.

@HaleyCarrots
Show Comments ()
Join the conversation: Login or create an account
Before you can comment, you need to update your profile to include your first and last name, as required in our comments policy. Then reload this page and you'll be set up for commenting. Update your profile
Show Comments ()
Comments are automatically closed two weeks after an article's initial publication. See our comments policy for more.