“Miracle in Rwanda” displays the power of forgiveness even after genocide 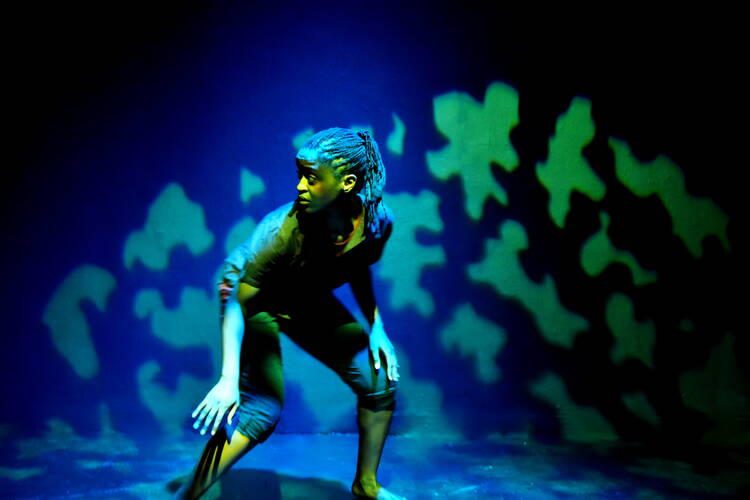 I didn’t know much about the genocide that took place in Rwanda in 1994. I knew some things, of course, one of them being that it was a horrific stain on not only African but world history. Beyond that I knew little of the details, only fragments presented to me by the media, glimpses of obscured images, small data points removed from their context and meaning.

“Miracle In Rwanda,” the one-person play opening off-Broadway at the Lion Theater in New York City on April 9, is about much more than just the details of this dark epoch of Rwandan history. It is a play about Immaculée Ilibagiza, a 24-year-old woman who hid in a tiny bathroom with seven other women for 91 days, surviving the unprecedented onslaught of rape and murder that overcame the country in the spring of 1994.

The Hutu Interahamwe militia and Hutu civilians decimated the Tutsi population and their supporters. (The topic of what happened during the genocide is so sensitive and inflammatory that even its precise wording is an issue. The UN officially describes it as the 1994 genocide against the Tutsi in Rwanda). While these murders went on, Immaculée survived by praying the rosary incessantly. She finally overcame her inability to forgive her family’s murderers through a spiritual transformation that can only be described as miraculous: she found peace in herself without any of her external circumstances changing.

“Miracle in Rwanda” was originally developed and performed by the New York actress Leslie Malaika Lewis. It is based on the book Left to Tell, written by Immaculée about her real life experience. The production in New York will take place on the 25th anniversary of the genocide, this time performed by the actress Malaika Uwamahoro, a Fordham University graduate and native of Rwanda. The play is directed by George Drance, S.J.

Immaculée Ilibagiza, a 24-year-old woman hid in a tiny bathroom with seven other women for 91 days.

I sat down with Leslie Malaika Lewis at a rehearsal studio in New York to discuss the new production of the play opening in April. Our conversation has been slightly edited for length and clarity.

How did you first come upon Immaculée Ilibagiza’s story?

After graduating from UCLA for acting I was looking for material to create a one-person show. Whenever I went into a bookstore and saw a book with a cover of someone who kind of looked like me I would pick it up and read it and see if it was something that I could adapt in some way. With Immaculée’s story, I was in Florida for a conference and [the inspirational speaker and author] Wayne Dyer brought her on to tell her story—this was before her book was published. I heard her say that when the killers arrived (she could hear them while in hiding) she felt so much fear that it made pain in her body and she realized that her thoughts would kill her before the killers ever did. And that’s when she made this decision to pray the rosary every moment of the day that she was awake, from 6 a.m. in the morning to 9 p.m. at night. Then she’d know that her mind was on God and not the killers and not the evil that was happening all around. I can’t relate to living through a genocide—that’s unimaginable. But I can relate to having thoughts that feel so painful that it feels like my thoughts are attacking me. And so to see that she’d found a way out of that was a story that I wanted to tell.

She realized that her thoughts would kill her before the killers ever did.

Tell me more about how Immaculée prayed the rosary and how it enters the play?

Praying the rosary was her ticket out of hell. She used each mystery to heal herself. The play is structured around the rosary, five of the sorrowful mysteries and two of the glorious mysteries. She used the structure of the rosary first to keep her mind focused on something, by the actual words themselves occupying her mind, but she was also thinking about the life of Jesus. “Lord, take this cup from me if it is your will, but not my will Lord but thine.” That gave her solace. She used this connection to heal herself. To make sense of what she was going through.

Much of the play revolves around forgiveness. Can you talk about this?

One of our taglines for marketing the show is “The miracle is forgiveness.” Really, it should be “the miracle is within.” Because what she did, while she was in that bathroom praying, she touched on the core divinity of every human being, the “indwelling Christ presence” is what I’ve heard it called. And when [we are] aligned with that we can’t hate anyone. It’s not forgiveness, exactly; it’s really that when we see things with the eyes of Christ—the eyes of the divine—we can’t hold on to hatred. She made that room into a monk’s cell. She was in there for 91 days and she prayed almost all the time. It wasn’t just a mental exercise. She had visions while she was in there. That was a gift from God to pull her through hell. Because she knew that there was something on the other side, that there was a plan for her life.

While she was in that bathroom praying, she touched on the core divinity of every human being, the “indwelling Christ presence.”

Can you talk about the process of developing the play?

In 2006, with my director, Edward Vilga, we did something in his living room in a loft in Chinatown for 6 people, including [the playwright] Terrence McNally. February 2007 was the official opening. The first 21 shows were entirely improvised within a structure. It was kind of like finding the story. So much was in me from listening to Immaculée and speaking with her. I was finding the story through these live performances. It was a discovery every night. Immaculée came down to Florida to see the three performances there and then the rest were done in NYC. My director videoed one of the performances and then we transcribed it and edited it.

And now you are passing the baton to Malaika Uwamahoro?

I am so excited about this new iteration, it is amazing. I’ve done this show for 12 years, the last time I performed it was in 2017. That’s amazing. It’s taken me all over the world. I’ve performed it on five continents—six, depending on how you count Costa Rica. It had a life of its own because [Immaculée’s] life is so compelling. Because she gets at something that’s very core about being human. It just carried me. It’s been an incredible gift. And now for it to live on is really amazing. Malaika, who is taking over the show, is Rwandan. She brings something to it that I could never bring to it. I am not Rwandan. Her family left Rwanda in 1959 for Uganda, so she was not there during the genocide in ‘94. But she remembers it, she was alive.

Why should this play be seen?

The reason why I think this story is so powerful is because it speaks to what’s at the core of every human being, regardless of what our religion is. We want to believe in the goodness that’s at our core, the core of every person. Even though painful things happen and are happening, what this story teaches is that there is a way to find the good within. And that can translate into good things on the outside. Immaculée is living an extraordinary life now, even though her entire family that was in Rwanda at that time was killed. She has found new family, she has created her own family, she has found solace in a new country. It hurt to hate, it was physically painful for her.

You can’t live with that kind of pain, if you can’t move, if you are trapped in a three-by-four foot bathroom. She changed that pain by changing the thoughts that she was thinking. She was not able to get out of the room, but she could get out of the prison in her mind.

Previews for “Miracle in Rwanda” begin on April 5 and the play runs through May 11.