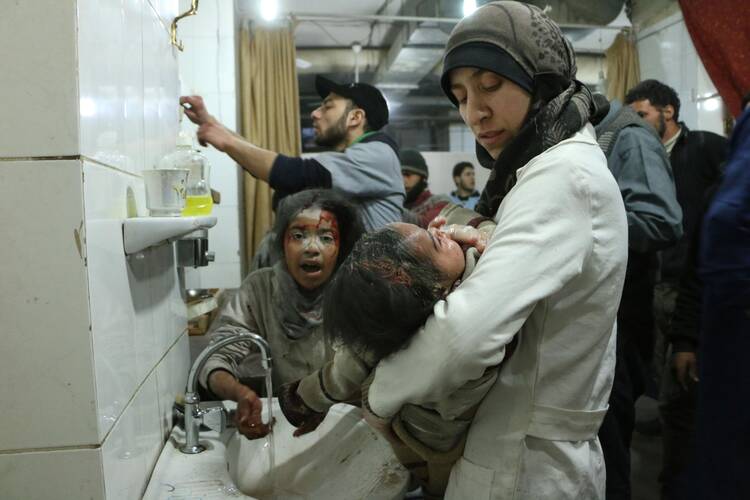 ’The Cave’ is a portrait of courage under fire, resilience and hope (photo: National Geographic).

The mercy, mystery and even the wrath of God are invoked during “The Cave,” the director Feras Fayyad’s valiant misfire of a movie about a hospital that operated in—or rather under—besieged Syria, until being overrun last year. Cries of “Oh God! Oh God! Oh God!” greet the commencement of the daily bombings. “God, are you really watching my children?!” moans the father of numerous wounded. “Damn you, Bashar,” spits a member of the staff, referring to Bashar al-Assad, the president of Syria who has waged a yearslong war on his own citizens—with, of course, the help of Vladimir Putin. God is part of “The Cave.” So is guilt.

“The Cave” is also something of a talking-dog movie: You’re astounded it exists, never mind what it has to say.

A portrait of courage under fire, resilience and hope—how else could they do what they do what they do?—“The Cave” is also something of a talking-dog movie: You’re astounded it exists, never mind what it has to say. As Fayyad’s trio of intrepid cinematographers (Muhammed Kahir Al Shami, Ammar Suleiman and Mohammed Eyad) scour the tunnels beneath Eastern al-Ghouta, a viewer might forget that alongside the humans saving lives there were also humans recording them, for audiences who—one hopes—will be reminded of the atrocities being committed in an area near Damascus that is all but cut off from the world.

The Syrian director Fayyad, best known for the justly celebrated “Last Men in Aleppo,” was apparently not in the “Cave” when his film was being shot, which would not matter if the results didn’t feel both awkward and unfair—at least to the woman around whom he builds the film. Dr. Amani Ballour, a pediatrician, is the elected manager of the Cave, a labyrinthine hospital that operates underground, and the obvious heroine of the piece. What she does is remarkable, as are the operations performed by her surgical colleague Dr. Samir, who revels in the classical music crackling out of his cellphone as he sews people back together, and the general maintenance and cooking of the woman named Samaher, who feeds 150 people with the equivalent of a camper stove.

“The Cave” portrays a miraculous oasis in a hellish landscape.

But the effort to make the movie about Ballour’s emotional reaction to what she sees around her—or, worse, using “The Cave” as a forum about sexism in the Middle East—trivializes both subjects when juxtaposed with the life-and-death struggle that “The Cave” is all about. There is an urgency and immediacy to much of the film, but the poetic voice-overs by Ballour seem, in contrast, trite. The mute-yet-soulful asides of Amani surveying the destruction around her are silly; the equilibrium is ultimately off. Yes, there are pressing social issues to be dealt with in the world, and Ballour’s life has not gone the way she planned. But hey—there’s a child bleeding to death in a corner. And an abattoir outside.

Dubious story structure aside, “The Cave” portrays a miraculous oasis in a hellish landscape. It documents a gesture of compassion, and even godliness, amid pointless violence, destruction and a situation that human rights organizations—including Amnesty International and the United Nations—have declared a crime against humanity. The grace of someone like Dr. Ballour and her colleagues is unquestioned, endlessly valuable and deserving of all the recognition in the world. What it is not is banal. Which is what “The Cave” comes dangerously close to making it.