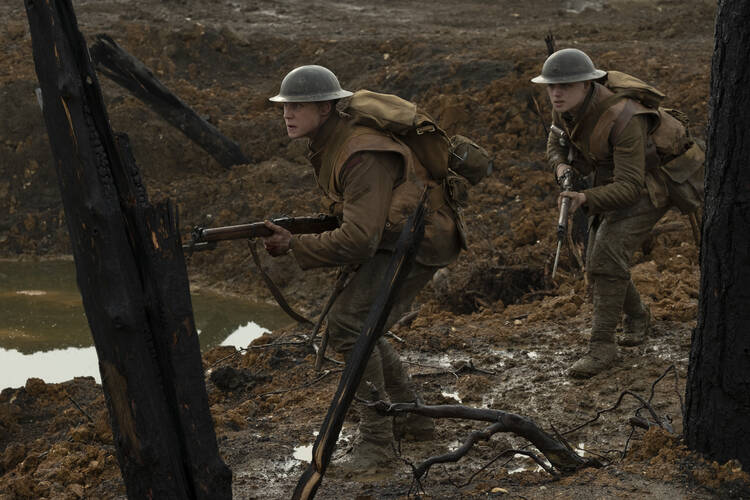 It was one of the more surprising moments I’ve had in a movie theater in recent memory. As the final shot of “1917,” directed by Sam Mendes, faded and the end credits rolled, the packed audience maintained a respectful silence and began gathering their things as the first few names scrolled past. Then, as I began to put my coat on, the crowd stopped for a moment and reacted audibly and reverentially when the cinematographer’s name, Roger Deakins, finally appeared.

“Have audiences become that knowledgeable and specialized?” I thought to myself. To be fair, I was at a preview performance with other critics, but then again Deakins is hardly anyone’s idea of just another director of photography. He has earned 14 Oscar nominations since his work on “Shawshank Redemption” in 1995, and his resume includes “Dead Man Walking,” “A Beautiful Mind,” “Doubt,” “Blade Runner 2049” and nearly every Coen Brothers movie since 1991. His considerable reputation precedes him but “1917” showcases his masterful technical skills put in the service of Mendes’ highly original form of storytelling.

Echoes of “Saving Private Ryan” and “Apocalypse Now” are evident, but “1917” has a sense of relentlessness and time that is unique.

Set against the backdrop of the horrific trench warfare in northeastern France during World War I, Mendes tells the story of two young British soldiers—Lance Corporal Schofield (George MacKay) and Lance Corporal Blake (Dean-Charles Chapman)—who are on what amounts to an impossible mission. They are ordered to cross into enemy territory to deliver a message that could save 1,600 fellow soldiers—Blake’s older brother among them—who are about to be ambushed the next morning.

Echoes of “Saving Private Ryan,” “Apocalypse Now” and other classic war films are evident, but “1917” has a sense of relentlessness and time that is unique. Mendes’s vision was to shoot the entire movie in what appears to be one continuous, uninterrupted shot in real time from beginning to end. We aren’t permitted to look away from these two young soldiers during the film. The camera follows them from a quiet meadow where they are resting down into the muddy trenches where they receive their orders. Then back through the trenches amid mayhem and the scattered bodies of dead soldiers to make their way onto no man’s land, a bombed out stretch of earth 250 yards wide between the British and German lines.

Their trip through hell is epic in scope but powerfully human and intimate in scale.

The viewer is several minutes into “1917” before becoming aware of a pacing and rhythm that is building. “I wanted an audience to take every step of the journey with them, to breathe every breath,” Mendes said. In order to capture that Mendes and Deakins spent four months in rehearsals blocking out the scenes. It required measuring out the actual number of steps the actors needed to take during scenes and then coordinating their journey and dialogue with the camera moves that needed to happen. Ultimately the filming was done in a series of extended, uncut takes that were then seamlessly connected to look and feel as if it is one continuous shot.

In lesser hands this approach could feel gimmicky, but Mendes and Deakins never allow their technique to overwhelm the story they are telling. The continuous action isn’t distracting or frenetic but instead imbues “1917” with a deeply human dimension.

The First World War was a brutal and futile war of attrition that took place over a relatively small area of land. Progress—if it could be called that—was measured in feet and yards instead of miles. Schofield and Blake’s journey is a 12-hour mission on foot compressed into a two-hour real-time film through a plot device I won’t spoil for you here.

Their trip through hell is epic in scope but powerfully human and intimate in scale. The nightmare landscape of rat-infested death we travel through with them is not endured for the purpose of winning a war or confronting an enemy but simply getting a message through. Mendes’s tale—inspired by his grandfather’s fragmentary stories about being a messenger during the First World War—eschews heavy narrative for its own visual poetry, verse and song. In a sense, “1917” is more of a modern epic poem than a war film. Schofield and Blake are Mendes’ Dante and Virgil. Befitting our post-modern age, however, the heroic deeds “1917” extols have more to do with endurance and terror than glory and courage in battle.

True to form, their desperate odyssey pauses only briefly to indulge in either poetic verse or song. In the first instance, Schofield encounters a young woman hiding in a basement and taking care of an abandoned infant. After giving the girl his canteen filled with milk for the child he prepares to move on. But before leaving, he looks at the child and recites several verses of Edward Lear’s “The Jumblies.”

In a Sieve they went to sea! And when the Sieve turned round and round, And every one cried, ‘You’ll all be drowned!’ They called aloud, ‘Our Sieve ain’t big, But we don't care a button! we don't care a fig! In a Sieve we'll go to sea!

In the midst of this inferno, the only thing he can give the young woman and infant, beyond milk, is a child’s nonsense poem offered up like a prayer.

As he nears the end of the journey at dawn, he hears a mournful angelic song emanating from the forest.

I am a poor wayfaring stranger Traveling through this world of woe. And there’s no sickness, no toil or danger In that fair land to which I go.

He follows the voice to its origin and comes upon a battalion listening to a lone choirboy soldier sing the folk/gospel song “Poor Wayfaring Stranger” before heading out on what will be a suicide mission. Exhausted, Schofield sits and listens for a while before moving on.

@billmcgarveybillmcgarvey@gmail.com
Show Comments ()
Join the conversation: Login or create an account
Before you can comment, you need to update your profile to include your first and last name, as required in our comments policy. Then reload this page and you'll be set up for commenting. Update your profile
Show Comments ()
Comments are automatically closed two weeks after an article's initial publication. See our comments policy for more.