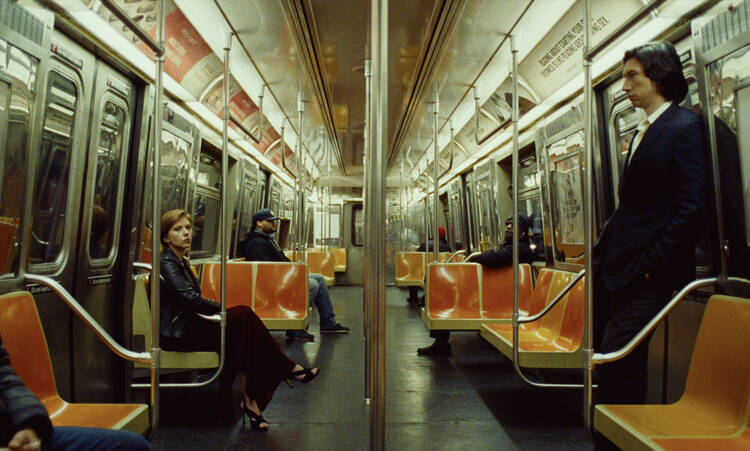 ‘Marriage Story’ stars Adam Driver along with Scarlett Johansson. He is a director named Charlie, she is an actress named Nicole (photo: Netflix).

Noah Baumbach’s remarkably scripted and spectacularly acted “Marriage Story” might just as well have been called “End of a Marriage Story.” It might also be a great movie I never want to see again, though it is too early to tell: Its nuclear-family fallout has not quite settled.

“Marriage Story” makes observations that are probably priceless in a world where divorce has become so common that it is quite a bit like death: It happens every day. It goes virtually unnoticed by the people who are not directly affected. It lays waste to the ones who are.

Noah Baumbach’s remarkably scripted new film might just as well have been called “End of a Marriage Story.”

With a score by Randy Newman and supporting cast that includes Wallace Shawn, Brooke Bloom, Alan Alda and Julie Hagerty, the film also includes a lot of what might be called unbecoming conduct. (“The system rewards bad behavior,” says the shark-like lawyer Nora Fanshaw, played by force-of-nature Laura Dern.) It also stars movie man of the moment Adam Driver, along with Scarlett Johansson. He is a director named Charlie, she is an actress named Nicole, and both are parents to Henry (Azhy Robertson), who is, appropriately, uncharming: A child whose parents are splitting up should not have to be Justin Henry in “Kramer vs. Kramer” (a film with obvious parallels) to earn our sympathy.

Few of the characters go morally unscathed in what is a sometimes harrowing trip to family court. One who does is Bert (played by Alda), the slightly doddering attorney whom Charlie first hires. He is given the film’s best line: “Criminal lawyers see bad people at their best; divorce lawyers see good people at their worst.” Among the points that Baumbach is making—especially by having performers play performers—is that life is an act, and the poor player who struts and frets his hour upon the stage often does so shoehorned into unfamiliar and even hostile parts.

Few of the characters go morally unscathed in what is a sometimes harrowing trip to family court.

Nicole, for instance, has decided that being a wife to Charlie has finally meant sacrificing too much of herself. Charlie, though temperamentally inclined to a degree of self-doubt, thought he was doing O.K. Both are equally wrong. They resist falling into the pit of recriminations and legalistic dirty pool as long as they can. But they have attorneys, so they are lost.

Charlie eventually ends up with Jay, a more or less stereotypical courtroom carnivore played by a very persuasive Ray Liotta. Nicole’s lawyer, Nora, who is a stand-in for the devil, resorts to socio-religious arguments in getting Nicole to embrace her more ruthless instincts and present herself to the court as squeaky clean and righteously maternal. After all, Nora says, the standard by which women are judged within “our Judeo-Christian whatever” is based on the Virgin Mary. “She’s a virgin who gives birth,” sputters Nora, who, prolonging the metaphor, says, “God is the father and God doesn’t show up.” Meaning that men get away with everything.

The way viewers read “Marriage Story” may well come down to what sex they are.

Charlie does not seem able to get away with anything. He is no angel, but he wins our sympathy. At least I think he does. The way viewers read “Marriage Story” may well come down to what sex they are and what their romantic-marital-legal experience has been. Both Driver and Johansson give epic performances. She has what felt like an uninterrupted, 10-or-so-minute scene at the film’s beginning during which Nicole explains her plight. It feels, to some degree, like an improvisation at the Actors Studio, but that is the point. She is an actress who commits herself to a role, and the role she has now chosen is divorcée. Charlie, given an emotionally naked portrayal by Driver, is less able to hide, though both should, occasionally. There is a scene toward the end of the film in which Charlie and Nicole have an understandable but nevertheless embarrassing meltdown that will have audiences feeling like intruders. “Whew,” I said to myself. “This is a movie, isn’t it?”

Baumbach’s own divorce from the actress Jennifer Jason Leigh may have inspired this film, and this is only worth mentioning because “Marriage Story” so profoundly feels sprung from someone’s real-life experience. At the same time, we are keenly aware that people are acting—and always are. The double-montage introduction, which serves as a flashback to the blissful years of being “Charlie and Nicole,” partners in both work and life, is pure Woody Allen, with idealized New York people tossing about bon mots and only doing significant work, when they do work, their comings and going executed with perfect timing. The whole thing smacks of one of those New York Times Style features—one of which is actually framed on a wall, about Charlie and Nicole, headlined “Scenes from a Marriage.”

The Bergman film of the same name was a big influence on Allen, and Allen is an influence on Baumbach. “Marriage Story” might have been the nightmare sequel to “Annie Hall,” if Annie and Alvy Singer weren’t old enough now to be Charlie and Nicole’s grandparents (and had actually gotten married). At the risk of prolonging the literary allusion above, “Marriage Story” is full of sound and fury, signifying nothing short of a reappraisal of marriage and divorce and the casualness with which both are entered into. It also suggests, without saying so, that when one applies for a marriage license there ought to be a test.