‘Judy’ review: A film about love, sadness and Hollywood 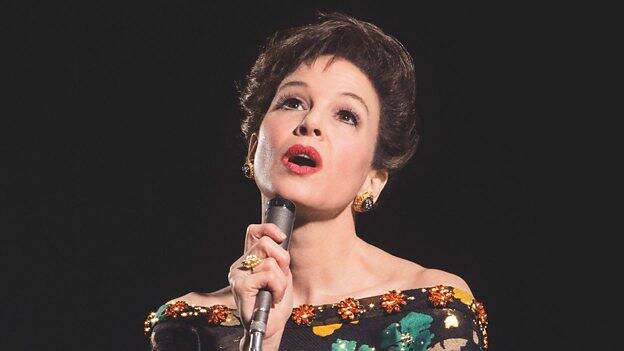 In “All About Eve,” the less-than-endearing title character explains her Machiavellian motives for getting on stage. “If nothing else there’s applause… like waves of love pouring over the footlights.” In “Judy,” the utterly endearing Judy Garland—birdlike, brittle, addicted to pills and booze—is also a junkie for the standing O. “I’m gonna love you/ Like nobody’s loved you/ Come rain or come shine,” she sings to—and at—a London audience in 1969. And virtually dares them not to return the affection.

Directed by Rupert Goold and adapted by Tom Edge from the Peter Quilter play “The End of the Rainbow” (which took place entirely in Garland’s hotel room), “Judy” might have been a standard portrait of doom, a parable about the evils and excesses of studio-era Hollywood, the story of yet another innocent sacrificed on the cross of celebrity—although along those lines, the Garland story is something singular. So is Renée Zellweger’s performance, which makes a sad story elevated, elevating and all about love.

“I want what everybody wants,” she tells a pushy London chat-show host. “I just seem to have a harder time getting it.” What she wanted, of course, was a stable life, romance, a family that stayed together. What she settled for was adulation.

But while Zellweger’s portrayal of Garland may well put her in the Oscar race by virtue of its novelty and reverse “Raging Bull”-ishness, it’s also an immersive, emotionally authentic thing.

Every year at this time, it seems that some actor whom we’ve come to know as one kind of thing becomes an entirely other kind of thing—transformed, newly intense and remade in the makeup chair. That this happens at awards season hardly seems a coincidence. But while Zellweger’s portrayal of Garland may well put her in the Oscar race by virtue of its novelty and reverse “Raging Bull”-ishness, it’s also an immersive, emotionally authentic thing. No one needs to be told that Judy is an alcoholic who doesn’t eat. She moves with the clumsy kind of grace that anticipates falling down; her smile is the smile of someone who grew up feigning one—and the means by which Zellweger mutely explains this aspect of Garland’s character cannot be found in a makeup kit. The musculature of her face is involved; it pops and tenses and flexes in answer and resistance to those forced smiles imposed upon her as an unhappy Hollywood child, terrorized by Louis B. Mayer (Richard Cordery) and browbeaten by a martinet publicist (Lucy Russell). Both are seen in flashbacks with young Judy, played by Darci Shaw.

The film takes place mostly during the five-week engagement Garland played at London’s Talk of the Town in 1969, a gig she didn’t want to take but had to: She was homeless, thanks to tax debt and managerial mismanagement; she had to leave her children, Joey and Lorna Luft, with her ex-husband and former manager Sid Luft (Rufus Sewell) and she was hoping the job would enable her to get her life together. In real life, the engagement was a thorough disaster, in the movie less so: Zellweger, singing in her own voice and eschewing a Garland impersonation, concentrates on capturing her character’s real gift, which was less for singing than for selling a song. Garland wasn’t a great vocalist, despite the hype. But each rendition of every standard is a small drama, acted as much as sung—especially that number, which she finally sings, from that movie about munchkins and witches. It has clearly terrified her from the start of the film. Can she still sing it? It’s one of the anxieties Judy keeps constantly with her, along with her vodka and Seconal.

It’s Zellweger’s movie, of course, and it is in many ways a fantasy.

Surrounding Zellweger is a movie that largely doesn’t quite deserve her but doesn’t get in her way either. Michael Gambon (Dumbledore, for all you kids) is Bernard Delfont, the impresario who gets Judy cheap and lives to rue it; Finn Wittrock is Mickey Deans, Judy’s fifth husband, who serves mostly as a symptom of his wife’s bad judgment; Jessie Buckley is Rosalind Wilder, the young woman assigned to get Judy from here to there, and keep her sober, and fails quite spectacularly.

Review: Not every Christian in Oklahoma is Republican (but it’s close)
John Anderson

It’s Zellweger’s movie, of course, and it is in many ways a fantasy. It’s sacrilege, perhaps, but the actress probably performs the numbers better than Garland did—and maybe in the manner that Judy thought she did, inside her own addled head. The most touching sequence in a very emotional film is her encounter with two gay fans, Dan and Walter (Andy Nyman, Tim Ahern), who have seen every performance and waited at the stage every night. Judy is at such loose ends she asks them to dinner, which—this being a Tuesday after midnight in 1969 London—has to be had at their apartment. “They hound people in this world,” she tells them, after eating scrambled eggs and hearing their stories. “Anybody who’s different.” She then sings a slow, fully felt version of “Get Happy,” with Dan playing the piano, and bursting into tears. He won’t be the only one.