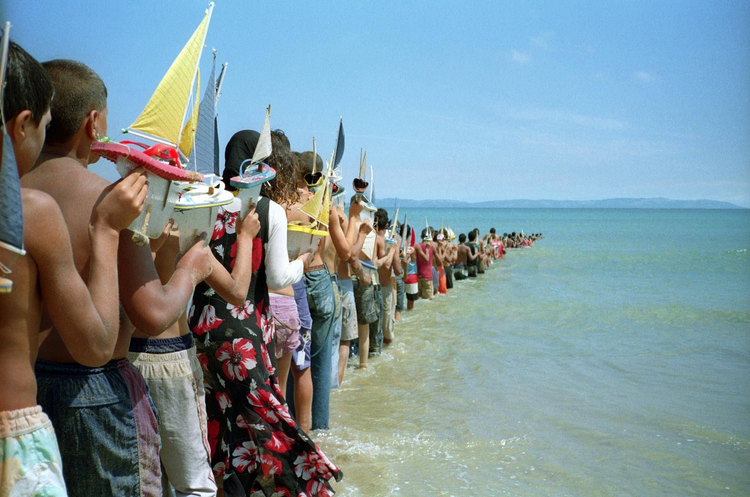 Francis Alys, “Don't Cross the Bridge Before You Get to the River” (2008) (Photo courtesy of the Phillips Collection)

Muhammad, a 13-year-old Syrian boy who is deaf and mute, manages nevertheless to tell us through animated gestures the trauma he suffered while fleeing the Syrian civil war in 2015. In a blue shirt and jeans, barefoot before a plain aqua wall, the handsome child with great dark eyes mimes—and occasionally shrieks—the horrors of his experience, from the most personal hygienic deprivation to the airplanes bombing his former home. The four-minute video by Erkan Özgen—“Wonderland,” as it is heartbreakingly called—renders its audience mute as well.

This was one of the most shattering pieces in “The Warmth of Other Suns: Stories of Global Displacement,” curated by Massimiliano Gioni and Natalie Bell in partnership with the New Museum and on view at The Phillips Collection in Washington, D. C., from June 22 to Sept. 22. Drawing its title from a line of Richard Wright’s that Isabel Wilkerson used in turn as the title for her epic book on the Great Migration, the exhibition featured 75 international artists and included installations, videos, paintings, sculpture and photography. It may well have been the most socially-revelatory exhibition of the year.

At times almost unbearably painful yet then by turns hopeful, the show was a memorable object lesson on how art can awaken us to the unprecedented crisis of refugees and displaced persons now numbering 70.8 million, by far the largest count since World War II. (In Syria alone, 5.6 million people have fled the country since 2011, and a further 6.1 million are internally displaced there.) By recalling—quite admittedly incompletely—earlier chapters of global displacement, the curators also brought depth to the show, challenging memory and imagination to appreciate the crisis today that may seem to be other people’s but is actually very much our own as well.

The show was a memorable object lesson on how art can awaken us to the unprecedented crisis of refugees and displaced persons now numbering 70.8 million.

A series of cover illustrations for the Milanese weekly Domenica del Corriere, for example, documented how Italian immigrants to the United States faced both discrimination and the perils of the sea. (From 1876 to 1976, 26 million Italians emigrated to other countries, almost half the current population of Italy.) Augustus Sherman and Lewis Hine alike showed remarkable sensitivity for the countries and cultures of the immigrants they photographed at Ellis Island. (More than 100 million Americans, about 40% of our population, are thought to have descended from the 12 million immigrants who passed through Ellis Island between 1892 and 1954.)

Nearby was a strong selection of Dorothea Lange’s well-known photographs of Midwestern migrants during the Great Depression. (It is startling that even The Phillips perpetuates the misreading that her iconic “Migrant Mother” (1936) shows “a destitute woman with two children” rather than the three children who are actually in the picture.) In “Trail of Tears” (2005) the inimitable Benny Andrews recalls the devastating forced displacement of Native Americans to Oklahoma from their southeastern homelands in the 1830s. Perhaps most memorable of all, and something like an anchor for the entire show, The Phillips’ share of Jacob Lawrence’s “The Migration Series”—hung, very effectively, salon-style—both documented and dramatized the migration of some six million African Americans who left the Jim Crow South to seek new homes and employment in the North. (The Phillips owns the odd-numbered panels of this 1941 masterwork, and the Museum of Modern Art the even-numbered ones.)

The sea, we realize, is not politically neutral. And many grievous images from the shores of the Mediterranean have all too often shown us the desperation of refugees.

Early in the show John Akomfrah’s three-channel HD video installation masterpiece, “Vertigo Sea” (2015), showed the majesty and power of the sea, human futility in attempts to master it and a breathtaking bath of beauty and blood as marauders pillage its whales and polar bears. An ecological essential, the 43-minute film framed the theme of displacement in its full, ecologically global context.

The sea, we realize, is not politically neutral. And many grievous images from the shores of the Mediterranean have all too often shown us the desperation of refugees. Wolfgang Tillmans’ photo “Lampedusa” (2008) detailed the wreckage of migrant boats piled up on that tiny Italian island. Hanging opposite it, his “The State We’re In” (2015) showed no state but rather an expanse of the Atlantic Ocean where time zones and borders meaninglessly intersect. (The chilly, mysterious photo looks for all the world like a Vija Celmins painting.)

On the floor of the same gallery was Kader Attia’s “La Mer Morte (The Dead Sea)” (2015), an installation of scattered clothing and shoes of people who have disappeared, leaving only their poorest traces behind. And in a neighboring gallery was one of the show’s most beautiful yet also alarming pieces, Francis Alÿs’ video “Don’t Cross the Bridge Before You Get to the River (Strait of Gibraltar, Morocco-Spain)” (2008), in which children from Tangier, Morocco and Tarifa, Spain are shown walking into the sea in single file toward each other to create a human bridge between the two continents, the beauty of their innocent hopefulness surreally combined with the threat of their drowning.

We are again at that point where the very existence of the world community is in peril unless we choose decisively to end the exclusion and persecution of our weakest members.

Closer to home and the southwestern U.S.-Mexican border was work that transcended the distinction between document and drama. The distinguished filmmaker Chantal Akerman (1950-2015) was represented by a lengthy (one hour and 39 minute) video, “From the Other Side” (2002), whose uncompromising style mixed footage of camps and their surveillance with interviews of migrants. “They have stories to tell,” she said mordantly, “unfortunately.” Some images were of a whole community, such as the Mexican photojournalist Guillermo Arias’ aerial view of a caravan of Honduran migrants resting on a basketball court in southern Mexico (2018). Others were lacerating close-ups, as in John Moore’s 2018 World Press photo of the year of a wailing two-year-old child watching her mother being searched at the border.

A terrible beauty—call it the fascination of crucifixion—attended much of this work, including that of Arias, Moore, Alÿs, Lawrence and then certainly Griselda San Martin, whose photographic series “The Wall” (2015-16) studied “Friendship Park,” the one place along the U.S.-Mexico border where families were briefly allowed to spend time together. You sensed a murderous music accompanying the geometric rigor of the slats in the fence and the colorful costumes of people exchanging “pinky kisses” through them.

That fired imagination provides unique access to the world of the displaced was especially evident in the “finest” art in the exhibition. One of El Anatsui’s largest and most opalescent sculptural tapestries, “Dzesi” (2012), seems simply a target-like abstraction—until you realize that it is made of discarded alcohol bottle caps wired together and connoting in multiple ways the waste of colonial exploitation. The four paintings in The Phillips’ beloved Rothko Room, left in their accustomed site in the museum, may evoke, as the wall text suggested, “a kind of mirage or desert horizon that is present but infinitely distant.” But they seem to me in a more primal, not yet conceptualized manner to invite the viewer to simply surrender to immersion in the sensible world. And achingly, Arshile Gorky’s “The Artist and His Mother” (c. 1926-46), borrowed from the National Gallery of Art, immortalizes the horror of the Armenian Genocide (1915-17), during which Gorky’s mother died of starvation in his arms. Based on a 1912 photograph, the painting shows him with dark, down-cast eyes while his mother’s pale face confronts us directly, she a memory and he mourning itself. It is as if Picasso’s late Rose Period skipped Cubism and found itself anew in mystical interiority.

Alas, since so many artists from so many countries were represented in the exhibition, there was no catalog. But there is a “participants” tab on The Phillips’ exhibition page. Watch for more of their work. It will persuade you, as Jason Farago wrote in his New York Times review, that “without exiles and émigrés, there is no modern culture.” Still more broadly relevant are the words of Hannah Arendt in her 1943 essay, “We Refugees”: “The comity of European peoples went to pieces when, and because, it allowed its member [the Jewish people] to be excluded and persecuted.” We are again at that point where the very existence of the world community is in peril unless we choose decisively to end the exclusion and persecution of our weakest members. “The Warmth of Other Suns” was a plea and a prayer for that decision. Amen!

Correction (10/28/19, 2:40pm): This article previously stated the name of the Milanese weekly with cover illustrations of Italian migrants as “Corriere della Sera.” The publication in question was actually Domenica del Corriere, a weekly illustrated supplement of Corriere della Sera. This article also previously stated that the exhibit had been shown at the New Museum in New York. The exhibit was only shown at the Phillips.