Their Eyes Were Watching God: Two new plays set out in search of the divine 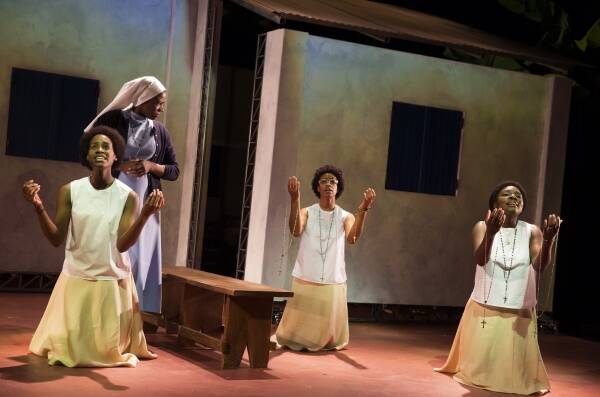 Where are we more likely to encounter the divine: in otherworldly apparitions and miracles, or in selfless service to others? In Lourdes, or at the soup kitchen? To secular and religious liberals, the latter answer has vastly greater appeal, not to mention more practical application: We may not agree about why we’re doing it, but surely we can all gather to chop stew vegetables for the hungry, as do the sad, damaged souls in Heidi Schreck’s new play at Playwrights Horizons, Grand Concourse.

On the other hand, Katori Hall’s Our Lady of Kibeho, another Off-Broadway play on offer just down the street at the Signature Theater, demonstrates that supernatural visions are hard to resist, both as narrative grist and for their sheer spectacle. Whether, from these two plays about two wildly disparate Catholic missions, playgoers of faith can glean any spiritual edification, it is hard to say; mileage may vary. But both are well-crafted and exquisitely realized, and together make a fascinating diptych on Catholic—as well as catholic—themes.

On the surface, “Grand Concourse” is the more accessible and naturalistic of the two. Set in the oddly underpopulated soup kitchen of an unnamed parish in the Bronx, it follows the unglamorous, almost rabidly singleminded ministry of Sister Shelley (Quincy Tyler Bernstine), a middle-aged nun who wouldn’t be caught dead in a habit and who confesses to a wispy young volunteer, Emma (Ismenia Mendes), that she’s having trouble praying. Prayer is something of a third rail for Sister Shelley, it turns out: her halting, earnest attempts to talk to God consist of her setting a microwave timer and struggling to get through a minute of doubtful entreaties. And when Emma asks Sister Shelley for guidance on prayer, the nun curtly advises her to talk to a priest.

This odd-duck sister, a neat freak with the kind of crusty, no-nonsense self-discipline that stands in for zeal, apparently thinks that toiling in the kitchen is the sum total of her religious calling. The play ends up vindicating her caution, as an unpredictable, unduly protracted drama plays out among messed-up young Emma and Oscar (Bobby Moreno), the soup kitchen’s janitor-cum-security detail. Feeding hungry mouths, Sister Shelley learns, is the easy part, while tending to souls—wayward, needy, volatile human souls—is where the real work, and the possibility of profound heartbreak, is. Perversely, the play seems to wind up suggesting that Sister Shelley might at last find peace only when she turns tail and runs from that hard work. It’s probably safe to say that two of playwright Schreck’s cited inspirations for the play, Dorothy Day and Sister Mary Corita Kent, would have been aghast, even if they might have recognized and pitied the impulse to run.

Director Kip Fagan’s production has the you-are-there observational detail that has almost become a Playwrights Horizon house style; Rachel Hauck’s set captures perfectly the burnt-pot, cracked-wooden-spoon milieu familiar to any soup kitchen volunteer. And the cast—which includes Lee Wilkof as Frog, a shambolic ex-hippie and the only hungry customer of the soup kitchen we meet—is consistently fine at navigating the subtly shifting moods of the play. But for all Schreck’s attention to characterological detail, the turns of her plot, especially the final ones, don’t really add up, and “Grand Concourse” provides under-nourishing repast.

If Schreck’s play is gritty and nuanced to a fault, Hall’s "Our Lady of Kibeho" is painted in such bold strokes that it flirts with kitschy cliche, and its vibrant staging by director Michael Greif doesn’t shy away from the material’s seeming primary-color composition. There are the young Marian visionaries, inspired by their real-life Rwandan counterparts, their faces fixed in a beatific stare toward a bright offstage light, while everyone around them marvels and tries vainly to distract them. There are the well-worn arguments among the idealistic young priest eager to believe the visions, the mean old nun who distrusts them, and the craven bishop with happy visions of pilgrims flooding to his tiny parish. There is even the skeptical white priest from the Holy See, who seems to regard the entire continent of Africa as a heathen jungle and whose medical tests of the young visionaries are luridly invasive.

But if much of the play’s first act follows the hoary template of the inquest drama, in which church authority clashes with, and tries to quash, private revelation, something strange, even miraculous happens in the play’s last hour. Quietly unsettling the neat expectations set up by its premise, yet without losing its forward momentum, the play grows curiously meditative, even circumspect, in its consideration of a blessedly unstated but recurrent theodical question, made starkly apparent by the early-1980s Rwandan setting: Why would the Virgin choose to reveal herself to three young girls, even hand them a bloody prophecy of killing fields to come, then go silent, leaving them powerless to prevent the genocide that would engulf their country?

For all its undeniably transfixing magic realism—banana trees shudder, lightning flashes, and I swear there were winds blowing through the theater—the moral universe of “Our Lady of Kibeho” feels alarmingly close to the stark inevitability of Greek tragedy. The three visionaries—Alphonsine (Nneka Okafor), Anathalie (Mandi Masden) and Marie-Claire (Joaquina Kalukango)—are oracles everyone reveres but no one really heeds. And their experience of the divine, like Fatima’s or any number of such cases, is at least as apocalyptic as it is beatific.

Perhaps that’s one reason why, in real life, Bishop Augustin Misago of Gikongoro later authenticated the visions of the “trinity” from Kibeho College. Far from the pilgrimage bait envisioned by the bishop in the play, the girls’ visions confronted bleak truths about human sin, about our distance from God as much as God’s closeness to us—hardly fodder for a comforting devotional, and therefore, the thinking goes, less likely to be fabricated. While Hall’s play ends on an up note, the timeline of real-life events is brutally instructive: The girls’ visions, specifically those seeming to predict the Rwandan genocide, came in 1982. Ten years later, “The Shrine of Our Lady of Sorrows” was erected on the site of the original visions, with the bishop’s approval. It was just two years later, in 1994, that some 1 million Tutsis (and some Hutus) were slaughtered, in 100 notorious days of killing led by the majority Hutu tribe. (It’s worth mentioning, in regards to Kibeho, that it was the site a year later of an apparent retaliatory massacre of thousands of Hutus and other “displaced persons” by the ascendant Tutsi party.)

Bishop Misago’s declaration, affirming the authenticity the original visions, came a full seven years later, in 2001. God may move in mysterious ways; God’s flawed human servants, it seems, move slowly, if they are moved at all.