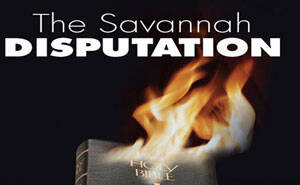 Among the many tectonic political realignments of our historic 2008 elections was the blow they delivered to the once-mighty political muscle of Christian Right—as resounding a rebuke, it could be argued, as the 1980 elections were to the uneasy alliance of New Dealers and New Lefties that was then the Democratic Party (so-called “New Democrats” hadn’t yet been minted).

Still, it would be a mistake to assume that conservative Christians have ceded their place in the public square, or that either their voting power or their cultural influence can be easily dismissed in the age of Obama. Clearly, the president himself hasn’t written off the movement: To varying degrees of liberal chagrin, Obama invited best-selling evangelical pastor Rick Warren to lead his inaugural invocation, and he has no plans to shelve his predecessor’s “faith-based” initiatives. Clearly American Christians, conservative and otherwise, remain essential voices in the national dialogue.

Off-Broadway might be the last place you’d expect to find such average churchgoers represented, let alone portrayed sympathetically, but in fact two shows now playing in New York have Christian faith and institutional authority as central themes; both also happen to feature evangelical Christians as lightning rods for conflict and conversation. And, miracle of miracles, neither is out to score easy points at their expense.

The Vineyard Theatre’s "This Beautiful City" literally began in conversation: Its creators, a New York-based troupe called the Civilians, spent several months in Colorado Springs, Colo., the de facto capital of evangelical Christianity, conducting interviews with believers across a spectrum of intensity and orthodoxy. These interviews have been shaped by members of the Civilians, under director Steven Cosson (who co-wrote the show with Jim Lewis), into an involving patchwork of scenes and songs, in a docu-theater style that owes much to Anna Deavere Smith ("Twilight: Los Angeles," 1992) and Moises Kaufman ("The Laramie Project"). We meet the scrubbed megachurch fundamentalists of New Life Church; the scruffy storefront exorcists at the Revolutionary House of Prayer; a black Baptist church with an unstable compound of reactionary and liberal impulses; a Catholic priest in strategic alliance with evangelicals along political lines; and assorted Springs denizens whose faith ranges from fervent to fair-weather.

The Civilians also spent time with a handful of non-believers who feel increasingly out of place in their own hometown; we hear from an acerbic atheist who runs an alternative newspaper and a conservative Jewish military vet fuming over open Christian proselytizing at nearby Peterson Air Force Base. But, while it’s fair to surmise that the Civilians are personally more sympathetic to these besieged non-believers, these voices of secular reason don’t throw the show off its balance. Indeed, one of the show’s signature spectacles is the disjunction between audience expectations and the show’s evenhandedness: theatergoers seem palpably eager to greet the show’s praise-worship sequences with giggles, but they’re soon hushed into silence by the letter-perfect sincerity of the Civilians’ delivery. I guess that’s why it’s called acting.

What does nearly throw "This Beautiful City" off its game is not a matter of bias but of surplus: Between lengthy, fascinating monologues delivered in direct address by the versatile cast, and the odd, often striking songs composer Michael Friedman has fashioned from some of the interviews, there’s just too much here. A stronger point of view, a more ruthless shaping hand, would have been welcome. Even what must have seemed like theatrical manna at the time—revelations about the secret gay life and drug use of New Life’s charismatic founding pastor, Ted Haggard, exploded into national headlines while the Civilians were busy canvassing the faithful in Colorado Springs—ends up weighting the show with a narrative responsibility it’s spread too thin to fulfill.

The Haggard scandal, and a concurrent Colorado ballot measure opposing gay marriage, also ends up consigning a good deal of the show’s running time to a well-trod culture war over sexual identity and religious authority. It’s true that one of the show’s most affecting monologues, that of a transgender “T-girl” who clings tenaciously to a God others would deny her, might have made it into the show with or without Haggard’s spectacular fall. It’s also likely that she would have stood out all the more if she weren’t yet another case study in the clash of sexuality and religion.

The Civilians do make the most of one remarkable coup, though. A frank, searching interview with Haggard’s adult son, Marcus, offers a hopeful sign that the next generation of evangelicals may have a less rigid, more circumspect worldview, even one that hews closer to the Christian call for renunciation and humility:

So, yeah, with my dad it’s a fall in one sense in that we view glory as being the top and leading a big church and all those things. Sure, tragedy happened there. Flipside is, in my view, my dad’s understanding God for the first time. Because, you know, we believe God is unconditional love. He is the only one who can love us completely for who we are, no matter what we’ve done, and heal us. So I think my dad’s being healed. I think he’s closer to being human now than ever before.

Admittedly, the theology of most of the evangelicals in "This Beautiful City" is made of sterner stuff: spiritual warfare, demons, and a red-hot hell are seldom far from their minds. Belief in a literal hell can be its own hell, though, if you also happen to believe it’s your urgent duty to rescue others from the blaze. This fireproof take on the Great Commission is ostensibly what motivates Melissa (Kellie Overbey), a pretty young blonde, to call on a pair of Catholic spinsters in Evan Smith’s sneakily serious new comedy, "The Savannah Disputation," now at Playwrights’ Horizons. Melissa says she belongs to the Church of the Apostolic Discipline, American Rite, and it’s her gentle insistence to the easily flustered Margaret (Marylouise Burke) that Catholics aren’t really Christians that ignites the play’s action, and leads inexorably to the unlikely climax, the “disputation” of the title: a heated, unsparing debate over scriptural inerrancy and the apostolic succession. How many nights at the theater, let alone religious services, dare to go there?

If meek Margaret is the sort of dear, softheaded believer who hasn’t given her faith much thought, let alone seriously questioned it, her sister Mary (Dana Ivey) is the sort of hardheaded partisan who, though no more thoughtful about her faith, has the poisoned, never-happy overconfidence of the self-righteous. They’re hardly model Catholics, in other words, so they call in backup to refute Melissa’s rote anti-Catholic talking points. In a two-way ambush, they invite over their local priest, Father Murphy (Reed Birney), on the same night as well-meaning, tract-bearing Melissa. Smith, director Walter Bobbie and the top-notch cast make the most of this awkward face-off, as two forced adversaries size each other up amid the banana pudding and slipcovers. At last, Mary spells out for Father Murphy the kind of pastoral care she’s seeking. Gesturing to Melissa, she cries, “We want you to crush her!”

What gives Smith’s play a persistent tug of interest for the non-scholar is not only its rich situational comedy but also its wry, gnomic tone. We’re relatively used to the evenhanded, faintly anthropological way the Civilians treat the faith of their subjects; it’s the sort of tolerant-liberal curiosity some East Coast magazines uses when they set out to explain the exotic byways of flyover country to its readers. Smith’s comedy has none of that do-gooder glow about it, nor is it even clear that he’s out to make sense of his characters’ beliefs for us. What is clear is that he takes them seriously enough to bring them into conflict, but not so seriously that the friction doesn’t also tickle.

If secular or religious liberals thought—hoped, even—that religion might be yesterday’s news after the 2008 elections, or that we might at last have earned a reprieve from all the God talk, the message from stages of the nation’s theater capital is: Don’t believe it.

Rob Weinert-Kendt is an arts journalist based in Brooklyn who has written for The New York Times and TimeOut New York. He writes the blog "The Wicked Stage."