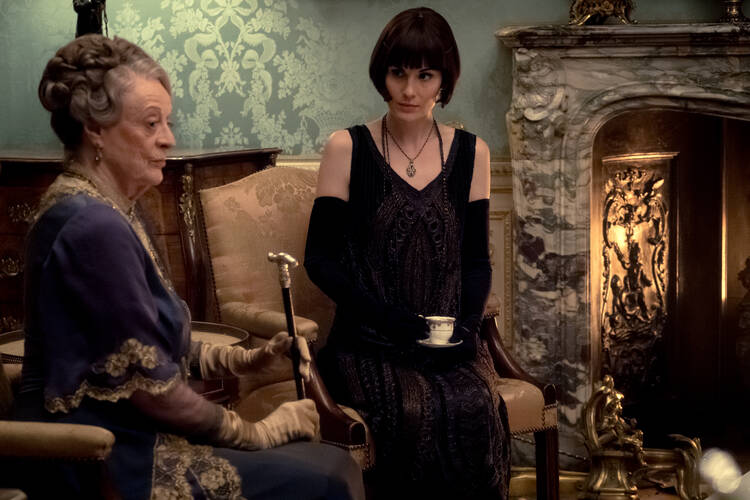 The central subject of many of the great English novels and dramas has been inheritance, from “King Lear” to Brideshead Revisited, from Middlemarch to “Jerusalem.” To whom does the land rightfully belong, and what does the answer to that question say about the state of the nation? This theme also threads, faintly but unmistakably, through the romantic comedies of Jane Austen, as their matchmaking often revolves as much around questions of property as propriety.

The film’s central event—the overnight visit of King George and Queen Mary to Downton—is an occasion less for conflict than for catering.

The British television phenomenon, “Downton Abbey,” which beamed into American living rooms for six seasons and has just been capped with a hit film, now in theaters, initially drew much of its narrative energy from this great national legacy of inheritance anxiety and its corollary tradition of marital machination. The question of who would wed the three daughters of Robert and Cora Crawley, a.k.a. Lord and Lady Grantham, and thereby secure the future of the sprawling Yorkshire estate of the title, drove the show’s eventful first three seasons. It even underpinned a good deal of the series’ “downstairs” drama, as the first season culminated with Lady Grantham’s miscarriage, effected with a bar of soap well placed by a malevolent maid, O’Brien.

Soap of the storytelling kind was always an operative element in the grabby plotting of the series, which did not skimp on storylines revolving around death, sex, religion or class competition. The intrusion of World War I in the second season added some gravitas, as the Crawleys briefly contemplated the prospect that the grounds of their sumptuous castle, pressed into service as a hospital for war wounded, might be better used as a public good.

Soap of the storytelling kind was always an operative element in the grabby plotting of the series.

That heretical notion passed quickly, along with much of the series’ edge of intrigue. My wife and I, early devotees of the show, got off the “Downton” train somewhere in the fourth season, as the romance of one Crawley daughter, Edith (Laura Carmichael), with a flaky journalist foundered, while the other daughter, Mary (Michelle Dockery), juggled two indistinguishable handsome suitors. Meanwhile the conflicts among the servants seemed to have settled down from open warfare to mild misunderstanding. What was left by way of compensation were the lovingly crafted period setting and the pithy one-liners delivered by a crusty dowager aunt (the indelible Maggie Smith).

The new film leans heavily into both of these remaining assets, with Michael Engler’s direction lingering on the architecture and the costumes, and the script, by series conceiver Julian Fellowes, delivering a Whitman’s sampler of tasty Aunt Violet zingers. (Asked if she approves of a correspondence between young lovers, she replies with uncharacteristic approval, “I will lick the stamps myself!”) But the film’s central event—the overnight visit of King George and Queen Mary to Downton—is an occasion less for conflict than for catering. Indeed much of the film’s suspense, such as it is, turns on whether Downton’s beloved servants will get the chance to bow and scrape before the visiting monarchs, who travel with their own entourage. “Is this a revolution?” the indignant chief butler, Carson (Jim Carter), asks as his staff meets in secret to hatch a scheme to strut their stuff. Sure, if you can call a plot to serve royalty a revolution.

The outside world intrudes, just a little, on this idyll.

There is a flicker of inheritance drama in a subplot involving an estranged relation, Lady Bagshaw (Imelda Staunton), though it centers on the fate of another, unseen family estate and involves another woman, her ostensible maid, Lucy (the improbably named Tuppence Middleton). This occasions a few tepid confrontations and raised eyebrows, as do the film’s other ostensible plot elements: Lady Edith’s dissatisfaction with the ambitious schedule of her diplomat husband, Bertie (Harry Haden-Paton), and the loveless marriage of Princess Mary (Kate Phillips). These are all set right, with fairy-tale beneficence, at a culminating royal ball overseen as much by the King and Queen as by the smilingly unperturbed Lord and Lady Grantham (Hugh Bonneville and Elizabeth McGovern). That is the film in a nutshell: much pomp, little circumstance.

‘Brideshead Revisited’ changed my life. Can it work its magic on the ‘Downton Abbey’ generation?
Rob Weinert-Kendt

The outside world intrudes, just a little, on this idyll. There is an assassination subplot, quickly thwarted, whose main point is to demonstrate the patriotism of the family’s loyal Irish in-law, Tom Branson (Allen Leech). And there is a brief tangent involving the young butler Barrow (Rob James-Collier), a closeted gay man whose visit to an underground club is interrupted by a police raid. After another footman bails him out, the two muse hopefully about a more open future.

As for the question of inheritance, the report is mixed: It seems clear that while the posh folks will always retain ownership of a place like Downton Abbey, it belongs as much to the people, the cook and the housekeeper and the valets, who maintain it. It is theirs, that is, as long as they know their place.

Too many SPOILERS for this to be considered a "review" per se.
Best off screen moment so far: Carson correcting the crew for placing a spoon on the wrong side when they appeared on the Today Show last week!

Thought this was a good review with details surrounding the sub plots. This movie doesn't appear to have much of a main plot at all.

I question Rob Weinert-Kendt's qualifications as a reviewer of the film "Downton Abbey" when he doesn't even seem to know who the main characters are. He refers to Lady Violet as the "crusty dowager aunt" when she is the mother of Lord Robert Grantham, the grandmother of Ladies Mary and Edith, and the great-grandmother of little Sybil, George, Marigold, and Caroline. In the very poignant scene toward the end of the movie, Lady Violet tells her granddaughter Lady Mary that she does not have much longer to live. The beautiful love between the two is evident, as Lady Mary repeatedly addresses her as "Granny."