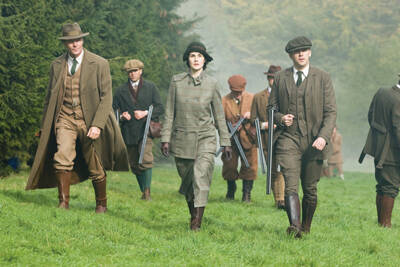 The first words of the first episode of the first season of Downton Abbey, two years ago, were “Oh, my God,” a locution probably not as common in Edwardian England as it is in Obaman America. In this case, though, the words are perfectly appropriate to the news being received by the North Yorkshire telegraph operator we see at work on April 15, 1912, who has just learned of the sinking of the Titanic.

That event was a cataclysm of biblical proportions not just for the 1,517 people lost and the snake-bitten White Star ship line, but for modern Western culture. The ego of progress had been bruised; faith in technology had been ruptured; the unsinkable had sunk. More than a few people, largely among the impoverished and disenfranchised, saw a divine hand behind the iceberg. Among them was the blues singer Blind Willie Johnson, whose song “God Moves on the Water” (“God moves, moves, God moves, ah, and the people had to run and pray”) exuded not glee, exactly, but a certain degree of satisfaction.

Such echoes about the intrinsic inequities and cosmic meaning of wealth, privilege and birthright are precisely what one does not hear in “Downton Abbey,” which recently ended its second season. Nor would one expect to. “Downton Abbey” is a soap opera, albeit one that appeals to people who would never willingly admit to an appetite for soap operas. First aired in the United Kingdom to rave reviews and epic ratings, “Downton” was created by that sly dog Julian Fellowes, best known for the two-tiered class drama “Gosford Park” (2001) and as a screenwriter who knows how to skewer upper-class English hubris to very entertaining effect. Among his credits are the upcoming centenary television series “Titanic,” the 2009 feature film “Young Victoria” and the screenplay to director Mira Nair’s adaptation of “Vanity Fair” (2004), based on William Makepeace Thackeray’s acidic satire of early 19th-century British life. Published in 1848, the book is subtitled “A Novel Without a Hero.” The family at its center is called Crawley. So is the family of “Downton Abbey.” Feel free to draw your own conclusions.

Like much fiction that aspires to the historical, the first two seasons of “Downton Abbey” telescope world history, which we see only as it affects the characters in our immediate vicinity. These are the Crawleys: Robert, the Right Honourable Earl of Grantham (Hugh Bonneville); his American wife, Cora (Elizabeth McGovern), Countess of Grantham; their three daughters, Lady Mary (Michelle Dockery), Lady Edith (Laura Carmichael), Lady Sybil (Jessica Brown-Findlay) and Robert’s mother, Violet, the Dowager Countess (Maggie Smith), who is every “Downton” fan’s favorite font of the politically inappropriate. My favorite Violet line: “What is a weekend?”—accent on the second syllable, emphasis on a lifestyle (before there were “lifestyles”) that never had to acknowledge the existence of a work week, or work.

While the Titanic disaster is leaving its worldwide wake of socio-political/spiritual upheaval, at Downton the sinking feeling has been about money and property. Robert’s cousin James and his son, Patrick, have gone down with the ship. Because of the way the family inheritance is structured, this throws the Crawleys into commotion. Because the heir must be male, and because Cora has “failed” to give birth to a son, cousin Patrick was to inherit both the title and the money, including Cora’s dowry, which has been “entailed” to the estate. To keep things tidy, Patrick was to marry Mary. Then God moved on the water and, in this case, propelled a plotline.

Under all the tradition, pomp and upholstery of “Downton Abbey,” a world is shifting. A war is coming, comes, and then goes; women are flexing their muscles. Despite their seeming contentment, the servant class is not quite as servile as one expects. Although predictable comparisons have been made between “Downton” and the classic “Masterpiece Theater” series “Upstairs/Downstairs,” the intrinsic democracy of “Downton Abbey” diminishes the distinction between upstairs and down—it’s more like everyone is crowded onto a landing. And it is one crowded landing.

Eighteen characters make up the principal population of “Downton Abbey,” a lot of Brits—key to the program’s charm. In order to keep tabs on everyone, rare is the scene that lasts longer than 30 seconds and that doesn’t end with an ever-so-subtle twist. Viewers are kept in constant motion, Ping-Ponging from the romantic entanglements of the Crawley girls to the intrigues below stairs being hatched by Cora’s scheming lady’s maid O’Brien (Siobhan Finneran) and her equally unlikable ally Thomas (Ron James-Collier); then back to the complicated sub-rosa romance between Lady Mary and Matthew Crawley, her cousin and the family’s middle-class heir apparent. Then we ricochet to the stalwart Anna (Joanne Froggatt) and the noble Bates (Brendan Coyle), who got his game leg serving as Lord Grantham’s batman during the Boer War, who marries Anna and is promptly arrested for the murder of his gorgonesque blackmailer of an ex-wife (Maria Doyle Kennedy of “The Tudors”). Around these planets many moons are in orbit, narratives are afoot and anachronisms are creeping: When Bates is arrested, the police Mirandize him, which probably would not have happened for another 50 years.

The soapish aspects of the first two seasons of “Downton” are pronounced: multiple characters, multiple plotlines, ridiculously noble dialogue, equally craven characters, all of which serve not just a nostalgic but perhaps even an atavistic appetite for a world of vicarious luxury upstairs and something close to contentment below. There is an occasional note of Marxist discontent—“Our lot always gets shafted,” says Thomas at one point—but those notes are played by the least likable of characters. Lady Sybil falls for the chauffeur, Tom Branson (Allen Leech), and eventually secures her father’s blessing for her marriage to him, a plotline that seems clichéd even for “Downton Abbey,” which suffered from its transition from first season to second, mostly because all those introductions to characters and story kickoffs contained a natural momentum lost in the second movement.

Perhaps the most remarkable thing about “Downton Abbey,” in terms of structure, is its violent compression of time and, occasionally, space. No moments are wasted in comings and goings; people speak of arriving and—instantly—have arrived. After Matthew and his footman, William, are wounded at the Battle of Amiens in 1918, they suddenly materialize at Downton as if they have just returned from a pub down the block.

Viewers will be curious to see how Fellowes and Co. manage to maintain the pace they have set for themselves with the third season, to begin some time next year. The stories may become more baroque, or time itself may be suspended. Either way, this viewer will be watching.

John Anderson is a film critic for Variety and The Washington Post and a regular contributor to the Arts & Leisure section of The New York Times.

Well, this is what you get when the reviewer writes for Variety, The Washington Post and The New York times. He makes his living being wittily nasty and talking down to the great unwashed.

Let us notice a few things about this series:

Characters that we care about.

A window on history and another time, however historically incorrect. (I like  watching it to see the antique cars!)

Sounds pretty engaging to me and about a zillion other happy viewers.