Remembering the life and poetry of Marie Ponsot

Remembering the life and poetry of Marie Ponsot 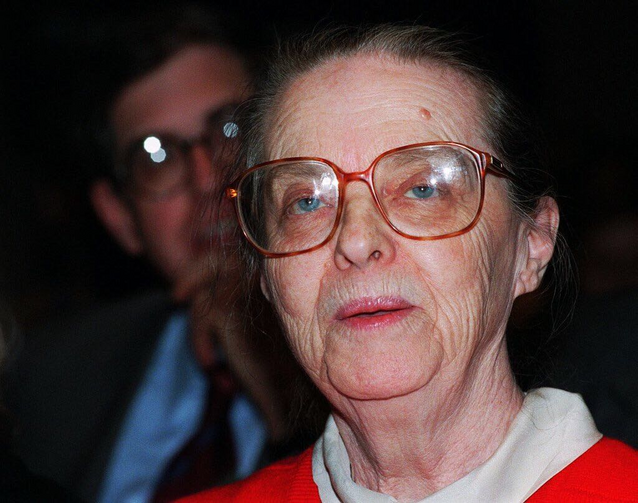 The poet Marie Ponsot, who died on July 5 at age 98, had a life eventful enough to overshadow her poems. Nevertheless, future generations of readers will still surely be grateful for the latter. In collections like True Minds (1956), The Green Dark (1988), The Bird Catcher (1998) and Easy (2009), she wrote uncompromising poetry that hinted at the influences of James Joyce and Gerard Manley Hopkins, S.J., fiercely intellectual and breathtakingly simple, intensely serious with flashes of dazzling wit, patiently honed and yet natural, with the unforced ease that she saw as an ultimate ideal in writing.

Among the many honors she received over the course of her long career were the Ruth Lilly Poetry Prize from the Poetry Foundation, the Delmore Schwartz Memorial Prize and the Shaughnessy Medal from the Modern Language Association. She was also elected a chancellor of the Academy of American Poets in 2010.

Born in Brooklyn, Ponsot graduated as a teenager from St. Joseph’s College for Women in 1940 before studying 17th-century literature at the Columbia University graduate school. There, she acquired a lively esteem for the poet John Donne, as she told an audience at the Philoctetes Center in November 2007:

[Donne] had a childhood we don’t know too much about, and the reason we don’t know too much about it was that his mother—talk about illegal—his mother was a Catholic. That was one of the things for which you could have your head removed and stuck on a pike on London Bridge. She was overtly Catholic. She didn’t try to hide it, although her harboring of priests was not on the domestic premises. She contributed to a cousin of hers who did that. Donne’s own travel through what people generally suspect was the Jesuit household of one of his cousins as a boy preceded his appearance at the university, where he never took a degree because you had to swear various things to do that meant a renunciation of the Catholic idea.

After the Second World War, Ponsot traveled to France to work at Unesco. She married the French painter Claude Ponsot, and they had seven children, most of them born after the couple’s return to the United States. When their marriage ended in divorce in 1970, she supported the family by translating and adapting works by Paul Claudel, Henri Ghéon and Diego Fabbri for Catholic media, including “The Catholic Hour” and “Directions”TV series.

Among the many honors Marie Ponsot received were the Ruth Lilly Poetry Prize from the Poetry Foundation, the Delmore Schwartz Memorial Prize and the Shaughnessy Medal from the Modern Language Association.

Happily, the work she did to support her large family was mostly inspiring. Her youngest son’s godmother, Claire Huchet Bishop (1898–1993), a Swiss-born American children’s writer, recommended Ponsot to her publisher as a translator. Ponsot translated dozens of French children’s texts of different lengths, as well as the more substantial and dazzling Fables of Jean de La Fontaine, for general readers.

In addition, a friend of her brother’s recommended her to teach in the Search for Education, Elevation and Knowledge (SEEK) Program he was organizing at Queens College to support people of color applying to the City University of New York. As a required publication credit, she was able to list her first collection of poems, True Minds, published in 1956 by the City Lights Pocket Bookshop of Lawrence Ferlinghetti, who celebrated his centenary earlier this year.

Ponsot found inspiration and mentorship in a variety of exemplary women in literature who preceded her. She attended the first graduate class ever taught at Columbia University by a woman, the literary scholar Marjorie Hope Nicolson (1894–1981), an authority on 17th-century literature. Another distinguished Columbia professor at the time, the philosopher Susanne K. Langer, who wrote on symbols, language and art, was a lifelong influence on Ponsot.

Ponsot remained at Queens College until her retirement, where she ardently supported work for African-American civil rights.

She was also an advocate of Dorothy Day’s Catholic Worker movement, despite finding its founder “terrifying” on a personal level. Ponsot’s poem, “Communion of Saints: The Poor Bastard Under the Bridge,” expresses empathy with a Parisian vagrant, described as

...heaped cold afaint
Below the Pont Marie will, with a shout,
Enlist among the triumphant when poor Saint
Julien’s bells will clock out
Four.

In an unpublished essay, Marie Ponsot wrote that the best poems “loosen our minds a little & free us of the tedium of self-regard.”

When confronting social inequality, Ponsot implied that fury can be a useful motivator. In “St. Paul and the Heart’s Harriers,” she wrote:

Lack not anger; hide not that rare pure
Rush of rage to the heart but ranting
Grant that love needs pity’s fury,
See where, loosed, love’s dark hawk rises, hunting.

Teaching, raising children and writing poetry helped her to transcend poverty and other professional and personal challenges that resulted from being a woman in the United States in the 1950s and ’60s. In “Our Lady,” Ponsot addressed the Virgin Mary:

You proved that birth, perceiving
a new perceiving point, renews;
you proved
women may suffer but do not die
of solitude work love or loss.

Ponsot eagerly sought redemptive lessons from others. Oases, survival strategies and escape hatches were essential, as implied in “The Royal Gate,” about Jacqueline Pascal—the sister of the 17th-century Catholic theologian Blaise Pascal—who lived at the Jansenist Port-Royal Abbey:

In her convent Jacqueline kept the rules.
On or under every desert there are pools.

During her lifetime, poetry turned into a vocation that helped Ponsot achieve her true essence. In an unpublished essay, Ponsot wrote that the best poems “loosen our minds a little & free us of the tedium of self-regard.” Her varied literary interests included proto-feminist Margaret Fuller, poet Hilda Dolittle (H.D.), novelists Djuna Barnes and Mary Butts, philosopher Pierre Teilhard de Chardin, S.J., and James Joyce. Among her contemporaries, Josephine Jacobsen, Jane Cooper, Richard Howard, Grace Paley and Naomi Replansky were among her strongest influences. One of her last outings in late June was to hear Replansky, a defiant working-class poet, give a public reading at age 101 in New York City’s Bryant Park.

Facets of the Maker: the life and work of Mary Oliver
Jason Myers

Ponsot also relished attending meetings of an “old women’s network” of creative people who proudly thrived in their individuality as the years advanced. She saw poetry as an element of civitas, where attending readings, teaching poetry in prisons and judging writing competitions were expected civic duties. Despite being hampered by a persistent cough due to a long-untreated sinus ailment, narcolepsy, consequences of an early bout with polio and more severe ailments near the end of her life, she would faithfully appear at readings by generations of her students, always affirming that she drew inspiration from hearing poetry spoken aloud. As she was inspired, so did she inspire.

I love the idea that participating in the varied worlds in which poetry happens is "an element of civitas ... Of expected civic duty" and an opportunity, even for the greats, to be inspired by "hearing poetry read aloud". I often weep at poetry readings, that reverent speaking aloud of words that evoke worlds unseen but keenly experienced, an intimate weaving of collective and singular experience when some listener is moved to a spontaneous Aaah!, that surprised intake of breath, as intimate a sharing as that of a worshipper overcome during Mass with the sudden awareness of Accompaniment and who whispers "amen", out of turn, lost and connected and connecting at once. Thank you for the gift of a new poet to read aloud to myself.

Benjamin Ivry has written biographies of Arthur Rimbaud, Francis Poulenc and Maurice Ravel and has translated many books from French.