What does America look like in 2019? The Whitney Biennial asks and answers. 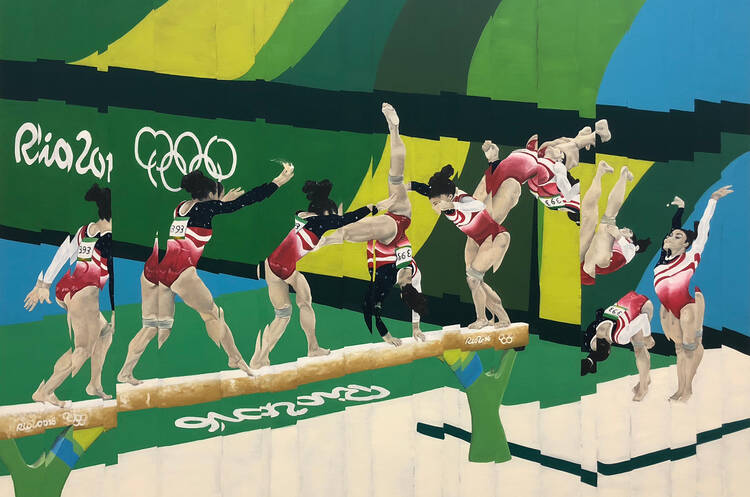 Since its inception, the Whitney Museum has existed as a home for American art. Every other year it hosts the Whitney Biennial, which famously asks the question: What is art in America today? A question that can be broken down into two separate lines of inquiry: What is art? And, what is America?

Upon entering the museum we know that these questions are on the table again this year. Hanging above the ticket counter is Jeffery Gibson’s enormous quilted technicolor dream flag tapestry, “Keep on Moving.” Messages like “their spirits are present,” “she rewrites his story” and “they want to be free” run across the stripes of the flag like bumper stickers in a traffic jam outside a Grateful Dead concert.

What is art? And, what is America?

It serves as a clue, hinting at what is to come: an exhibition where everything is free to be questioned. It’s an exhibition where voices from the margins—black, indigenous, latinx, female, disabled, L.G.B.T.—are brought to the center. An exhibition that doesn’t sacrifice the work’s aesthetic sensibility or artistic craftsmanship. It takes pride in the hand of the artist.

The curators, Jane Panetta and Rujeko Hockley, visited hundreds of artists in their studios; 75 artists and collectives agreed to participate. The crop is the most diverse in the museum’s history. A majority of the artists are people of color, and there are more women than men represented for the first time ever at the biennial.

Upstairs the question posed by “Keep on Moving” keeps on moving. Like Gibson, Eric N. Mack plays with the flag’s formal concept to disrupt our understanding of the American experiment in “Proposition: for Wet Gee’s Bend Quilts to replace the American flag—Permanently.” His new version of the flag, a patchwork of colorful found fabrics, is flowy and gentle, an alternative to harsh, graphic red stripes and sharp white stars against a blue background. Full of floral motifs and pinstripes, it is calming, like a favorite childhood blanket.

Artists go to the studio to process the world around them.

There is a scarf that reads 1776 in cream, raw sienna, a rich forest green and sunrise orange—a leftover from the kitschy memorabilia produced for the U.S. bicentennial. Nothing is cold or clinical about Mack’s piece. Like many others in the exhibition, it is homey and idiosyncratic. You can tell a real person made it, which reminds us that artists go to the studio to process the world around them. They do so through the creation of material objects.

The flag is a symbol of America, and so is the anthem. In recent years the anthem has been made increasingly controversial by the activism of Colin Kaepernick, former quarterback for the San Francisco 49ers. Kota Ezawa captures this national moment in his water color animation “National Anthem.”

The animation shows Kaepernick kneeling during “The Star Spangled Banner,” a strings-only rendition of which wafts through the gallery. Walking through the rest of the floor, the museumgoer is haunted by this soft, slow version of the song. Kaepernick is a stand-in for the marginalized voices the exhibition seeks to represent.

Artists also use sports—America’s pastime—to talk about ideas of nationhood: who we are and what we represent. In addition to Ezawa’s animation, there are oil paintings of the U.S. gymnastics team competing in Rio de Janeiro by Jeanette Mundt. As the placard reads, the frame-by-frame stop motion style alludes to Eadweard Muybridge’s 19th-century motion studies. But the stronger conceptual connection is to Muybridge’s collaborator Thomas Eakins, and his paintings of men rowing on the Schuylkill River in Pennsylvania.

Those paintings, like most of Eakins’s work, forge a narrative of national identity. Mundt tells the story of America through the bodies of young female gymnasts moving across canvas. They are strong, beautiful and victorious—but, as the curators let us know, she also “hints at the complex systems—nationalist, sexist, and technocratic—underpinning the Olympics, the sport of gymnastics, and the media covering them.” In these paintings America is the shining city on a hill: We are beautiful and should be celebrated. But we are also built on a foundation of systemic oppression. Both are true.

One cross current in the curation of the work that may come as a surprise to most viewers of contemporary art is the way in which artists in this year’s biennial actively engage with spirituality. It has sometimes been said—rather reductively—that there isn’t room for religion in modern art. But this year we see that spirituality is still very much a part of artists’ lives, and influences their practices.

Upstairs, three ceremonial garments by Jeffery Gibson are inspired by the indigenous Ghost Dance movement. In the same room, Tiona Nekkia McClodden documents her own Santería religious practice and explores its relationship to colonialism in “I prayed to the wrong god for you.” The most striking piece that addresses spirituality head-on is Nicholas Galanin’s tapestry “White Noise, American Prayer Rug.”

Something about this tapestry synthesizes our current moment. It is a simple image, the noisy black and white static of a television set. You almost hear a crackling emanating from the fibres woven together. It is numbing, standing in front of this field of nothingness. A feeling that in the last few years has become more and more relatable. In 2019, outrage feels passé.

But it is a prayer rug: a site for devotion, discernment and contemplation. What should we be discerning, reflecting on or thinking about? The pun-laden title leaves little to the imagination. Whiteness: the elephant in the room, our nation’s original sin that has never been addressed. It is sobering to hear this from an indigenous voice—a voice connected to the land long before our nation was. The moral clarity is unsettling, but hard to argue with.

Even in the basement, next to the bathrooms and coat check, two portraits of Kanye West by the photographer Heji Shin engage with religion, hanging like icons. The more affecting of the two, “KW1,” depicts a blond Kanye, hooded and solemn against a flashbulb-yellow backdrop, like a battle-scarred sage. With his eyes cast in shadow, Kanye is mysterious and mythical, the patron saint of a frenzied era.

Outside on the balcony, overlooking the downtown cityscape, is the wackiest addition to the biennial, Nicole Eisenman’s installation, “Procession.” Frenzied wouldn’t even begin to describe it. Composed of about a dozen figurative sculptures, it features a standing bronze figure dragging a cart on which another figure is bowed. The bowed figure is a mess—an ogre whose skin is covered in something like swamp goo or German-chocolate frosting. There is a mountain of dust bunnies on its arched back, as well as foam arrows and a small illustration of Auguste Rodin’s “The Thinker.” The cart doesn’t seem to be going anywhere: the wheels are square.

This is what our Thinker looks like in 2019, capitulating to madness. Occasionally, the bowed figure on the cart will emit fumes from its rear. A fantastical fart, causing a particularly joyous reaction from adults and children alike. The entire scene is Sisyphean and bizarre, from dangling tuna cans to the pair of gargantuan, fuzzy New York Giants knit socks worn by the bowed figure. It evokes a sense of disaster; possibly Pompeii or the second panel of “The Garden of Earthly Delights.” Or perhaps it’s light-hearted, like Mardi Gras or a pride parade.

Your guess is as good as ours. But whatever is going on here, it feels appropriate for the times we live in—much like the 2019 Whitney Biennial itself.

I am aware that quibbling with an art review is a sure sign that one does not have enough to do, but in my defense I claim that I carefully allocate my limited attention to getting the essentials done. My quibble is the implied but unsupported truth that the exhibit is both accurate and comprehensive in its pretension to reflect America today, and that “this is what America looks like.”

The review seems to assume that the concerns and everyday activities of all of those who are not in the habit of dropping by the Whitney a couple of times a year are, as the exhibit is, similarly concentrated on “the margins.” The reason that some people, events and conditions are “on the margins” is precisely because to the vast majority of us, they are “marginal.” Not that they aren’t important, and I thank God that artists, missionaries and saints-in-making are paying attention.