The final challenge of ‘Game of Thrones’: ‘We need to find a better way’ 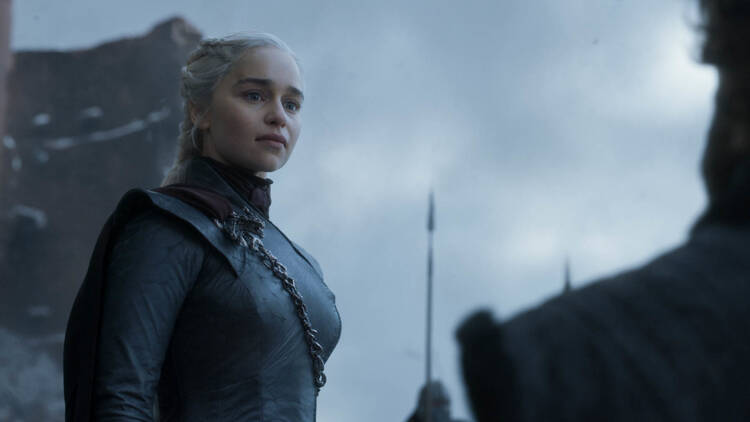 For me, the most powerful moment on the series finale of “Game of Thrones” (other than watching a grief-stricken Drogon burn down the Iron Throne) was a tiny moment easily missed in between the episode’s big (Dany!) and crazy (Bran?) twists.

The assembled lords and ladies of Westeros sat arguing over what to do following the (spoiler) death of Daenerys Targaryen at the hands of Jon Snow. And Ser Davos Seaworth, a jumped-up smuggler with a silly title who over the course of seven seasons somehow became the show’s voice of wisdom, interrupts. “We’ve had enough war,” he says, voice thick with emotion. “Thousands of you, thousands of them. You know how it ends. We need to find a better way.”

Many articles will be published this week about what Jon did to Dany, and more importantly what show creators D.B. Weiss and David Benioff did to her, and rightly so. The one episode heel turn of Daenerys Targaryen from Khaleesi, whose sole purpose was to free innocents from the brutal social structures of Westeros, to Mad Queen who burns a city of innocents alive was a bizarre act of betrayal of their own character. Whether you see it as just a failed attempt at the very difficult task of landing this crazy plane; a final example of the show’s serious problems around women—few shows have crafted such an array of outstanding strong female characters, and just as few have regularly treated women with such violence and contempt—or an out-of-nowhere moment of xenophobia, a foreigner summarily scapegoated to create social union, “Game of Thrones” will always have that choice hanging around its neck.

But Spooky Bran, who stares at people like he is imagining what they look like without their skin on and appears to have kind of manipulated everyone to get to this point, is just an enormously weird and silly choice to be the ruler of anything.

Many articles will also be written about the seriously wacky choice to make “Bran the Broken” King of Westeros. I’m all for the Misfit Toys council of advisors that come with him; undoubtedly these nerds will be running a mighty fine game of D&D every Friday night. But Spooky Bran, who stares at people like he is imagining what they look like without their skin on and appears to have kind of manipulated everyone to get to this point, is just an enormously weird and silly choice to be the ruler of anything. Good luck getting his attention once he starts warging into Drogon.

Dozens of articles will also be written about really important things, like Jon’s reunion with Ghost, or whether his last scene doesn’t mean that Jon is less “on the Wall” than “had a visit to the Wall on the way to his new Wildling life.” (What is the point of guarding the Wall now, anyway? Might as well burn in some water slides and start a theme park. 'Come Ride a Thousand Foot Tall Sheet of Ice!’)

There’s also the question of the finale’s unexpected happy endings: Sansa gets her kingdom, Arya gets a fresh start and Brienne gets to write about Jaime. (Okay, that is not a great ending for Brienne. See: Creators’ treatment of women.) After all the years of misery and anxiety we’ve witnessed, I want to be grateful for some genuine happy resolutions.

We know that the real Long Night of humanity is not some supernatural struggle that will be thrust upon us, but the insanity we are loosing upon ourselves.

But if almost a decade of watching “Game of Thrones” has taught me anything, it’s that fairy tale endings are for children. And in some sense what has made the show so engrossing is the way it has mirrored the horror and hardship of our own reality. We know that the real Long Night of humanity is not some supernatural struggle that will be thrust upon us, but the insanity we are loosing upon ourselves. We know how fragile and hard-won a hopeful future appears to be.

On ‘Game of Thrones,’ Jesus Christ is a girl on a dragon
Jim McDermott

In an interview six months ago, Peter Dinklage, who plays Tyrion Lannister, said the final season “questions everything, which I love. It really makes you question yourself.” As wrong as the creators got Dany in the end, it’s also true that I spent seven seasons somehow believing that a self-appointed queen amassing followers on a whole other continent could somehow show up in Westeros and people would just hand her the throne. (Also, the idea that a girl on a living nuclear weapon could somehow be a stand-in for Jesus is something I am not going to live down anytime soon.) It’s the same sleight of hand “Thrones” has been doing so well all along: The show makes you believe in someone so much that you miss the deep, deep trouble they’re in.

Yet the real question I find myself asking at end of this tremendous, moving, nightmarish, flawed series comes back to those few words from Ser Davos. There’s such yearning in his voice when he says it: I can feel that longing in me. In our world, how many more metaphorical throats need to be cut until we’ve had enough? How many people need to be thrown in cages, how many opponents humiliated or turned into scapegoats? In the Catholic Church, how much longer must we endure our own games of thrones?

We know how all of that ends. And there’s so much more important stuff to do.

When do we claim our dream of spring? When do we choose a better way?

I suggest a final, FINAL episode entitled “The Ladt Temptation of Dany” in which she envisions what she might do but ‘discerns’ a more compassionate and “merciful” (Jon used that word in trying to convince her) way of proceeding. She becomes graced queen, working toward building your better world.