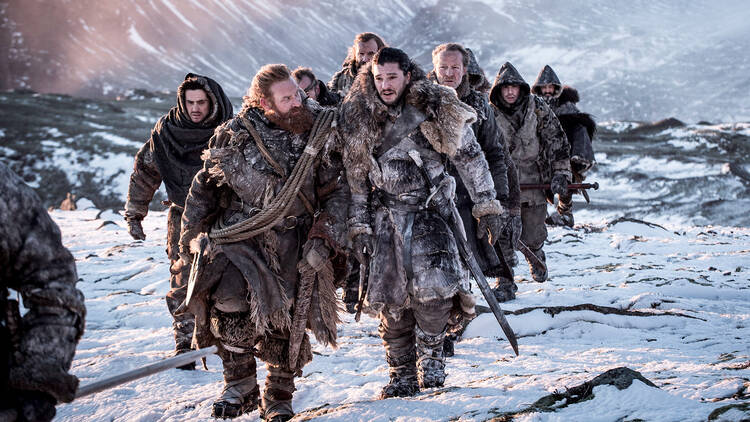 From its series premiere, in which golden-locked wonder twins-with-benefits Cersei and Jaime Lannister pushed 7-year-old Bran Stark out of a window to protect their forbidden love, brutal political machinations has made “Game of Thrones” the inescapable vortex for all water cooler conversation everywhere. On “Thrones” no oath is entirely trustworthy, no character truly safe. (Tell me I’m not alone in having been terrified for Arya’s life even as she walked up to Littlefinger last night. I know she’s a Faceless Man, but THIS IS LITTLEFINGER.)

As the show’s following has grown, its characters and themes have come to populate not only our imaginations but our headlines. Every new political reversal or drama gets interpreted in its light: Steve Bannon is Arya Stark (or more recently The Night King), Jared Kushner Hand of the King, John Kelly a dragon (which I guess makes Donald Trump Daenerys Targaryen—do with that what you will).

The show’s resonance with our own times is undeniable. We, too, find ourselves gripped by internal conflicts, wars and enemies, many of them viewed as of ultimate urgency.

But this season the show has worked hard to demonstrate that its title is a trap, a ruse. No matter who sits on the Iron Throne, calls themselves royalty and wears a pretty crown, there are only two real powers in Westeros, that of life and that of death. And they’ve been at war from the series’ start. In the show’s opening scene, Rangers find themselves up against the somehow reanimated dead. A major plot of the first season is also Jon Snow committing himself to guarding this 300-mile long, 700-foot high ice wall. It had been so long since the Wall has been needed, its purpose has been reduced to the same narrow politics as everything else. But the question was always there in its scale: What kind of threat could ever require a wall like that?

This season, while most of the main players have worked to protect, increase or cement their power, Jon Snow has been standing at the frontier, desperately trying to draw their attention away from themselves. “We’re all on the same side,” he keeps insisting, to mostly puzzled looks. “This isn’t about living in harmony. It’s just about living.”

The show’s resonance with our own times is undeniable. We, too, find ourselves gripped by internal conflicts, wars and enemies, many of them viewed as of ultimate urgency.

Meanwhile events like the unprecedented flooding in Houston illustrate we also stand before a far larger threat. We might quibble about the scale or timeline, but global climate disaster is coming. The recent New York Magazine piece on the ways that might happen has been much debated for its hyperbole, but even one-one hundredth of the catastrophes it predicts could see a significant percentage of life on this planet faced with existential threat.

Accusations of hyperbole were also used to write off a March 2016 ProPublica and Texas Tribune co-report that scientists have been saying for years that “Houston’s perfect storm is coming—it’s not a matter of if but when.” When approached for his perspective, then-new Houston mayor Sylvester Turner had this statement released by the city’s public safety and homeland security director: “Only a small portion of the city of Houston is at risk for major storm surge.”

Climate change is the real battle before us, a battle quite possibly against extinction. It sounds ridiculously fantastic to put it like that; if only we had dragons and a Night King to help us believe.

Climate change is the real battle before us, a battle quite possibly against extinction. It sounds ridiculously fantastic to put it like that; if only we had dragons and a Night King to help us believe. As Dany says, “You have to see it to know.” But we are seeing it, in places like Houston, and our conclusions seem to mirror Cersei’s: you go ahead and fight, I’m gonna stay here and act like winning the game is still what’s important.

“When the snows fall and the white winds blow, the lone wolf dies,” say the Starks. “But the pack survives.” In the final season of “Game of Thrones,” we’ll see how well that strategy works against the Night King and his ice dragon.

For us it is not as simple as defeating an army. But it is about working together. And though the worst of it may be decades away, it’s also true that the “walls” we imagine protecting us are only impregnable until they suddenly aren’t.

Saints in Heaven!! We are still in the midst of this ongoing tragedy and you're trotting out climate change? For many decades, scientists have warned of upcoming disaster primarily due to unlimited building along the coast and in flood plains. Hurricanes do occur in these areas. It's difficult to be charitable. I imagine your hot little fingers burning up the keyboard to make a smug assessment of the root cause of this unspeakable event. Like Joe McCarthy, have you no shame?

I know. They're even investigating why the USS McCain collided with a tanker in the Pacific and the dead sailors aren't even buried. We should honor their memories and the victims of the previous collision by never asking why. That way, future sailor deaths from uninvestigated reasons can be a blood sacrifice in honor of the previous dead and so forth and so on.
Two once in 500 year rain events take place in the same area within 25 years. A hurricane cranks up from a tropical depression to a CAT4 in 48 hours. Let's ignore the whole thing or maybe we can adapt to reality.

Big difference, HUGE difference between investigating and proclaiming that all of the facts are in so no further research required unless there is a behind the scenes agenda, of course.

BTW. The comparison would be to, upon receiving word of the Naval tragedy, immediately place a request for additional funding for more equipment. Can't let a good tragedy go to waste, ehh?

Many factors have caused the tragedy in Houston & along the coast line. Unlimited building, as you state. The area being prone to hurricanes, as you also state. However, global warming specifically the higher temperature of the water in the gulf makes it easier for water to evaporate & that equates rainfall. Why is it shameful to state a fact. You might not like the fact. People may have chosen for political reasons to deny the fact. But it's a fact that not only Houston needs to deal with, but the rest of the country as we see impacts as well. In the meantime, my thoughts and prayers are with everyone impacted directly & indirectly along the coast.

That is probably the most ridiculous headline I've ever read, and the article was just as ludicrous.

I don't see a "post comment" button, so forgive me for tagging onto yours.
As I read the article, I thought at first that it was a joke. apparently not. Someone sees the world in terms of movies (like the character Tony Dinozzo on NCIS!) We're in greater trouble than er had thought. ("They breed and they vote.")