Review: New exhibit reminds us the Holocaust wasn’t long ago or far away 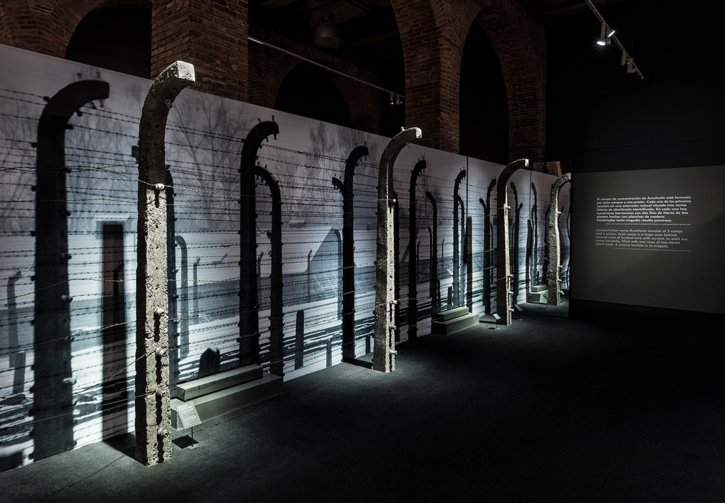 Auschwitz Fence Section Concrete posts that were once part of the fence of the Auschwitz camp (1940-1945). These posts were covered in barbed and electrified wire, ensuring that no prisoner could escape. Collection of the Auschwitz-Birkenau State Museum, Oświęcim, Poland ©Musealia

Imprisoned in the Auschwitz concentration camp in occupied Poland in 1944, Mendel Landau asked a man entering the camp to borrow his tallit katan, a Jewish prayer shawl. Landau wanted to offer a prayer in the appropriate dress. An SS officer nearly beat him to death for praying, and threw the tallit into the barbed wire. In spite of the obvious danger, Landau went after the garment, so he could return it. The original owner no longer wanted the prayer shirt because it was a dangerous item to possess, but Landau kept it with him in Auschwitz. He took it with him on the death march out of Auschwitz. He had it with him when he ultimately emigrated to New York.

“It is thanks to people like Mendel Landau who persisted in following their commandments and enacting devotions under the most difficult circumstances, like Auschwitz, that [the Jewish] people still exist,” said Robert Jan van Pelt, a historian and the chief curator of a new exhibition at the Museum of Jewish Heritage: “Auschwitz. Not long ago. Not far away.”

Mr. Jan van Pelt described this tallit as “the key artifact” of the more than 700 original objects now on display in the exhibition. The majority are drawn from the Auschwitz-Birkenau State Museum in Poland, as well as other international sources. But curators explicitly sought to include items that connected this history to New York—like the tallit katan used by Landau, which is on loan from the Amud Aish Museum in Brooklyn.

“We wanted to create an exhibit that speaks to New York and to New Yorkers,” Mr. Jan van Pelt  said of the museum’s collaborative curation choices. The exhibit is the combined effort of the Auschwitz-Birkenau State Museum, the Museum of Jewish Heritage and Musealia, a Spanish company that manages traveling exhibits. While geared toward the city where it now resides, the exhibit can teach and offer a deeply personal experience to any visitor.

The exhibition is massive. It is a multimedia experience that spans three floors of the museum. An audio guide explains artifacts and photos and links to video testimony by survivors. Theodor Wonja Michael, who appears to be in his late 70s, looks into the camera and speaks about being of both German and African descent. He speaks of theHitlerjugend, Hitler Youth. Michael had been denied entry into the organization because of his skin color and heritage. He said he thought he would have joined the Hitler Youth if he had been allowed. Instead, he was socially excluded and ultimately imprisoned in a labor camp.

The experience provides an exhaustive account of the horrors of the Auschwitz death camp, as well as the events and plans in German history that led to this organized killing machine. I spent more than two hours in the three-floor exhibit, learning about the centuries-old Polish town of Oświęcim that would become the site of Auschwitz. The exhibit also informs visitors about the legacy of toxic gas in the trenches of World War I, anti-Semitic Nazi propaganda, and the eugenics experiments and killings of the early 1940s. I could easily have spent four hours there. The exhibit is that big, that extensive and that engrossing. But it manages not to overwhelm. The individual artifacts grounded me and gave me a foothold for understanding the genocide and its causes. They also provided a window into the intense suffering of those killed and imprisoned during the Holocaust. Here were their possessions, their photographs, their suitcases, the last things they held onto.

In one gallery, sitting behind glass, a gas mask from World War I looks like an alien face. Nearby, two pages are presented in a brown portfolio that is open like a book. On the right is a proclamation from the 16th century by Ferdinand I, the Holy Roman Emperor, which ordered all Jews to be identified with a badge on their clothing. On the left, a letter gifts this proclamation to Hermann Göring, a top Nazi commander and one of Hitler’s most loyal aids. Ferdinand’s proclamation was a birthday present from Reinhard Heydrich, architect of the Final Solution.

In a room filled with Nazi propaganda posters, a display of picture books in the corner tugs at my heart. I often spend time wandering through the children’s section when I visit bookstores, so the messages in one particular children’s book in the exhibit,Der Giftpilz (The Poison Mushroom) are jarring. The cartoonish blues and yellows of Der Giftpilz might be found be in any picture book today. But the drawings and the text encourage young German readers to spot Jewish people and identify them as evil. One page warns against Jewish people who are baptized, saying they are still not Christian. Children’s books, usually so wholesome, birthday gifts, vibrant statements of life, are here perverted by hatred and anti-Semitism.

Children’s books, usually so wholesome, are here perverted by hatred and anti-Semitism.

Up on the second floor, a white lab coat is juxtaposed with a pair of dirty and bent glasses in the same glass case. The lab coat belonged to Georg Renno, a doctor and a director of the T4 program that enforced euthanasia in Germany. Unlike the pristine coat, the broken glasses belonged to a victim of the euthanasia program—one of the 28,000 people Renno was responsible for killing.

As I move toward the part of the exhibit that addresses the Final Solution, the Nazi effort to murder all Jewish people in Europe, many artifacts catch my eye: the original wooden barrack bunks from Auschwitz, a whip used to beat prisoners, photos of victims, and some of their personal effects like suitcases, socks and small jewelry. I remain the longest in front a stretcher, simple, fabric stretched between wooden shafts. Part of the cloth appears to have been torn and then resewn. It has some dotted stains that are a rusted red; blood, I assume. I wonder, How many lifeless bodies did this stretcher carry?

The exhibit ends with survivor testimonies. I see Mendel Landau’s tallit katan, and hear his story in the headphones of my audio guide. In a video of survivors, one woman shares the importance of having a friend inside Auschwitz; others implore the audience not to hate. Each person who walks through “Auschwitz. Not long ago. Not far away” will be struck by different artifacts, pictures and stories that clarify every more painfully the horror of the Holocaust and the courage and determination of its survivors.

Correction: This article was updated May 20, 2019 to clarify that the Auschwitz concentration camp was in "occupied Poland" not "Poland," as previously stated.