Review: What if Noah’s ark was told through his wife’s perspective? 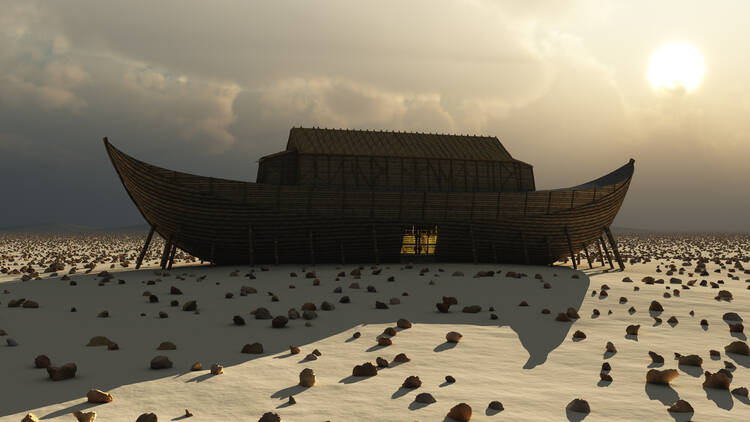 Stories from the Bible springboard novelists’ imaginations in part because they are so spare. Often they sketch the basic details but elide mention of how all the people involved felt about these events. So it is with the story of Noah in Genesis. “Make yourself an ark of gopherwood,” God tells Noah. Cover it with pitch, fill it with pairs of animals, and take your family and set sail on the floodwaters. O.K., we infer that Noah replies, I’ll get right on that.

We know from Genesis that in a world full of wicked people, “God found favor with Noah.” But we have no idea how God felt about Noah’s family, including his wife, who is not named. The Jewish midrash Genesis Rabba says that Noah’s wife is Naamah, and Sarah Blake uses this name for the title and protagonist of her dream-like and intriguing first novel. Generations of Genesis readers have probably imagined Noah’s wife as obedient, chaste and reverent: so unobjectionable she does not merit much mention. Blake depicts Naamah as someone much wilder, sharing more in common with the animals she cares for. She is a practical, capable worker—it is Naamah who mucks out animals’ pens and kills newborn lambs to feed to large predators—but is also sensual and fanciful. Naamah, in Blake’s imagining, swims in the floodwaters and explores. She is also bisexual, adulterous and prone to seduction by an aquatic angel.

Naamah is the only one of the eight people aboard the ark who is comfortable with every aspect of living in a body—including sex, childbirth, nursing and death. When preparing the ark, Naamah realizes, “They would need a sealed bucket to [defecate] in, to clean up with, and she knew no one else would think of this.” The others do not venture into the floodwaters, fearing they will find bodies of those who perished, but Naamah dives in because she has to know. “It feels freeing, to swim, to be a part of the flood,” she tells Noah. “We’ve been so separate from it, from everything.” She asks Noah why the ark has not sunk with all the heavy animals inside, and he insists he does not know. The mystery of this situation suffuses Naamah. Noah takes everything on faith, but Naamah is not able to. She has to see and touch and learn. Naamah’s dreams mingle with reality and transport her to other times and places.

Blake writes in concise, honed prose, leaving abundant white space on each page. She imagines details about some of the mysteries behind the Noah story—like, did gnawing gerbils escape their wooden pens? (Yes.) But she leaves other questions unanswered: Just how did they lure the appropriate number and kind of animals onto the ark? In Naamah, there are more than one pair of some kinds of animals, which makes sense, given the chances of them getting sick and the need to feed smaller animals to larger ones. In one of the most beautiful scenes, Naamah communes with a thousand atlas moths. When they die, she gathers their bodies to feed other creatures and waits for their eggs to hatch and fill the room again.

Naamah is the only one of the eight people aboard Noah's ark who is comfortable with every aspect of living in a body—including sex, childbirth, nursing and death.

“When the rains began, Noah’s doubt left him,” Blake writes. “When the rains continued, his guilt left him.” But Naamah’s doubts and guilt endure. It seems she commits some moral transgressions out of despair that she is not worthy of having been saved from the flood, as a sort of challenge to God. She eventually tells God: “I’m starting to accept that You will not judge me. Or that You have already passed judgment, and it doesn’t have much to do with me. I get it! You determined me not wicked, even if I feel otherwise.”

Blake’s vivid imagining of the life of a woman the Bible left unexplored takes some unexpected turns, but in doing so plunges readers more deeply into the mystery of God’s relationship with humanity’s second-chance Eve.

This article also appeared in print, under the headline “Humanity’s second-chance Eve,” in the May 27, 2019, issue.