A dynamic and damaged power couple face off in ‘Fosse/Verdon’ 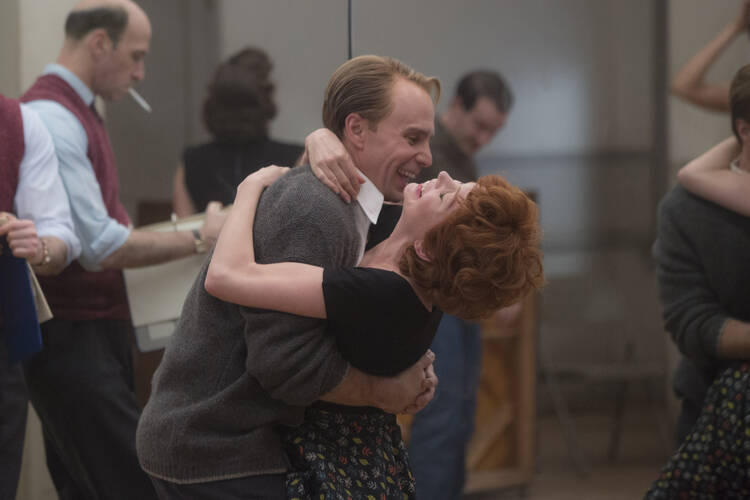 The slash in the title is doing a lot of work. In the new limited series “Fosse/Verdon” (bowing on April 9 on FX), the brand-name director/choreographer of the stage musical “Chicago” and the film version of “Cabaret” is fused to his less famous muse, the quintessential Broadway hoofer Gwen Verdon. It is a portrait of a creative power couple that insists, mostly convincingly, on seeing their successes (and failures) as inseparable. These two damaged overachievers needed each other, even or especially when they were not together.

But “Fosse/Verdon” is more than the sum of these two parts; a rivetingly unstable compound of biopic, prestige cable drama and musical comedy, it is also a powerful corrective to the predominant narrative of the difficult male genius.

These two damaged overachievers needed each other, even or especially when they were not together.

Indeed, it is easy to imagine a version of this story that puts the roguish anti-hero Fosse centerstage, orbited by his women and his addictions and his deadly compulsion to work. That is because it has been done: by Sam Wasson in his vivid 2013 biography Fosse, which is in part the basis for the new series, and by Fosse himself, in his own barely veiled 1979 autobiographical film “All That Jazz” (a stylistic touchstone for much of the series as well). Making equal time for Verdon is more than a gesture to the era of #MeToo: It enriches and complicates everything, from the personal dramas to the art-making (and deal-making).

In the show’s fifth episode, Verdon (Michelle Williams) compares notes with Fosse’s new girlfriend, Ann Reinking (Margaret Qualley). The younger dancer is starting to realize the high cost of loving a selfish, unbiddable man-child. Verdon, Fosse’s third wife, has been there. Reinking wonders: What did Verdon get in return for all the pain, the cheating, the uncertainty? A daughter, Nicole? Verdon fixes Reinking’s gaze and adds the names of the iconic roles Fosse created with her: “Not just Nicole. Lola. Charity. Roxie.”

It doesn’t hurt the show’s ambitious dual narrative that Williams is shatteringly good as Verdon, giving full due to her old-school glamour, her incisive smarts and her fine-grained emotional lability. (She is not a bad dancer either.) When the sleepy-eyed Sam Rockwell, as Fosse, first sees her, in a one-on-one audition for the musical “Damn Yankees,” he lights up like a Broadway marquee. He has met his match, and she hers, and the rest is musical theater history.

He has met his match, and she hers, and the rest is musical theater history.

That memorable meeting happens in the show’s second episode, “Who’s Got the Pain?” Scripted by Steven Levenson (“Dear Evan Hansen”) and directed by Thomas Kail (“Hamilton”), it is the best of the five episodes I was able to see in advance (there will be eight in total). The first episode—fair warning—gets off to a slow start, dunking us headlong into a mire of self-doubt and ennui as Fosse embarks on his masterpiece, the film adaptation of “Cabaret,” while an absent, supportive Verdon waits by the phone.

The second episode jumps back to the creation myth in which Fosse’s style emerged via Verdon, and vice versa. As Fosse’s second wife, Joan McCracken (Susan Misner), watches Verdon dance his steps onstage, she sees the writing on the wall; this dynamic pairing represents not just a threat to her marriage but a potent new alchemy. “I’d say it’s like watching him up there,” says McCracken, a great dancer in her own right who had earlier helped shape Fosse’s taste. “But it’s more like watching what he wishes he was.”

The stories we tell now, and how we tell them, deserve scrutiny by today’s standards.

Fosse and his pirouetting shame spirals get plenty of screen time, particularly in the fourth episode, “Glory,” in which he glumly stares down a table of Emmys and Tonys and an Oscar, and realizes that no amount of acclaim can fill the black hole at his center. And Rockwell more than holds his own against the klieg lights of Williams’s brilliance. Though he resembles a flinty Robert Duvall more than the lean, vulpine Fosse, he captures the man’s watchful preoccupation, and the mix of orneriness and sweetness that made him, by most accounts, irresistible and pitiable in roughly equal measure.

How much pity should we extend to Fosse, though? The series doesn’t quite answer that question. In one episode, as he makes his way through a show’s young female dancers like he is the only diner at a sexual buffet, one of them has the temerity to push back against his advances—and is pointedly demoted from a lead spot in the next rehearsal. It is textbook quid-pro-quo harassment, and there is no shortage of stories like this, as well as tales of more garden-variety choreographic abuse (“Again from the top!”), in Fosse’s bio.

Keep or abolish the Constitution? A fiery debate commences on Broadway
Rob Weinert-Kendt

While this arguably should not define his entire career, and his best work can be seen as an exorcism, not an exaltation, of these demons, it certainly tips the moral ledger. No amount of attempted balance—showing us Verdon’s and Reinking’s agency, or the deliverables they and others received from their transactions with Fosse, or the great art that emerged from his punishing, obsessive work habits—can explain or absolve it. “It was a different time,” goes one common excuse. No doubt! But the stories we tell now, and how we tell them, deserve scrutiny by today’s standards.

By those lights, and based on what I have seen so far (Dustin Hoffman, recently the subject of credible misconduct allegations, is a character in upcoming episodes), “Fosse/Verdon” wrestles this dilemma to a draw, and so far it is a spectacle as compelling and artful as any Fosse/Verdon dance, in which conflict and connection were embodied in the stretch of a leg or the angle of a pinky finger on a cocked bowler hat. That’s the thing about the old razzle dazzle, and it is something Fosse (and probably Verdon) understood in his bones: A peek behind the curtain at the flawed humans sweating to make the magic may demystify it, but that is where the real drama is. Under the glitter is the gold.

Rob...I heard about the upcoming program and was interested to read a review. But I could not get by: “But “Fosse/Verdon” is more than the sum of these two parts; a rivetingly unstable compound of biopic, prestige cable drama and musical comedy, it is also a powerful corrective to the predominant narrative of the difficult male genius.” I have 3 academic degrees and I have no idea what you are trying to say.