“Mary Poppins Returns,” but what is she doing here? 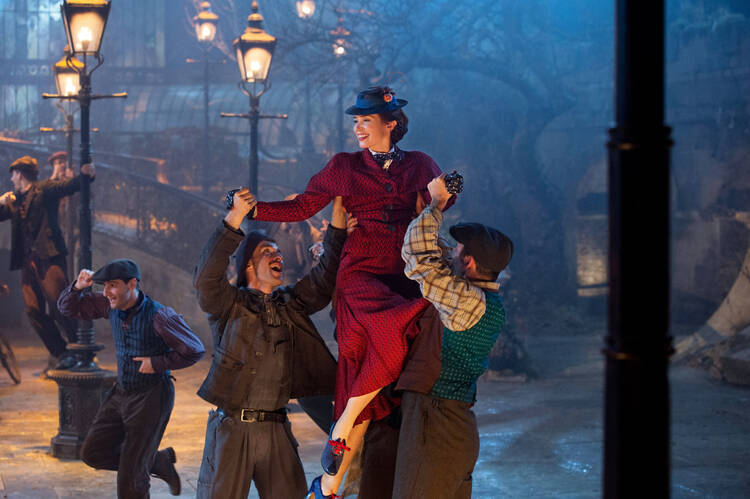 Let’s just get this out of the way up front: I consider the 1964 film “Mary Poppins” one of the great American musicals. It is not only unique among Disney films, being a fully scored live-action musical (the animated films typically subsist on no more than half a dozen songs and require fleshing out when, as in recent decades, they’ve been turned into stage musicals a la “The Lion King” or “Aladdin”). “Mary Poppins” is also in a rarefied class of first-rate musicals made directly for the screen that includes “The Wizard of Oz,” “Singin’ in the Rain” and “Top Hat.”

All of which means that Disney’s new sequel, “Mary Poppins Returns,” has a big umbrella to fill. It certainly spares no expense or effort in revisiting some of the original film’s high points. Composer Marc Shaiman expertly conjures the music-hall sounds of the Sherman brothers’ score. Production designer Rob Myhre recreates the quaint, faux-Edwardian London of P.L. Travers’s books, though the film is set some 20 years later during the Great Depression, which the Brits called “the Great Slump.” And Rob Marshall, who previously helmed “Chicago” and “Into the Woods” for the screen, directs with admirable ambition and sweep. The film’s visits to imaginary worlds offer a surfeit of animated visual splendors, both of the hand-drawn and computer-generated variety. Vigorous dances veer into parkour and BMX bicycle stunts.

“Mary Poppins Returns” certainly spares no expense or effort in revisiting some of the original film’s high points.

It’s all a bit much—a sundae on top of a chocolate cake drenched in maple syrup—but it might go down better if the film’s story, credited to director Marshall, co-choreographer John DeLuca and screenwriter David Magee, weren’t such a stiff. We find Michael and Jane Banks, the adorable imps who summoned the magical nanny from the sky in the original film, all grown up, at least in age. Michael (Ben Whishaw), a morose young widower with three small children, is barely keeping his household together when solicitors arrive with a notice of repossession, while single Jane (Emily Mortimer), following in her mother’s suffragist footsteps, is some kind of labor organizer, though Jane’s politics, like her mother’s, seem more idle hobby than consuming passion, which is perhaps why the film insists on giving her a love interest in a charming lamplighter, Jack (Lin-Manuel Miranda).

While in the original film, the smiling taskmaster Mary Poppins alighted primarily to teach the Banks’s patriarch, George, how to savor if not spoil his children, in the new one she arrives as a sort of all-around fixer at a moment of ginned-up crisis. Her descent from the clouds is staged with appropriately heart-swelling wonder, but there’s no escaping the nagging question: What’s she doing here again? If it’s to entertain a new crop of Banks children, that’s nice, but hardly urgent. If it’s to somehow help Michael win his house back from the grip of the bank—that hardly seems a job for a magical nanny, does it?

What’s she doing here again? If it’s to entertain a new crop of Banks children, that’s nice, but hardly urgent.

As Mary, the estimable Emily Blunt could hardly be better. If what she’s doing often plays a bit like an older-but-wiser Julie Andrews impression, consider that Andrews’s original performance had a knowing wink built into it as well. While Blunt does fine work throughout, she clearly sparks most eagerly to the chance to loosen the corset a bit and dip into the Cockney music-hall nudge and wink “A Cover Is Not the Book,” alongside “Hamilton” creator Miranda, who nails some quasi-rap patter verses.

But the story groans on, veering between fan service and pointless tangents, with a superfluous chase scene, a moustache-twirling villain played by Colin Firth, a daffy action scene involving Big Ben and a visit to a topsy-turvy repair shop where Meryl Streep vamps about in a ghastly orange wig with an unplaceable Eastern European accent. While “Mary Poppins Returns” superficially resembles such return-of-youthful-magic retreads as the recent “Christopher Robin” or 1991’s “Hook,” the film it most reminded me of was “The Force Awakens.” Just as that film almost slavishly followed the template of the original “Star Wars,” the new “Mary Poppins” openly correlates its big moments to those in the original, from “Chim Chim Cher-ee” to “Step in Time” to “Let’s Go Fly a Kite” (here, for the record, recast as “Lovely London Sky,” “Trip a Little Light Fantastic” and “Nowhere to Go But Up”). Novelty may be overrated but this feels positively servile.

Is ‘Do They Know It’s Christmas?’ the most misunderstood holiday song?
Joe Pagetta

One high point the new film does not try to repeat is “Feed the Birds,” the weepy ode to Christian charity that arguably sits at the beating heart of the 1964 film. For Mary doesn’t just manage to humanize Mr. Banks’s parenting; she also persuades his children that their money would be better spent helping the poor than investing in the British Empire or hoarding it for themselves. This message is of a piece with Mary’s overall mission to set the family’s priorities straight.

Rather than repeat “Feed the Birds,” the new film upends it. Indeed its most unforgivable crime—spoiler alert—is to trot out the ageless, delightful nonagenarian Dick Van Dyke, as a kindly bank manager, who explains to Michael and Jane that while they once mistakenly wanted to give their tuppence to “a bird lady,” in the end they did the wise thing and invested it, and now they’re stinking rich, thank you very much. For those like me who don’t just love the original film but take it semi-seriously, this feels like the equivalent of snatching back bread crumbs that have been freely scattered. And all the candy and cake in the world, shoved eagerly into our mouths, can’t make up for that.

At the superficial level, one can look to the repossession issue or "entertaining the children" as Mary Poppin's motivation. Her real task at hand, however, is once again to simply bring joy of family back to the Bank's household. If one is looking for the update to "Feed the Birds," it is found with "The Place Where Lost Things Go," sung by Mary/Emily Blunt, brilliantly. While the original will forever have a place in our hearts, the sequel just may have more family re-watch-ability and every tune will have at least someone in the house singing along.

Winds in the east, there's a mist coming in, like something is brewing, about to begin.
https://equalsites.com/ Site Comparision.

A mythical film from director Rob Marshall about family, about miracles, about busy life makes us forget we were kids, or we used to worry about "how to clean newborn tongue" or "how many swaddle blankets do i need" when becoming a parent , good movie suitable for all ages !!