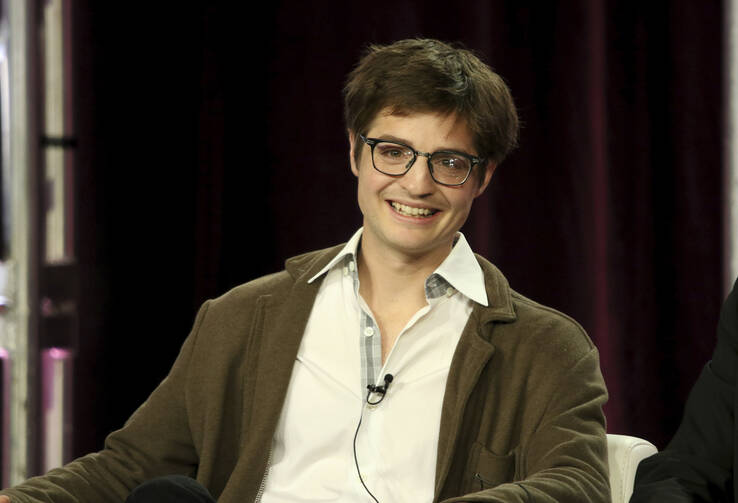 Simon Rich participates in the "Miracle Workers" panel during the TBS presentation at the Television Critics Association Winter Press Tour at The Langham Huntington on Monday, Feb. 11, 2019, in Pasadena, Calif. (Photo by Willy Sanjuan/Invision/AP)

After a couple of close readings of the Old Testament—once during Hebrew school, then again in ninth grade—Simon Rich came to the conclusion that God was not much different from us.

The comedy writer, whose novels and short stories focus deeply on notions of perspective, takes the first chapter of Genesis very seriously. Specifically the 27th verse, which reads, “So God created man in his own image.” The verse falls under the premise, he suggests during an interview with America, that the Almighty is just as petulant, insecure and imperfect as his earthly population.

“He likes to haggle and he likes to make bets,” adds Mr. Rich, who went on to cite a couple of examples of what he considers God’s temperamental ego.

“The weirder the world, the more grounded I tend to make the scenes."

That short premise functions as a mission statement and preface for What In God’s Name, Mr. Rich’s 2012 novel about Heaven Inc., “the grossly mismanaged corporation in the sky,” which features God as C.E.O. and underpaid angels scrambling to keep Earth in order. Seven years later, Mr. Rich has adapted his book into “Miracle Workers,” a seven-part miniseries airing on TBS that keeps all the specific humor and grounded settings of its source material.

The show, with original episodes airing through the end of March, stars Steve Buscemi as God, who is exhausted with Earth’s deteriorating state and decides to destroy his blue marble. Only Craig (Daniel Radcliffe) and Eliza (Geraldine Viswanathan), two angels working in the Department of Miracles, take issue with this declaration and negotiate a deal with their boss: If they can perform an impossible miracle—getting two socially awkward humans to kiss—within two weeks, then God will call off the destruction of humanity.

“Our show takes place in a cosmology that includes other galaxies and other universes,” Mr. Rich says. “I drew a little bit from religious texts, but I also see our show as, on some levels, science fiction, too. I wouldn’t characterize it a purely religious satire.”

Unlike the book’s depiction of Heaven as a sprawling Google campus, the show offers much blunter visuals, “literally a decaying factory,” Mr. Rich says. “The goal was to portray Heaven Inc. as a deeply inefficient, vast, chaotic mess, but at the same time to infuse it with a bit of magic, whimsy and fun.”

“All of those tales made a really big impression on me, stories about God and man.”

This juxtaposition is a good way to describe Mr. Rich’s writing, which often balances the surreal with the mundane and anchors fantasy with practicality, providing the perfect stakes for dramatic and comedic tension. Look to the first television series adapted from his books, “Man Seeking Woman” (which ran for three seasons on FX), or in the way Mr. Buscemi’s God fumes over Bill Maher’s monologues as he flips through channels on the couch.

“The weirder the world, the more grounded I tend to make the scenes,” Mr. Rich says. “The reason why Steve was so exciting to me to play God is because he brings such vulnerability and humanity to the role. I wanted the character of God as human as we could possibly make him.”

Mr. Rich grew up in a “somewhat observant” reformed Jewish household in New York City, celebrating the major holidays and his requisite bar mitzvah. The history of the Jewish people, particularly their biblical stories, intrigued him, augmenting his interest in Greco-Roman mythology. “I just found the stories to be very dramatic and at times suspenseful and absurd and scary and funny,” he says. “All of those tales made a really big impression on me, stories about God and man.”

He tapped further into religious studies at Harvard Divinity School, where he took a specific course around angels and their representation in the three major monotheistic faiths. “We drew a lot from primary sources, and that class had a direct impact on my writing,” Mr. Rich says. “I literally started to write comedy pieces where God has conversations with angels. Those pieces ended up appearing in my first couple of books.”

Mr. Rich’s penchant for playing with extreme power dynamics is evident in a humor essay he wrote for The New Yorkerlast year, in which he writes from the perspective of Paul Revere’s horse, Oatsy, who struggles with his rider taking all the credit for his historic gallop through town. That kind of humor has appeared throughout Mr. Rich’s writing, including his work on “Saturday Night Live,” where he wrote from 2007 until 2011, and at Pixar Studios, where he worked on scripts for movies like “Inside Out.”

In a similar strain, “Miracle Workers,” much like its contemporary television counterparts “The Good Place” and “God Friended Me,” is less interested in depicting a specific brand of faith.

“My favorite kind of character is one who is very weak and passive and controlled by some powerful force beyond their control, whether that’s an animal in relation to their human owner or a human in relation to their creator,” Mr. Rich said. “That dynamic has always made me laugh.”

Though Mr. Rich has focused his comedy on the “microscopic nature of human existence,” that did not stop him from starting a family last year. He and his wife, who grew up Christian, welcomed a daughter recently, and though they consider themselves a Jewish family now, Mr. Rich plans to take a liberal stance in the way he raises her with regard to religion. “We just want to make sure that it’s [her] option,” he says.

In a similar strain, “Miracle Workers,” much like its contemporary television counterparts “The Good Place” and “God Friended Me,” is less interested in depicting a specific brand of faith than offering a rationale for the sometimes random consequences of our actions. As Mr. Rich posits in the show, maybe the reason bad things happen to good people is that God just made a mistake. After all, there are only so many prayers that Craig, Eliza and the rest of their angel peers can handle in any given day.

“The prophets don’t always fully understand what God is telling them; the prayers don’t always make it to their destination. When heaven sends signs down to people on planet Earth, the signs are usually ignored or misinterpreted,” Mr. Rich says, though he adds, “It’s not a completely nihilistic or bleak version of the universe because on our show miracles are at least possible, and in fact prayers on our show are answered every single day.”

While his portfolio continues to grow, both on the page and in Hollywood (his next project is a movie starring Seth Rogen, based on one of Mr. Rich’s short stories), Mr. Rich still finds it thrilling to see his work adapted for the screen. Especially considering that “Miracle Workers” was originally passed over by studios and reconsidered only when Mr. Radcliffe, a fan of the novel, rescued the project as an executive producer. “He was very instrumental in making this whole thing very possible,” Mr. Rich says.

Writing fiction remains Mr. Rich’s primary passion, with baseball running a close second. Throughout What In God’s Name, he has fun addressing the countless prayers that funnel into Craig’s workspace requesting a missed field goal or a team winning the pennant. Only occasionally does God choose to intervene—brazenly picking league champions and checking on winning streaks—but Mr. Rich promises he would never pray to God for his hometown team.

“I wouldn’t waste God’s time with the Mets,” he laughs. “He made his decision on [them]. I’m not going to appeal it.” 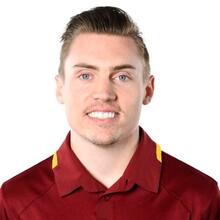 Jake Kring-Schreifels is a sports and entertainment writer based in Washington, D.C. He studied communications and theology at Fordham University.

Interesting article! Simon Rich is one of the promising writers of the modern time. Deep absurd thought is found in his writing. And his writings provides a wide range of thinking about God and his creature.
I am also a writer and I know that only deep thinking can lead to such a writing piece. When I write for essayontime, I also go through deep research so that I can bring up the core element of any topics. Simon is doing actually a great job. I appreciate him.