The wisdom of ‘The Work’: self-discovery inside a prison’s walls 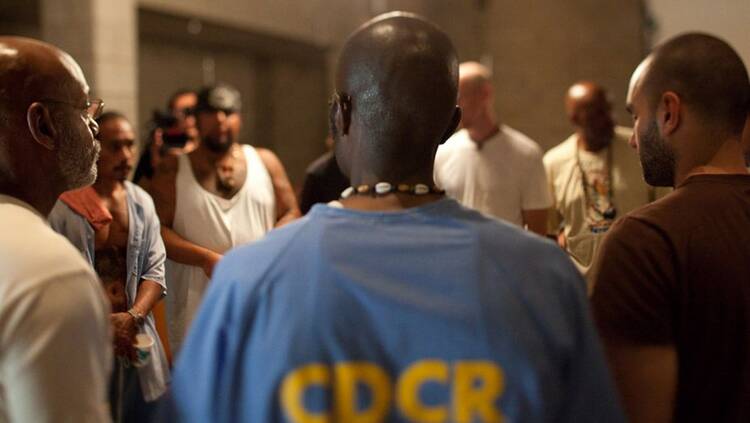 In August 2004, I entered the Jesuit Volunteer Corps in Sacramento, Calif., as an excited, naïve, altruistic-minded young adult. My Jesuit volunteer placement was at Folsom State Prison in Folsom, Calif., where I served as a full-time volunteer Catholic chaplain under the direction of the head Catholic chaplain, Deacon Dennis Merino. I lived with seven other ambitious young adults recently out of college and ready to follow St. Ignatius of Loyola’s instruction to “Go forth and set the world on fire.”

Over the first 22 years of my life I had received tremendous love from my family and friends. I was (and still am) a person of unearned privilege, and I believed it was time for me to take the next step in spreading what I had been given.

“The Work” invites viewers into the depths of human souls as men from inside and outside the prison community courageously embark on the journey of self-discovery.

However, I quickly learned that it was not the gifts and love that I had to offer that would astound me. Rather, it was the talents, love and compassion that a handful of the maximum-security male inmates expressed to me that was overwhelming. I encountered a level of truth, authenticity and kinship that I had never experienced before. Thirteen years after my Jesuit volunteer year ended, I continue to process the days I spent in the chapels of the three maximum security yards. Often, I have hesitated to share my experience in detail with other people out of fear that they will make light of the sacredness of my experience. Further, I know that words will never do justice to what I encountered.

In 2017, a major piece of the story that I have struggled to tell was shown through the critically acclaimed documentary “The Work.” “The Work” features a four-day intensive group therapy training inside the C-yard chapel at New Folsom Prison. This was the first time that the men’s support group program at New Folsom was recorded on video. “The Work” invites viewers into the depths of human souls as men from inside and outside the prison community courageously embark on the journey of self-discovery and understanding as they work through their deep wounds and their feelings of anger, grief and betrayal.

This cycle of vulnerably diving down into the darkness of one’s woundedness and emerging with new understanding and healing is reminiscent of the Paschal Mystery, a journey that all Christians are called to travel. “The Work” is clear evidence of how God actively participates in the transformation of people when sacred space is created for compassion, vulnerability and authenticity.

The birth of men’s support groups in New Folsom can be traced to a spontaneous pen-pal relationship  that began in 1992 between inmate Patrick Nolan and a public accountant on the outside named Don Morrison. After coming across a couple of poems written by Nolan published in magazines, Morrison decided to write Nolan a letter to express his appreciation for Nolan’s writing. Through this correspondence, a friendship developed over time, and Morrison started to make the 20-minute car ride from his home in Sacramento to visit Nolan at New Folsom.

“The Work” offers a glimpse into the reality that there is a wealth of untapped wisdom, creativity and compassion rotting away in the over 1,800 state and federal prisons in the United States.

During these visits, Nolan learned about a men’s support group that Morrison participated in on the outside through an international organization called The Mankind Project. Nolan told Morrison that this kind of group was needed inside the prison, especially at a time when there was intense racial tension on the New Folsom B-yard. A next step was Deacon Dennis Merino’s proposal for men’s support groups to be included in the Catholic Chaplain Guidelines in California. This proposal was approved by the California Catholic Bishops, and at the end of 1997 after a six month lock down on the B-yard, the first men’s group took place.

The first group of men was recruited by Nolan, a practicing Catholic and leader of a white Aryan Brotherhood gang. Nolan intentionally recruited shot callers (leaders) from multiple gangs, and this first group consisted of men of different races and religious affiliations. The secret weekly gatherings in the B-yard chapel undermined strict prison politics that prohibited men of differing gangs and races to meet in such a manner. In the ensuing years, hundreds of men from the inside and outside New Folsom would experience the transformative effects of working through their deepest wounds in a sacred space filled with love and compassion.

“The Work” offers a glimpse into the reality that there is a wealth of untapped wisdom, creativity and compassion rotting away in the over 1,800 state and federal prisons in the United States. This glimpse invites the public to examine several critical questions. For example, what might society’s throwaways have to teach and contribute to the world outside of concrete walls and razor wire? What light possibly exists in places that are darkened by pain and, anger, suffering, grief and punishment? What would happen if adequate time and money were invested in rehabilitating the two million plus adult prisoners in the United States? And what’s at stake if we don’t?

The bold and brave journeys traveled by the men of “The Work” challenge the public and particularly leaders in public and private sectors to live and lead from a place of honesty and courage and to hold ourselves accountable when we come up short. They challenge us to engage across difference and to risk befriending someone whose politics, religion, race, gender, sexual orientation or culture doesn’t match our own. Living and leading in this way demands that we confront our greatest fears, permit ourselves to be vulnerable, and exhibit compassion and love toward our loved ones and our enemies. “The Work” confirms the awesome goodness and grace that freely flow when people choose to live out of this place.

I am a baptized Catholic who has visited hundreds of chapels, churches, cathedrals and other holy places in multiple countries, and the C-yard chapel in New Folsom Prison is the most sacred space I have ever encountered. Although there is no religious component to the men’s groups, the groups are deeply spiritual, and I consider my experience with the men’s groups a form of church that continues to transform me. The penetrating levels of vulnerability, courage and honesty displayed by the men in “The Work” illustrate that sincere kinship can exist even in the darkest of places.

What might happen if church leaders look to the world’s throwaways for wisdom and guidance?

During a time of immense mourning in the Catholic Church, what might happen if church leaders look to the world’s throwaways for wisdom and guidance? One invaluable teaching “The Work” demonstrates is that reconciliation and healing demand more than words and public statements. The men of “The Work” remind us that wounds must be felt and touched for transformative healing to take place.

The men of “The Work” also demonstrate that the path to transformation is often accompanied by great danger and risk. For inmates at New Folsom, participating in the men’s groups alongside inmates of other races and rival gangs can mean risking one’s physical safety and life out on the prison yard. Nevertheless, they realize that they cannot travel the restorative journey alone and that their perceived opponents can actually offer the love and support they need to heal and grow. What risks might the institutional church pursue in order to regain trust?  What choices and changes might church leaders seriously consider and act on in order to utilize the enormous potential and gifts of members who question whether they have a voice and place in the church?

The men of “The Work” show that a collective effort and support structure are necessary for transformation to take place. The questions raised by this documentary, concerning getting in touch with wounds, taking risks and utilizing gifts, apply to each and every member of the Catholic Church. How might you respond to these questions as an individual and how might your church community respond as a group? These responses will certainly look different from person to person and from one community to the next. However, the fact remains that we all have our work to do. 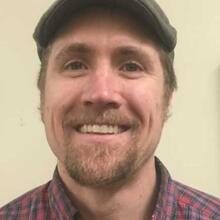 excellent article . It was in the jail that I grew in my faith . There were so many searching here for God .You saw it in their eyes,you heard in their depressed voices,and you wanted to give them hope .

Good article. It have correct information that i did not knew before read this article. This is a good political article.

This article viewer can use my site http://www.payforresearchpapers.com/ for get political research paper.

nice article you have written sir. In india here the peoples who are in jail are working nine hours to earn just few money for survival. But this is good habit to knew that life is about ups and down. In jail they learn so many good things and cames back again to live new life. nox

In india here the peoples who are in jail are working nine hours to earn just few money for survival.
nox player 6