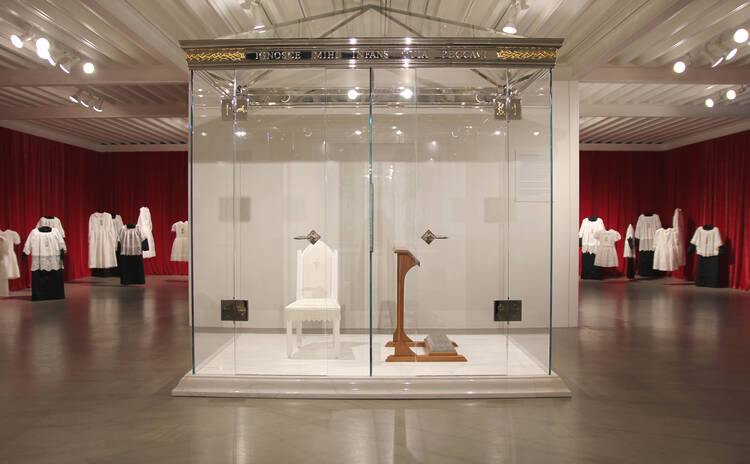 Eight years ago, the Irish-born artist Trina McKillen returned to Dublin to discover that her elderly mother no longer wanted to go to Mass—the ongoing revelations of clerical child abuse were just too much.

This was a woman who had nine children “because you have as many children as God gave you,” Ms. McKillen told a gathering of over 200 people at Loyola Marymount University a week ago. Her mother had an image of the Sacred Heart across from her bed; “she used to say, ‘The Sacred Heart is my best friend.’”

“For me, she was the church,” Ms. McKillen told the crowd. “And here she was walking away at the age of 84 from her spiritual home. I felt I had to do something. It’s not right for my mother not to have her refuge.”

The body of work consists of a series of pieces that evoke the grief and horror that surround the sexual abuse crisis.

What came of that desire to help her mother and others like her is “Confess,” an art exhibit having its Los Angeles debut over the next two months at L.M.U.’s Laband Art Gallery. The body of work consists of a series of pieces that evoke the grief and horror that surround the sexual abuse crisis. “Bless Me Child For I Have Sinned” is an exquisitely crafted life-size glass confessional, with a white child’s chair sitting in the place normally occupied by a priest. In “The Children,” 20 altar server garments and 20 First Communion dresses hang in a small, red-curtained room; in “Stations of Hope,” a darkened space holds 14 framed stations offering a set of faint twinkling lights.

The idea of mounting an exhibition that takes on the crisis of abuse and cover-up in the Catholic Church seems both essential for the Catholic community right now and near impossible to render palatable. Ms. McKillen had no illusions her work would be easy: At the exhibit’s opening she described dinner parties where artist friends would “recoil” when she mentioned the work she was doing. She felt “unbelievable anxiety” at the thought of how Catholics might respond.

Learning to be Quiet with Tomie dePaola
America Video

In retrospect she did not have to worry. More than anything, what distinguishes this exhibit is its respect and care for the viewer. Rather than rubbing our faces in the horror of what has happened or trying to convey some sort of pedantic message,  what Ms. McKillen sets out to offer with “Confess” is a set of contemplative spaces in which people are allowed to get in touch with their own varied feelings and experiences.

For instance, in the central piece of the exhibit, the glass confessional, there are no figures present, no priest nor child. There is just the hand-carved wooden kneeler on one side, and across a glass screen a small white chair with a tiny cross sewn into the back and lit from within. With its pure white color and frail, slightly bent legs, the chair evokes vulnerability and innocent childlike beauty. But that is as far as Ms. McKillen takes it. The rest is up to us to bring, which as it turns out is a tremendous gift; for as much as we have heard and read about the abuse crisis over the years, standing before this empty confessional you come to realize how rarely we have been invited within or outside the church to simply be with and process that reality. The emptiness and transparency of the confessional in a sense provides a space outside of us in which we can place our feelings and look upon them.

In the second room, 40 children’s church garments hang on thin transparent strings, each at a child’s height. The air currents in the room cause some of the garments to occasionally sway in ways that are uncannily child-like. Once you are aware of the motion it becomes clear that almost all of the figures are moving at least slightly.

The room is so small that only a few people can enter at any one time. The space becomes an invitation to a profoundly personal experience. It is a space for you to be with your thoughts and feelings. And the longer you stay, the more the garments shift from a set to distinct individuals: the little girl in her baptismal dress who stands in the corner of the room by herself, her belt tied in the front in a whimsical white bow; across the room, a taller, slightly older girl, the front of her lace dress almost heart-shaped in pattern.

“The children were silenced,” Ms. McKillen comments in her description of the piece.

Perhaps the most mysterious piece of the exhibit is the last room, which is filled with tiny squares of Irish linen framed and lit from within. Nothing here explicitly suggests children, abuse or for that matter the church. Yet when Ms. McKillen first set out to create some sort of response to the abuse crisis, it was with these small linen fragments that she began. She had fond memories of two aunts working in a textile factory in Northern Ireland, and found creating these little rectangles out of linen comforting. “I’m just doing them because they make me happy,” she told her parents.

Over time she came to see the linen cuttings as a sort of poultice, a bandage used in healing. And in that dark room there is a sense of each piece of cloth caring for or protecting something precious. A tiny light—similar to a devotional candle—flickers behind or within each piece of linen. Most are dim, their fragility suggesting vulnerability or perhaps brokenness, convalescence.

But once you have been there a while, you begin to notice some of the lights occasionally brighten. Here and there (all around you, in fact) the dim flickers are replaced by beams that pour out from the linen like the rays of the sun. Each beam is almost a notice that something is freed; a life is transfigured.

When Ms. McKillen arrived for the opening, she was struck by the sound of the bells from L.M.U.’s chapel. In Ireland, the bells of the church are always there, she explained to the crowd, whether signaling the Angelus on the radio or echoing outside off the hills. “It’s a welcoming sound,” she told the gathering, “[one that says] that you’re home, that you belong.”

In the face of the abuse crisis so many of us feel like Ms. McKillen’s mother, orphaned and grief-stricken. Paradoxically, by offering people a holy space in which to consider their own feelings of outrage and devastation, “Confess”offers the possibility of something more—a release of sorts, and a sense of being on a path, finally, toward home.

“Confess” is on view at L.M.U.’s Laband Art Gallery from now until March 23. Admission is free. The university is also offering a series of lectures, prayer services and other conversations in conjunction with the exhibit. More information can be found at cfa.lmu.edu/labandgallery/exhibitions/.

This seems like a very potent art exhibit. I like the idea of using art to help unwind the many knots of pain. The part that uses children's sacramental type clothes in the wind to make them appear as moving children I can almost picture this in my mind.

I so wish I could experience this show. I hope it travels!!

thank you for this brave attempt Ms McKillen to get our heads around the unthinkable. This exhibit is probably worth more than a thousand Bishops' prayers. 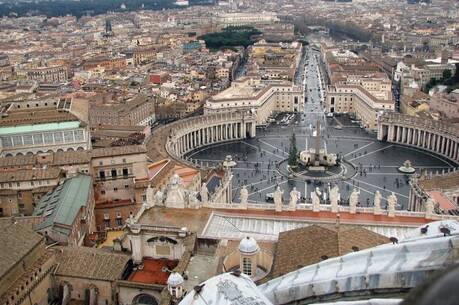 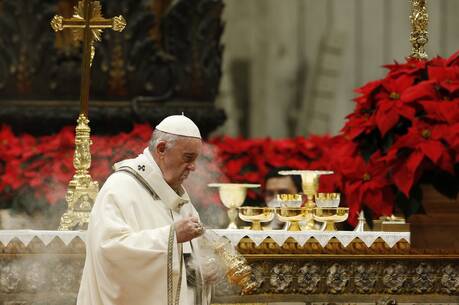