Why is a 1960s film about a nun still controversial? 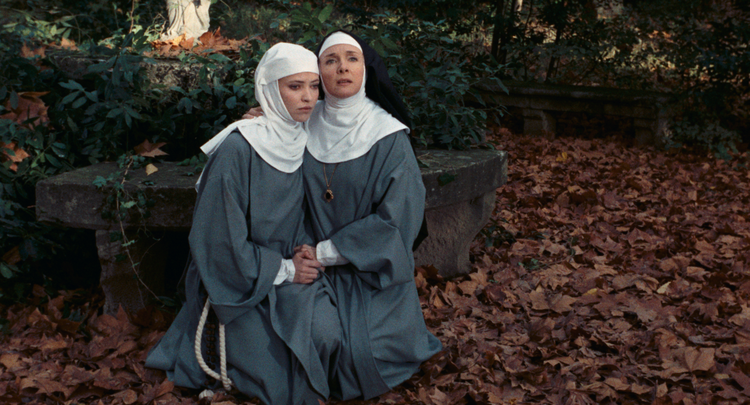 Any connections between Mark Twain and the New Wave filmmaker Jacques Rivette probably seem tenuous, but here is one: Every few years, there is a move by someone somewhere to ban The Adventures of Huckleberry Finn, usually by people who have not properly read the book. (Let us just say that “N-word” Jim, Huck’s pal, is by far the noblest character in the novel.) Similarly, Rivette’s mid-’60s sociopolitical parable “La Religieuse”—the tale of a nun’s torment in the convents of 18th-century France—has been assailed as an attack on the church itself. And by people who had not even seen the film.

As audiences will see, “La Religieuse” is far less about the Catholic Church than it is about the abuse of power and the rights of an individual versus the collective.

As the critic J. Hoberman wrote in a recent article in The New York Times, “Even before it was completed in 1965,” Rivette’s film—based on the Denis Diderot novel published posthumously in 1796—was “twice approved for release by the Censorship Board [and] twice blocked by the Minister of Information. Mention of the ban was itself banned on French TV.” It was, thanks to knee-jerk hysteria, a scandale.

You can’t buy that kind of publicity.

The Catholic League has come out against “La Religieuse,” which after a 4K restoration from its original negative has opened theatrically at New York’s Film Forum (from where it will soon travel west). As audiences will see, “La Religieuse,” or “The Nun,” is far less about the Catholic Church than it is about the abuse of power and the rights of an individual versus the collective. (It is surprising now that no one in the ’60s saw it as anti-Communist.) Diderot may have had his own agenda, but Rivette’s motivation seems to have been one almost of convenience: The convent system of 18th-century France, into which inconvenient women, young and old, could be banished for the price of a dowry, provided him an ideal world in which to explore the themes of oppression and institutionalized cruelty. It also, being a period piece, provided an apt backdrop for Rivette’s austere yet vivid palette, his calibrated framing and his poetic movement of objects in space.

There are no theological arguments made in “La Religieuse.” Suzanne’s faith is firm.

Chief among those objects is Suzanne Simonin (New Wave muse Anna Karina), a woman with no religious calling who, in 1757, is committed to Longchamp Convent. As her mother (Christiane Lenier) reveals to Suzanne, she is illegitimate and must be put aside in deference to her husband’s daughters. What better place than Longchamp?

The distraught Suzanne finds solace in a kindly mother superior, Madame de Moni (Micheline Presle), but upon de Moni’s death Suzanne’s continued resistance to her de facto imprisonment brings the wrath of the sisterhood down on her head. She is ostracized, starved, dressed in rags and shunted from one bad cell to the next. “La Religieuse” was originally conceived as a stage play and the staginess remains; Suzanne’s “torture” is mostly psychological and her suffering, as is the case with most of the portrayals in the film, is delivered with quite a bit of melodramatic anguish.

There are no theological arguments made in “La Religieuse.” Suzanne’s faith is firm, her Christian belief a monument to itself, given her treatment. But again, the convents serve as metaphors, the story of Suzanne representing not spiritual soundness but human desire, both for freedom and the flesh. In the second convent to which Suzanne is consigned, the Mother Superior (Liselotte Pulver)—who dresses in a lace-edged wimple and a pearl necklace the size of a life preserver— becomes so erotically fixated on Suzanne it drives her to madness. It is a movie of extremes, like “Black Narcissus,” the Powell and Pressburger classic of 1947 set among nuns in the Himalayas. And there, too, one is hard pressed to find any specifically anti-Catholic element in the narrative.

The opening moments of “La Religieuse” include a lengthy disclaimer, the history of which is indicative of the film’s knotty history. As the film critic Kevin Jackson explained: “It was as early as 1962 that Rivette first took Jean Gruault’s scenario to the board responsible for issuing production visas. He was rejected. Despite being rewritten and trimmed of its offending material, the script was turned down three times in all, and eventually passed in a bowdlerized version on the understanding that it would be retitled as ‘Suzanne Simonin, La Religieuse de Diderot’ and furnished, by the producer Georges de Beauregard, with a disclaimer pointing out that it was a work of fiction and not a comment on modern-day convent life. These laborious negotiations took the better part of three years, and it was not until September 1965 that Rivette was at last able to begin shooting.”

But begin he did. Against all odds. The result is an eccentric and enigmatic film.

Thank you for this fair and moving review. “Inconvenient women” is such a chilling, and telling term. Timely re-release. I hope it comes to my city.

Nun still controversial and silence but don’t get too comfortable for the real ideas. This blog is a special blog and this is related with some essay writting services ideas. All the readers will try to understand the value of this blog.

I don't think it should continue the controversy though there are number of films coming with the same concept but most of them are out of issues and they won't get sued anyhow. I have recently watched this film on newpipe app along with the "The NUN" which is released in 2018.

Reading this review I could not help but think of all the Catholic students whose descriptions of their classroom experiences sort of mirror the plot of the film, which I have never seen. The human condition is very broad and not necessarily anti-Catholic, merely a solid description of people's experiences when they do not conform, an experience which I never had but know lots who did..