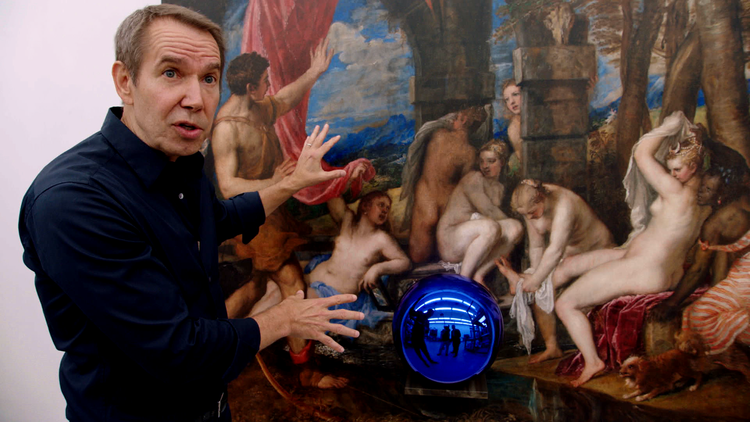 “Art and money have always gone hand-in-hand,” declares an unidentified male voice at the beginning of “The Price of Everything.” “It’s very important for good art to be expensive,” the voice continues over scenes of workers buzzing around before a highly-anticipated Sotheby’s art auction. “The only way to make sure cultural artifacts survive is for them to have a commercial value.”

The voice, we later learn, belongs to the Swiss nobleman Simon de Pury—considered the “Mick Jagger” of art auctioneers—who is part of a veritable Greek chorus of modern-art market luminaries populating Nathaniel Kahn’s recent documentary on HBO. Together, they hold forth with gaudy self-confidence to confirm and sanctify these allegedly indisputable truths of art and commerce. All the while, Kahn’s camera gazes into what appears to be a fever dream of one percenters and their enablers.

The fact that a “Mick Jagger” of art auctioneers exists should be evidence enough that we might be dealing with a rarefied, and somewhat ridiculous, world. But instead of cheap satire in Kahn’s skillful hands “The Price of Everything” resembles a latter-day “Roger and Me” for the modern art world. In that 1989 classic, Michael Moore chronicles the decline of his hometown, Flint, Mich., after General Motors closes factories there. The contrast Moore highlights between the desperation of out-of-work autoworkers in a dying city with G.M. executives throwing Gatsby-themed parties and presiding over record profits is stark and repulsive.

“The Price of Everything” resembles a latter-day “Roger and Me” for the modern art world.

In a sense, we—the other 99 percent—are stand-ins for Flint in “The Price of Everything.” Except this time around, in a parallel to our current socioeconomic reality, we are practically erased from the narrative. It is as if the roar of the economic engine of progress has finally succeeded in drowning everything else out.

“There’s a lot of money kicking around and there’s a limit to where you can put it,” says Stefan Edlis, an affable Chicago-based art collector in his 90s. Kahn returns to Edlis all through the film as he walks the viewer through his collection and Edlis discusses, with the help of spreadsheets, his purchases and the current value of various pieces. “There’s a lot of people that know the price of everything and the value of nothing,” he says to Kahn with a smile. Edlis and his wife recently donated half a billion dollars worth of their collection to the Art Institute of Chicago.

Edlis’ point resonates throughout as discussions of art and beauty begin to feel like thinly disguised talking points about assets and tax shelters. “Up in the higher reaches of the treetops there’s a different ecosystem where art absolutely is an asset class,” says the art dealer Gavin Brown. “That’s essentially what the auctions have become, a trading house for assets.”

It is a surreal world in which the counter-narrative to extreme wealth and the orgiastic pursuit of valuable objects manifests in the person of Larry Poons. Poons, a cantankerous 81-year-old, was once a darling of the modern art market in the 1960s and ’70s but fell out of favor because he refused to continue to paint in the style that won him renown. “It was a betrayal of the career charisma,” he tells one dealer. “And that was easy for me to deal with because I wanted to be like Mozart or Beethoven. The first piece ain’t looking like the last piece.”

“There’s a lot of people that know the price of everything and the value of nothing."

Kahn juxtaposes Poons in his broken down barn/studio in upstate New York with Jeff Koons, the most financially successful artist alive today. Koons speaks in seductively dulcet tones about his work while, in the background, scores of assistants work with assembly-line efficiency on his pieces in an immaculate workshop. The contrast is jarring and grotesque, but at times it also feels a bit facile with Poons playing the saint to Koons’ commerce-friendly demon.

“This is like a money shot,” says Amy Cappellazzo—using a term not appropriate for a family magazine—regarding a photograph of Willem de Kooning in front of his painting that she is about to bring to auction. As Chairman of Sotheby’s Fine Art division, Cappellazzo embodies the intersection of art and commerce. Kahn’s camera lingers uncomfortably on her in a close up as she comments on pieces in an upcoming auction that will bring in hundreds of millions of dollars.

“Living with a picture like this could change your life. If you let it,” she says of a Gerhard Richter piece. When Kahn asks coyly how that could happen, she answers, “I mean very few of us live with such majesty. Truly.” It is not difficult to imagine the word “picture” being just as easily replaced by the term “vintage Corvette convertible” without losing much of the statement’s thrust. One wonders how sustainable this all is.

As auction items are being sold for hallucinatory prices and then being carted off to sit in storage, it is hard to imagine how this absurdity ends. “The reckoning has begun. This is the end of empire,” says the New York magazine art critic Jerry Saltz.

“I think art itself is having a hard time finding its way out of the situation,” says Gavin Brown at the Frieze Art Fair in London. “I think everybody knows we are careening toward some edge or some end.” To which Saltz wonders aloud if perhaps the reckoning has begun. “I’m not sure,” replies Brown. “I think I can smell smoke.”

Very nicely explained this post.. Check out for technology news and reviews Future is web

Well composed, great song and nice lyrics too. singer Simi is also a good song writer I admire a lot.