Kanye West, S.N.L. and the incoherence of modern life 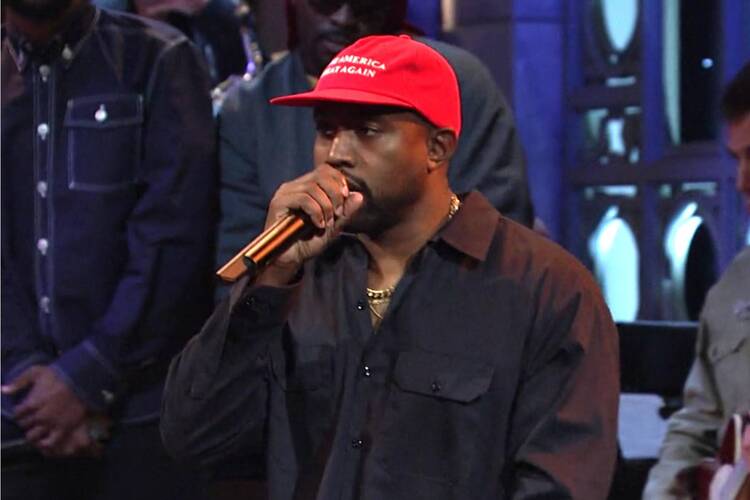 In the weeks leading up to his appearance on the season premiere of “Saturday Night Live,” Kanye West tore through Twitter like the Tasmanian Devil, announcing a name change—he now goes by “Ye”—and a new album, “Yandhi.” (He said it would be released on Sept. 29, the night of the “S.N.L.” premiere. It has yet to drop.)

The universe needs Ye and Wayne music at the same time

Usually each “S.N.L.” episode ends with thank yous and hugs between cast and crew. This time, after the episode host Adam Driver said a brief thank you, everyone evacuated the stage, leaving Mr. West, sporting a red “Make America Great Again” hat, to perform “Ghost Town.” “Oh, once again I am a child,” crooned the rapper 070 Shake, who is featured on the track. “I let it all go (go), of everything that I know, yeah/ Of everything that I know, yeah/ And nothing hurts anymore, I feel kinda free/ We’re still the kids we used to be, yeah, yeah.”

Mr. West also used his encore to rant. The comedian Chris Rock took a video from his seat in the audience and shared it via Instagram Stories.

“There’s so many times I talk to, like, a white person about this,” said Mr. West, “and they say, ‘How could you like Trump? He’s racist.’ Well, uh, if I was concerned about racism I would’ve moved out of America a long time ago.”

Mr. West styles himself as an individualist, a Whitmanesque container of multitudes. Throughout 2018, his contradictory opinions, half-formed dogmas and surrealist artistic ventures, typically communicated through Twitter, have continued to captivate, not because they make any sense, but because in their own mysterious way they are a distillation of these topsy-turvy times. Of all the competing ideas, memes and political brouhaha we are reading about and watching day in and day out.

On “S.N.L.,” he sounded a lot like his Twitter account. In the past few weeks, he has tweeted about love and Daoism (whose three foundational virtues are frugality, compassion and humility), while re-establishing his #MAGA bona fides.

The 2018 V.M.A.s, brought to you by Pepsi and angst
Brandon Sanchez

Earlier this year, Mr. West resurfaced on Twitter after a hiatus that spanned most of 2017. His comments about slavery being “a choice” and his support for President Trump and the conservative Fox News commentator Candace Owens parlayed themselves into a news cycle that lasted a week—no minor achievement. Commentators leveled criticisms and traced ideological lineages. Using the tweets as primary sources, they deemed Mr. West a toxic brew of self-reliance rhetoric and attention-hungry celebrity culture and iconoclastic rage. (With Twitter, we’re used to poring over these things like amateur-hour Sherlocks and literary critics, decrypting bite-size communiqués as if the fate of the world depended on it.)

It is hard not to see the rapper as the embodiment of a country rent apart.

Sometimes a slapdash viral tweet is just a slapdash viral tweet, composed by someone very famous who sells pricey running shoes. At the same time, symbolism is fun, and it is hard not to see the rapper as the embodiment of a country rent apart, a nation of Kaepernicks and Trumps staggering woozily through an identity crisis anchored in dream logic.

The day after “S.N.L.,” Mr. West tweeted something that read in part, “We will no longer outsource to other countries…. We will provide jobs for all who are free from prisons as we abolish the 13th amendment. Message sent with love.” The tweet was accompanied by a photo of Mr. West in his red MAGA cap, riding on what appeared to be a private jet. A couple of hours later, he issued a correction: “not abolish but. let’s amend the 13th amendment…. We apply everyone’s opinions to our platform.”

not abolish but. let’s amend the 13th amendment

We apply everyone’s opinions to our platform

Mr. West, like Mr. Trump, is id-made-flesh, an extreme and uncomfortable example of what we all look like when turned inside out: bundles of nerves and disconnections, self-delusions and shattered glass and a big pile of scribbles.

Because in the end, Mr. West’s often inscrutable belief system has a companion in the bizarre set of contradictions endemic to modern life. I own a futuristic cell phone that people living in a sad Shenzhen factory compound toiled to manufacture. I keep using Facebook even though the company (and Google) is sweeping my data into some National Security Agency dustpan. I add motorcycle jackets to my Amazon cart while talking smack about consumerism.

There comes a point in “Ghost Town” when Mr. West raps, “Sometimes I take all the shine/ Talk like I drank all the wine.” The rest of America is draining bottles right along with him.

Mr. Sanchez, your result based article itself is shocking. It is so inconceivable to you that a Black Man could support Donald Trump that you have written your own diatribe -- itself filled with prejudice and hate justified by logic worthy of a lesser luminary. Can you not conceive of some truth in what Donald Trump stands for? Does the superficial and dope-smoking crew at SNL define your world view -- and are we supposed to look to those people to define our own world view? Joseph A. O'Hare would not be proud of the level of intellectual misfeasance you have articulated in this article to represent his values. Please, open your self to objective, articulate analysis.

"Can you not conceive of some truth in what Donald Trump stands for?" Absolutely. He stands for the truth of the "ugly American," and the truth that racism and bigotry still can hold power and sway in a modern society. He stands for the worship of white mediocrity and the ability of a wealthy, below-average intelligence, below average ability white man to take up an immense amount of space from others.

A black man is incoherent because he says something positive about Trump. Sound racist to me.

Kanye West and Lil Wayane are both my favorite rappers should do something for the society as well apart from Saturday Night Live, what I mean to say is they can use the social media platform and interact with their fans poor or rich doesn't matter and help them in motivating them

This is a great article. Thank you for sharing it.

If you would stop twitting with the twits, you might be better off.

BAD BAD BAD on so many levels, most importantly the mental health front and more bad Catholic PR. Please take it down, Mr. Sanchez.

Completely disagree! This is a great article that addresses many relevant contradictions in modern society. Very well written.