Review: The Troubles bring trouble to a farm family in Northern Ireland 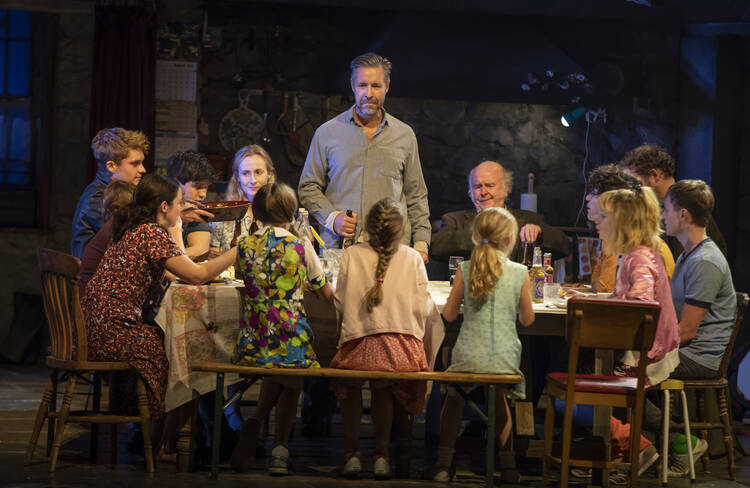 A play makes a world as surely as it tells a story, whether it is Shakespeare’s Illyria or August Wilson’s Hill District. And when a play makes a world as rich and lively as the Irish farm kitchen in which Jez Butterworth sets his new tragedy “The Ferryman,” now on Broadway after an acclaimed London run, it can feel an embarrassment of riches compared to the economical two- and three-actor casts that have increasingly become the norm on U.S. stages.

Within the play’s first hour—there are more than three of them, another instance of its overabundance—we are introduced to 18 actors of multiple generations, as well as a rabbit, a goose and, most scene-stealing of all, a baby. The play’s second act opens with just two people on opposite ends of the stage: the aged Aunt Maggie (Fionnula Flanagan), gaping absently from a wheelchair, and the baby, lolling contentedly on a blanket. Here, the play would seem to say, runs the span of a life.

In the fallen world of “The Ferryman,” conflict and compromise poison everything.

And not an untroubled one: The baby’s given name is Bobby, after the Irish Republican Army martyr Bobby Sands, who in 1981 led a hunger strike while in British custody that is grinding on fatally as the play opens. It is harvest time at the County Armagh farm of Quinn Carney (Paddy Considine); and while his seven children squabble and cavort, a flinty spinster aunt, Pat (Dearbhla Molloy), keeps tabs on the latest turns in the Troubles, confessing that her most fervent prayer is for Margaret Thatcher’s disembowelment. Militant old Aunt Pat is a bit of an outlier in this rural family, whose members seem more concerned about the escape of the harvest goose than about the political fate of Northern Ireland and whose ranks also include for good measure an Uncle Pat (Mark Lambert), wild-haired and whisky-fueled and prone to lyrical speeches. This is Butterworth’s maximalist approach in a nutshell: Why have only one old Pat when two will do?

But the Troubles cannot help but rear their head in the Carney house, not least because it harbors one of their more thoughtless casualties: Quinn’s sister-in-law, Caitlin (Laura Donnelly), whose husband, Quinn’s brother, disappeared 10 years prior, apparently at I.R.A. hands. Stranded in the terrible liminal space of the almost-widow, Caitlyn has held on by becoming a de facto matriarch opposite Quinn, whose own wife, Mary (Genevieve O’Reilly), an invalid, seemingly wastes away in an upper room. When the body of the missing Carney is found in a peat bog, the news is both welcome and unwelcome: It may hold out the promise of closure but at the cost of a household forged in the shadow of uncertainty.

When the body of the missing Carney is found in a peat bog, the news is both welcome and unwelcome.

Under Sam Mendes’s direction, Butterworth’s play moves inexorably from one kind of light to another: from ebullient merriment to blinding clarity. “The Ferryman” does not make this movement quickly, however. Unlike “August: Osage County” or Butterworth’s last epic, “Jerusalem,” this is a big, long play whose size and length you can feel. A drama stuffed with this many characters and freighted with so much history arguably does demand and justify a grand scale. But “The Ferryman’s” occasional longueurs, unfortunately, give us time to notice flaws. The most glaring is its characterization of a trio of I.R.A. heavies as cold, glib mobsters, which in turn raises larger questions about the portrayal of the Northern Irish conflict by a playwright and a director who are English. Though we hear plenty about atrocities and indignities visited by the English on Ireland, which have radicalized a few characters, the play’s portrait of an idyllic, apolitical Irish farm life threatened chiefly by other Irishmen feels askew. And while there certainly were priests who collaborated with the I.R.A. at the height of the Troubles, the play’s depiction of poor, craven Father Horrigan (Charles Dale) seems singularly unforgiving.

But this bleak picture is of a piece with the fallen world of “The Ferryman,” in which conflict and compromise poison everything, not just the sacraments but childhood and mirth as well; and the Stygian boatman referred to in the play’s title comes for us all. It is a tragic vision, to be sure, but delivered in such a sumptuous feast of a production that it is hard to resist pulling up a chair, pouring a whisky and joining the toast.

Thanks for this insightful column. It would be so nice if plays like this could be produced outside major cities. But that will never happen unless someone adapts the script to four actors, with perhaps one or two actors playing one to three roles.