Who is the better songwriter: Bob Dylan or Rodgers & Hammerstein? 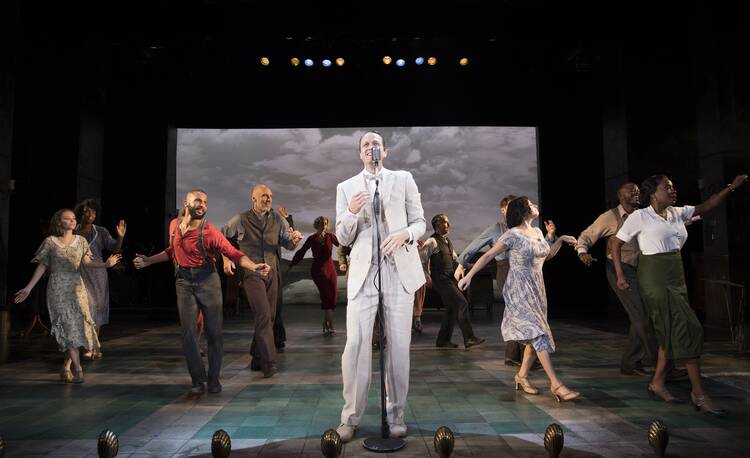 The cast of “Girl From the North Country” (photo: Joan Marcus)

The polished, optimistic musicals of Rodgers & Hammerstein and the free-wheeling, poetic folk-rock of Bob Dylan emerged only a few decades apart. And while it would be hard to find artists further apart aesthetically, the work of all three is as deeply American as, well, musical theater and rock ’n’ roll—rival forms that once cleft a generation but have since reached a profitable truce on Broadway, as it is now hard to find a musical not based in rock, pop or hip-hop sounds.

But something stranger has happened to the once-revolutionary, now-canonical oeuvres of Dylan and Rodgers & Hammerstein, on the evidence of two productions now playing Off Broadway (to the kind of rapturous reviews that all but assure a transfer to Broadway). In “Girl From the North Country” at the Public Theater, Dylan’s back catalog is pressed into service as a somber, even somnambulant backdrop for a Depression-era tale of American heartbreak. Meanwhile, a new staging of “Oklahoma!” at St. Ann’s Warehouse makes that corn-fed chestnut sing, and singe, with fresh suspense and immediacy. How did an old war horse manage to outrun a rolling stone?

How did an old war horse manage to outrun a rolling stone?

One answer is to look to the directors and their respective visions. Conor McPherson, the first-rate Irish playwright of “The Weir” and “The Seafarer” (and my personal favorite of his, “Port Authority”), has staged “Girl From the North Country” as a kind of old-timey radio-show revue, with Dylan’s songs punctuating an overstuffed drama of his own concoction. McPherson has his characters, denizens of a purportedly down-at-heels Minnesota boarding house in 1934 that nevertheless flows freely with booze and vittles, step aside from the narrative to sing exquisite arrangements of mostly unrelated Dylan songs into a vintage ribbon microphone. The effect is both shambolic and oddly reverent, turning Technicolor poetry into black-and-white photography.

Meanwhile what Daniel Fish, a practiced Shakespearean and avant-gardist, brings to “Oklahoma!” is a kind of devotional irreverence. Staging the show in contemporary clothes in a brightly lit plywood box, Fish homes in with laser-like intensity on Hammerstein’s text, both drama and lyrics—and extracts similar solicitude with Rodgers’s score from Nathan Koci, his music director—to give this 75-year-old work a conversational, almost naturalistic intimacy, while unleashing the full power of both its hoary comedy and its unnerving sexual drama.

A new staging of “Oklahoma!” makes that corn-fed chestnut sing, and singe, with fresh suspense and immediacy.

Fish introduces some innovations of his own: There is an odd, somewhat half-baked take on the show’s dream ballet, choreographed by John Heginbotham, and Fish’s startling ending bends the shape of Hammerstein’s love triangle between the swaggering cowboy Curly, the equivocal farm girl Laurey and the stalker farmhand Jud. This latter departure recalls the way I have seen some directors subvert the ostensibly happy endings of such problematic classics as “The Merchant of Venice” or “The Taming of the Shrew”; even the current Broadway revival of “My Fair Lady,” though otherwise impeccably conventional, has Eliza walk out on Henry at the end. Such approaches may be arguable distortions, but at best they force us to reflect on our own warped narrative expectations—to show us that the distortion is in us, too. Do we really crave vengeance on Jud, a combustible mix of class anxieties and sexual frustration played here by Patrick Vaill as a scrawny, pathetic incel? His death feels as inevitable as in any production of “Oklahoma!” but lacks the blithe moral certitude.

If Dylan is to be theatricalized convincingly, he and his songs will have to have something to do with it.

The other obvious place to look for clues as to the variable way these two musicals fare is in the material itself. The Nobel-winning Dylan has nothing to prove as a songwriter; he has written picaresques, jeremiads, gospel tunes, love ballads, straight-up pop songs and unstable mixes of all of the above. What he has not written are songs for the theater, and no amount of strenuous effort on McPherson’s part can conceal it. When Elizabeth (Mare Winningham), a middle-aged woman with apparent dementia—albeit the kind of theatrical mental illness that selectively flickers between non-sequitur and cutting one-liner and provides an excuse for any kind of behavior—breaks into a few stanzas of “Like a Rolling Stone,” it marks both the production’s high and low point. The lyric’s sympathetic resonance lands anew, “how does it feel” sounding less like a challenge than a sincere inquiry. But it has got less than nothing to do with the gimcrack play McPherson has constructed around it, a virtual flipbook of cliches from the midcentury American drama of Steinbeck, Miller, Odets, Wilder.

I have to admire McPherson’s ambition; in the absence of any input from Dylan other than blanket permission, he has crafted a playlist with many deep cuts from the songwriter’s less beloved ’70s and ’80s albums, including the Christian ones, to sometimes bracing effect. But if Dylan is to be theatricalized convincingly, it seems to me, he and his songs will have to have something to do with it.

Rodgers & Hammerstein’s works can have the opposite problem: They can seem so of a piece and of their time that they have nothing to say outside their perfectly crafted theatrical worlds, like dollhouses filled with doilies. But craft can be underrated, and for all Hammerstein’s open-hearted, old-fashioned sentimentality, his dramaturgy was sharp and his lyrics airtight, especially sitting atop Rodgers’s bursting-with-flavor tunes.

That last element is most crucial. Particularly as delivered in the new production by Damon Daunno, whose Curly seems made of equal parts Jeff Buckley and Montgomery Clift, and Rebecca Naomi Jones, a mercurial Laurey who somehow conveys wildness, gravity and innocence all at once, the songs of “Oklahoma!” feel both indestructible and supple, fresh as dew but old and essential as water. This theatrical vividness comes through even in the show’s instrumental moments; as the show’s wackadoo dream ballet recedes, and a pedal steel guitar exhales the yearning tune of “Out of My Dreams,” we are in the same old, weird America that once fired the imagination of a young songwriter from Duluth, Minnesota.

Hands down. Hammerstein. Song writer implies words. Rodgers wrote incredibly beautiful music. Best of both was Cole Porter. But they are long forgotten by today young. Except I saw recently a talented young lady use "Anything Goes" for her song to audition for a high school show.

Hands down, Dylan. But, I hate show tunes.

This is an awful and specious comparison. Apples and tigers. By what measure? For what reason? Why?

I agree. If I could write music like either one,I might dare to judge, but, yes, why, especially such different musical forms?